The publisher Publisher of the media / book has provided me with a review copy at no cost. Opinions are my own. Destroyer of Light by Jennifer Marie Brissett
ISBN: 1250268656
Published by Tor Books on October 12, 2021
Pages: 304
Format: eARC
Source: Publisher
Goodreads

Praise for DESTROYER OF LIGHT

“[A] dark, poetic tale of struggling human colonists and ambiguously motivated aliens on a distant planet. Brissett uses the alien setting to explore contemporary issues, including racism, the complexities of allyship, and the trauma experienced by child soldiers. The author’s updated take on a classic myth is both clever and entertaining…Richly developed and profound” —Kirkus, Starred Review

“Destroyer of Light grapples with themes of both the human and post-human experience in a way that is wholly original and seductively engaging. Brissett builds a richly layered and imaginative world that reflects much of our own―the good, the brutal, and the truly monstrous―while daring us to dream of something more. This is a tale not only of becoming and transformation, but about the choices we make that bring us to our destinations. In a time of new, meaningful, and thrilling science fiction, Destroyer of Light is a must read.” ―P. Djèlí Clark, Hugo Finalist and author of The Haunting of Tram Car 015

“A saga that combines many of sf’s most beloved tropes―a remnant of humanity struggling to survive on a far away world, aliens whose goals are dangerously unknowable, alien/human hybrids with unpredictable abilities, suspense, plot twists, and that good old sense of wonder. Hugely ambitious, impressively accomplished.” ―Karen Joy Fowler

“Destroyer of Light confirms Brissett as one of our finest and most ambitious novelists. A world-spanning epic that explores and explodes what it’s like to be both human and post-human. Gorgeously written and heartfelt, it’s quite simply one of the best books I’ve read in a very long time.” ―Elizabeth Hand, author of The Book of Lamps and Banners and Curious Toys 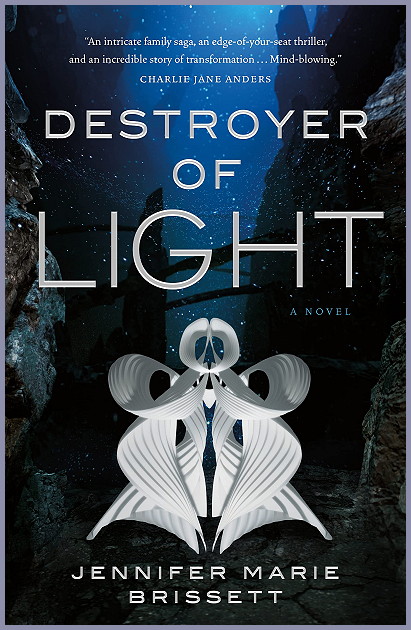 Having destroyed Earth, the alien conquerors resettle the remains of humanity on the planet of Eleusis. In the four habitable areas of the planet—Day, Dusk, Dawn, and Night—the haves and have nots, criminals and dissidents, and former alien conquerors irrevocably bind three stories:

*A violent warlord abducts a young girl from the agrarian outskirts of Dusk leaving her mother searching and grieving.
*Genetically modified twin brothers desperately search for the lost son of a human/alien couple in a criminal underground trafficking children for unknown purposes.
*A young woman with inhuman powers rises through the insurgent ranks of soldiers in the borderlands of Night.

Their stories, often containing disturbing physical and sexual violence, skate across years, building to a single confrontation when the fate of all—human and alien—balances upon a knife’s-edge.

The story follows the aftermath of the krestge who destroyed Earth and the humans who escaped to Eleusis which took centuries to reach.  Cora now renamed Stefoni, is married to Dr. Okoni who leads the rebel force and since she has special powers is expected to carry out his plans.  There is also a secondary plot of twins that also have special powers and are tracking a boy.

Those are the basics and this is basically a battle of light versus dark and good versus evil.  The story is compelling but I lost track at points.  This story is loosely based on the story of Persephone and her abduction into the darkness of the afterlife by Hades.  There is violence in this story which is why this was a difficult read for me.  That and the timeline changes going back and forth between decades, months, and minutes.

You can purchaseDestroyer of Light at the following Retailers: 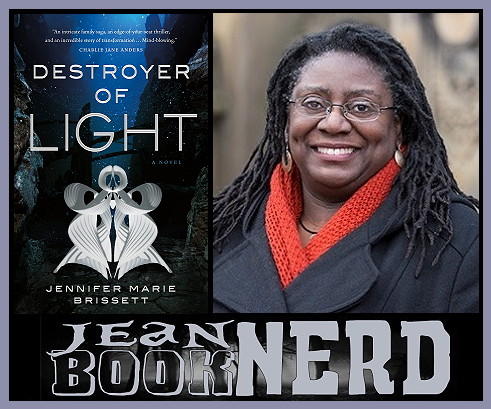 JENNIFER MARIE BRISSETT has been a software engineer, web developer, and the proprietor of Indigo Café & Books in Brooklyn. She has a Masters in Creative Writing from the Stonecoast MFA Program. Her stories can be found in Lightspeed Magazine, Motherboard/VICE, Uncanny Magazine, and FIYAH Magazine amongst other publications. Her debut novel, Elysium (Aqueduct 2014) received the Philip K. Dick Award Special Citation and has been a finalist for the Locus Award for Best First Novel and the Tiptree Award.

#Giveaway Review THE GIRL IN THE ’67 BEETLE