I am thrilled to be hosting a spot on THE PSYCHIC’S MEMOIRS by Ryan Hyatt Blog Tour hosted by Rockstar Book Tours. Check out my post and make sure to enter the giveaway!

Read for FREE with a Kindle Unlimited Membership!

In The Psychic’s Memoirs, a hot-tempered Los Angeles detective and his distracted partner are assigned to find an alleged teenage psychic whose capture might determine the outcome of a looming civil war and humanity’s relationship with a misleading alien force. The standalone novel is part of Ryan Hyatt’s Terrafide series, techie tales of woe and hope in which characters grapple with a world falling apart. The Terrafide universe, which also includes Rise of the Liberators and Stay Younger Longer, takes place on an alternate timeline that mirrors and mimics present-day events.

Praise for The Psychic’s Memoirs:

“A mind-warping journey through an all-too-plausible near-future America where sociopolitical revolution and advanced technology represent the promise and peril of human evolution.”–Jake Anderson, author of Gone at Midnight: The Mysterious Death of Elisa Lam

Check out the other books in the Terrafide series!

Philip Dick. He’s been dead for 30 years, but they keep making movies and TV shows based on his work…Blade Runner, Total Recall, Minority Report, The Man in the High Castle. I need that kind of luck to help pay for my daughter’s college education.

Recently, my daughter and I were at a crowded beach to go boogie boarding. We wanted to social distance, but summertime on a Southern California weekend, people everywhere! A dead dolphin had washed ashore, so we set up our chairs closer to it than I would have preferred (within 30 feet), hoping to keep the other beachgoers away from us.

It worked. The dolphin was rust-colored and bloated from decay, with puss oozing out of its breathing hole. Definitely cringe-worthy, but odorless, thankfully. My daughter was fascinated; I was disgusted, but the boogie boarding was great.

I like to let a story seed in my mind until it grows large enough that I need to transplant it onto paper. At that point, an outline comes in handy, just to have a deeper sense about the story I want to tell and where I want it to go. But once the writing starts, the story often changes course and often starts to write itself. My hope is that I have done enough thinking on the front end so that even if the story shifts, I can lead it back to the original concept or make sure it turns out better. If I have managed my process well, revising and editing should be limited to 3-4 drafts before I hand off to an editor, because after that it’s difficult for me to keep reviewing my manuscript without losing perspective.

My daughter actually made a sign with markers and construction paper and put it on the wall above my head, so all of my colleagues I talk to during Zoom calls can appreciate the motto, too. 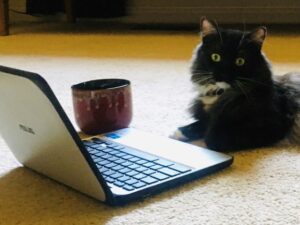 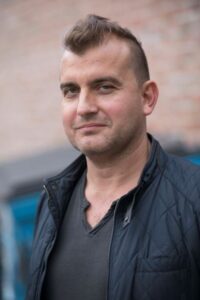 Ryan Hyatt was born in Tucson in 1976. He was raised in Phoenix, Los Angeles, Chicago and Copenhagen before returning to his hometown and graduating from the University of Arizona in 1999 with a bachelor’s degree in history, psychology and creative writing. Hyatt spent much of his twenties working as a reporter and columnist for newspapers such as the Apache Junction Independent and Santa Monica Daily Press. In addition to the Terrafide series, he is author of the modern western, The Death of Rock ‘n’ Roll, and editor of the satirical sci-fi news site, The La-La Lander, as well as Not Your Father’s Bedtime Stories, children’s tales he creates with his daughter. He holds a master’s degree in education from California State University Northridge and develops and manages literacy intervention programs for Los Angeles schools. For updates on the state of the future, visit thelalalander.com.

3 lucky winners will receive a finished copy of THE PSYCHIC’S MEMOIRS, US Only.

3 lucky winners will receive an eBook of THE PSYCHIC’S MEMOIRS, International.