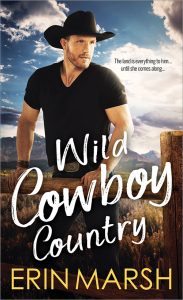 Who has more right to the land?

Park ranger Lacey Montgomery and rancher Clay Stevens are on opposite sides of a thorny issue. Lacey has spent her career reintroducing wolves to Rocky Ridge National Park and now oversees the welfare of the pack. Clay has struggled for years to make a success of the historic ranch he inherited and is tired of losing his calves to predators.

When Clay’s teenage nephew and his friends carelessly endanger a wild wolf and her pups, Clay and Lacey’s lives collide. They shouldn’t be so attracted to each other—she’s a hometown girl beloved in the community, while he’s still regarded as a city-slicker interloper. But Clay’s piercing blue eyes make Lacey’s pulse race, and her sweet face and kissable lips are drawing him under her spell, much as he tries to resist…

Opposites attract, but the terrain between them is awfully rough…

Two-time Golden Heart® Finalist Erin Marsh credits her childhood family road trips in her grandparents’ Grand Marquis with opening her imagination and exposing her to the wonders of the United States. The lessons she learned then still impact her writing today. She lives with her husband and daughter near Pittsburgh, Pennsylvania.

Wiping his hands on a towel, Clay turned to her, his smile both hesitant and undeniably charming. “I’d offer an after-dinner walk along the river, but…”

The words hung uncompleted, neither wanting to finish the sentence and admit to the difficulties surrounding their new relationship. Instead, Lacey reached for Clay’s hand, wrapping her fingers around his. “I don’t need moonlit strolls.”

His blue eyes softened into warm pools as he lifted their intertwined hands and kissed the back of her knuckles. He released her fingers, only to gently cup her face instead. “I’d still like to take you on them though.”

A burst of joy ricocheted through Lacey, settling in her heart. She ran her fingers through his hair, and his expression turned so intense that she swore she felt a tug deep in her soul.

“Then why don’t you tell me about it.” She paused a beat before adding, “In your bedroom.”

He kissed her, his lips hot and demanding. She met his hunger with her own. His hands slipped from her face, skimming lightly down her sides until they settled at her waist. He pulled her close, and her body, already liquid from the warm heat spreading through her, molded against his. The kiss deepened. The more they indulged, the more they craved.

Clay lifted his lips from hers. They stood under the overhead kitchen light, each breathing hard. This time, it was Clay who extended his hand. Lacey immediately took it and allowed him to lead her.

“First, we’d walk through the scrub to get to the river,” Clay said, his voice low and soft. It seemed to have a current all its own, both peaceful and raging at the same time. “We’d hold hands just like this, and I’d rub my thumb over your skin.”

A shiver ran through Lacey at the gentle brush of flesh against flesh. “I like this stroll.”

He laughed, the sound a deep, rolling rumble. “So do I.”

They reached the first landing, and he paused by a window. Moonlight bathed them, and his blond hair almost appeared silver. He drew her close, his lips mere inches from hers. She could feel the puff of his breath, but he didn’t dip his head. Instead, he spoke in a husky whisper, this time using the present tense instead of what-ifs. “The water is below us now. It’s like a glowing ribbon cutting through the land.”

“I can hear it,” Lacey said. “A rushing babble breaking the night’s stillness.”

Clay’s mouth pressed against hers. A butterfly kiss. Then another. The next one landed on the corner of her mouth as he slowly worked his way across her cheek and jaw. When he reached her ear, he told her quietly, “We stop for a bit, enchanted by the beauty. But we don’t stay. We head for the grove of cottonwoods. Normally, we’d hear Steller’s jays scolding us, but they’re asleep at this hour.”

Clay stepped back and led her up the steps and down a hallway. They moved swiftly now, their breathing labored as if they’d actually taken a long hike. He paused at the end of the corridor. When he pushed open the door, Lacey said, “We startle a mountain cottontail.”

Clay chuckled. “I can just make out a faint rustle as he hops away.”

They entered his bedroom. He’d pulled the curtain nearly shut, but he’d left a big enough gap to allow bright moonlight to seep into the room. They walked inside, still hand in hand. The old wooden floorboards creaked beneath their feet.

“There’s the splash of an otter fishing in the creek,” Lacey said.

Clay stopped at the foot of the bed. “I lay out one of the old family quilts for us.”

This time, their narration wasn’t completely make-believe. A coverlet with a log-cabin design adorned the massive, mission-style bed. The room itself was bigger than most bedrooms for the time period of the house, but it had been designed after an English manor. It made for a cavernous space. Aside from a rope rug and basic furniture, Clay hadn’t done much decorating. Nothing hung on the walls, except for a single, unembellished mirror and a couple of photos of the ranch, which she assumed he’d taken. The emptiness momentarily sucked away some of Lacey’s joy, but she hid it. Clay hadn’t brought her into his private space for sympathy, and offering any would do more harm than good.

Instead, she wrapped her arms around him and kissed him long and deep. He groaned against her mouth, the sound guttural. He picked her up, and she wrapped her legs around his torso. Without breaking their embrace, he carried her over to the bed. They tumbled onto the mattress, their lips locked, their limbs tangled. A desperate, urgent edge now drove their lovemaking. Lacey’s blood thundered through her like a galloping mustang, wild and unfettered. She reached for Clay’s Western shirt, her fingers fumbling at the buttons. His mouth moved from hers, trailing across her chin and then down her throat. When he hit a sensitive spot, she gasped. He paused, applying a gentle suction before his tongue darted out. Intense pleasure shot through her. She arched, yanking on the button still between her fingers. It ripped loose, and she felt his lips curve against her flesh.

“Why, Miss Montgomery, are you tearing off my clothes?”

“I have more shirts. Feel free to continue. I want your hands on me. All of me.”

A landslide of need collided in her. Without taking time to think, Lacey bunched the fabric in both hands and pulled sharply. The buttons flew off with satisfying pops.

Clay lifted his head to stare down at her. The moonlight glinted off the golden strands in his arched brow. “You are surprisingly good at that.”

She smiled and ran her fingers over his defined pecs. “Beginner’s luck and plenty of motivation. I’ve been wanting to touch you for weeks.”

Clay responded with a long, hard kiss. “You’re making it very hard to take it slow.”

“Sorry,” she said with a surprising giggle. Even as a teenager, she’d rarely tittered. If she was going to laugh, it was going to be a full one. But now. In this moment. The lighthearted sound seemed right, a delightful echo of the buoyancy Clay made her feel.

His fingers grazed the bottom of her T-shirt. “May I?”

She nodded. “I’ve been fantasizing about that too.”

He chuckled, the sound a little raw. “Not nearly as much as I have.”