Praise for THE SECOND STAR

“Like its cast of returned starfarers, this rich and continually surprising novel is many things at once: a religiously-inflected first contact story; an engaging psychological mystery; a glimpse of the future through the eyes of the past; and a moving tale about the difficulties of homecoming. I highly recommend it. ” —Matt Ruff, author of Set This House in order The Parada had been lost for almost two hundred years before they recovered the ship, drifting in stygian interstellar darkness, and brought her home again.

But that was not the miracle.

The miracle was that the crew was still alive.

That was also the problem.

Six crew members went out on the Parada, Earth’s first starship. All contact was lost, and the ship vanished for almost two centuries. When the Parada’s successor found the drifting ship and somehow managed to bring it home, the six crew members were not only still alive but barely older, due to the time dilation effects of near-FTL travel. Their return was a miracle – but it could not be revealed to the waiting world. The problem was, six individuals went out to the stars. More than seventy fractured personalities came back.

Psychologist Stella Froud and Jesuit Father Philip Carter were recruited as part of the team assembled to investigate the mystery, and to try and help the Parada’s crew understand their condition and possibly reverse it. What they discovered was a deepening mystery, and very soon they found themselves forced to take sides in a conflict that nobody could have possibly predicted. Their world would never be the same again.

You can purchaseThe Second Star at the following Retailers: 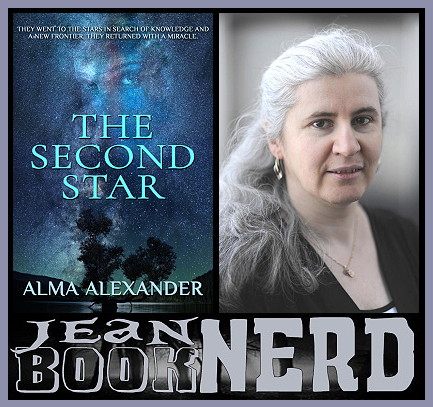 Alma Alexander is an author whose books include the internationally acclaimed historical fantasy The Secrets of Jin-shei published in 13 language, and its follow-up, Embers of Heaven, set in a fantasy China.

VOYA suggested that her Worldweavers series (Gift of the Unmage, Spellspam, Cybermage, Dawn of Magic) might be just the thing “for readers suffering Harry Potter withdrawal.”

Another series, The Were Chronicles (Random, Wolf, Shifter), which dramatically changes the Were world, is about to be republished,

Other fantasies include her haunting and newly republished Midnight at Spanish Gardens, as well as Changer of Days, Wings of Fire, Empress, and a humorous science fiction novel, AbductiCon. She has edited two anthologies, River and Children of a Different Sky.

More on all her books – and links for buying them – can be found under the pull-down menu BOOKS at the top of the page.

Alma Alexander was born on the banks of the Danube in a country that no longer exists, grew up in Africa, and is married to an American she met online. She lives with him and two cats in the cedar woods of the U,S. Pacific Northwest.

I have a very tiny one because there was only SO much space between the edge of my bed and the wall – and the thing that stands there was literally custom made to fit in that space, tall and narrow, with just a tiny square on top. What I keep in that space, in random order: my clock (I can’t live without that – when the power goes out and the clock goes dark I feel like a part of my mind has shut down…); a tiny red enamel rabbit (I am a Water Rabbit in Chinese Zodiac, and this is a nod to that); a little box with Colombian Worry Dolls (in theory, you can pull out one of the little pipe-cleaner mannikins inside the box, stare at it while thinking about your problem, and return it to the box just before you go to bed and it should spend the night working on a solution for you. It hasn’t really worked so far but it’s a fun game to play sometimes); a small LED flashlight (occasionally necessary when I hear one of the cats horking somewhere nearby and I really DON’T want to step into it unaware…); my dream journal (a notebook where I write down the more bizarre of my dreams, what I can remember of them, when I wake in the morning – some of these have turned into published stories…); and a tiny pewter frame holding a passport-photo-sized black and white picture of my grandmother, greatly beloved, lost these thirty years and more but whose spirit I always carry within me. Oh, and a book. Whatever book I happen to be reading just before I go to sleep every night.

I have met many of the authors whom I’ve fan-girled – I was part of a writing workshop chaired by Roger Zelazny; I shared meals with Ursula Le Guin and Guy Gavriel Kay; I’ve been a cocktail parties with Terry Pratchett, Octavia Butler,  and Vonda McIntyre; I’ve shared signings with Neil Gaiman, Robin Hobb, Matt Ruff, Spider Robinson; I’ve moderated panels at science fiction conventions where the other panelists have included Robert Silverberg,, Larry Niven, Robert J. Sawyer, David Brin, Greg Bear. Once you become a part of the tribe, you get the perks – and the perks are getting to meet all the people whom you only used to read books by, before. But a friend of mine actually had the experience of meeting J R R Tolkien… and I can tell you I would have been speechless, if I had done that. I would have just stood there with my mouth open fighting the urge to curtsey to him.

Willful ignorance. Don’t get me wrong, genuine unawareness of something (coupled with a sincere response of being willing to be educated about it when that unawareness is exposed) is not the same thing at all. I am talking about people who are CONVINCED that they are right when they are demonstrably wrong, and won’t accept correction on pain of death. Not only does it make me cringe, it makes me angry. I am fully aware that I don’t – I simply can’t – know everything about everything – but what I do know, I know. And if there’s someone out there bloviating on the matter and WALLOWING in the fact that they are demonstrably and provably wrong… the hackles go straight up.

That, and anyone being unkind or cruel to an animal. It makes me cringe and then it turns me into a berserker. I am usually quite a mild mannered and introverted individual who avoids confrontation – but show me someone mistreating an animal and I’m going to scream at them. And possibly worse. I once saw somebody attempting to abandon a woeful horse, whose ribs stood out from its pathetic skin to the point that you could have played them like an instrument and who simply stood there with his head hanging down in dejected despair while waiting to die, and I made him stand there while I called animal welfare on him. I don’t… do that lightly.

I am the ultimate “pantser” – when I plant a story seed into a fertile ground I have no idea if it will grow into a cabbage or a redwood. Not until it starts sprouting, and even then, I can just watch. And take dictation. I write mostly to find out how MY OWN stories end. Because I quite often literally don’t know. The only time I’ve ever been known to do “outlines” is if I need a timeline just to keep straight how old a given character was at any given time – but that’s about it. I have been asked to do “sales” synopses, on the strength of which an unwritten book might be sold to a publisher – and honestly it’s hilarious because the book that I sold on that basis, the finished book, literally bears no resemblance to the synopsis that sold it other than they both begin at roughly the same place. Don’t ask me what happens next – I’ll have to talk to my characters and get back to you. You’ll read it in the next chapter – just like I found it out…

I am told I start sentences with “And” far too often. Yes, I know. Grammar purists will tell you that you shouldn’t start a sentence with a preposition. But (see what I did there?) sometimes it just works, doesn’t it?

I’ve had words singled out  for overuse before – for example, once I went back over a paragraph and discovered that I was quite lost in the “moment” because I used the word “moment” in just about every sentence, practically twice in a sentence if I could get away with it. And a friend who reads early drafts of my stuff once told me that I am allowed to use the word “preternatural” only once in any one given work – and even then only if I absolutely have to.

A word I love to use, and don’t get to use nearly often enough to suit me, is petrichor. 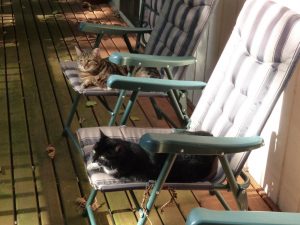 Those two royal felines insist on having their own chairs on our deck. That’s Blackjack (the tabby) and Laptop (the tux)