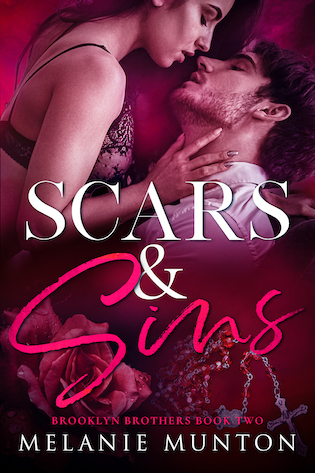 We are the Rossetti’s.
The exiled “sixth” family of the New York mafia. We’re the good guys.
People don’t fear us…much. They respect us.
The five of us? We’re the Brooklyn Brothers.
And we protect what’s ours.

You know when you have a little sister and she has that one friend that always follows you around like a puppy? For me, that was Roxanna “Roxy” D’Angelo. That was years ago, back when our fathers didn’t hate each other. Then they became enemies and she went off to boarding school in Connecticut.

Now, she’s back…and looking nothing like the shy girl I remember.

Cavorting with anyone from the five families is strictly forbidden to someone like me. So, I can’t figure out why I keep finding myself in situations with Roxy that could bring the force of the entire mafia syndicate down on our heads. Even if those situations are the wildest, most intoxicating experiences of my life.

But with the Sicilians in town and out for blood, times have never been more dangerous. If they find out about our relationship, they won’t hesitate to remove both of us from the equation so they can restore order.

We’re not Romeo and Juliet. They both died. And I refuse to let anything happen to Roxy. I have to protect her. From my family. From hers.

I hope she won’t hate me for what I have to do.
Because it might just kill her before any bullet can.

His eyes softened. “She’s good, other than being annoyed all the time. She’ll be a senior at NYU. Pre-law and she hates it.”

She and I had been best friends for our entire childhoods. Inseparable up until one disastrous night five years ago. That was why I’d been around Ace so much over the years. Any time she and I had hung out, I’d always begged to come over to her place. My house had never held much appeal because after all, Ace wasn’t in it. And knowing Gia as well as I did—or used to—she would have definitely hated going pre-law.

God, I missed her.

His expression turned to that of an adoring older brother. “Of course.”

And that was why my crush had never gone further than a crush.

I was just another little sister to him.

Gia and I were the same age, three years younger than Ace. He had basically lumped me into the same category as her years ago: annoying younger sister. Trailing after him, hanging onto his every word, I had made a giant fool of myself. Even worse, I knew his four older brothers had teased him to no end about it. If Ace had ever been protective of me, it was always in an angry, brotherly way, not in a jealous, possessive type of way. Which was what I’d always secretly longed for.

Because I’d never—not once—thought of him as my older brother.

Not for one second.

“Maybe you guys could hang out sometime,” he added. “She’d love to see you.”

There had been a gaping hole there ever since I lost her years ago to the rising tension between our families. Our fathers had once been good friends, then they had a falling out, and any connection between the D’Angelos and the Rossettis had been obliterated in an instant.

“I think you and I both know that’s not possible.” My voice was resigned. “Nothing has changed.”

To my astonishment, his eyes flared as they slowly raked down my body.

Was he really looking at me like that? Like he did in my pathetic, hopeless dreams? But where was it coming from?

“Oh, I don’t know,” he rasped, his gaze once again landing on my mouth. “I’d say some things have definitely changed.”

His words knocked the air right out of my lungs.

The level of bafflement on my face was surely making me look like an idiot, but nothing could have been done about it.

He took a meaningful step toward me. “Have you been a bad girl, Roxy?”

I’d been staring at his mouth, the way the corner of it twitched with a hint of a grin, but my eyes flew up to his at those words.

Because they dripped with innuendo.

Since when did Ace speak to me with innuendo? Did he suddenly forget who he was talking to?

Embarrassingly, I felt my cheeks heat. He probably thought I was an inexperienced, naïve child at seeing how easily I could still blush.

But I was only one of those things, thank you very much.

My voice unintentionally came out as a whisper. “Excuse me?”

His eyes briefly flitted to the confessional booth. Then that grin came back. “What kind of sins does a girl like you need to confess?”

There was one thing about Ace that had always stood out for me above so many others.

That inquisitive expression of his I mentioned earlier was one that could swiftly turn very intense. Particularly when he was looking at a girl he was interested in. His eyes would go molten, his jaw would harden, his lips would tighten, and when his chin dipped almost imperceptibly lower, he really meant business. And by business, I meant he was turned on. It was like his signature look that he always gave pretty girls.

For years, I’d desperately hoped Ace would one day look at me like that.

That I would make his jaw clench, make his mouth firm. That I could cause the kind of visceral reaction in him that made his hands fist with the uncontrollable urge to grab me and haul me to him. I wanted his need to kiss me to light a fire in him so hot he’d do anything to relieve the burn.

I’d seen him look at so many other girls just like that, and it had broken my heart each and every time. I’d fallen asleep countless nights, praying that I would eventually be the recipient of his heated inspection.

And for the first time in my life…Ace was looking at me.

Traveler. Reader. Beach-goer. St. Louis Cardinals fan. Pasta-obsessed. North Carolina resident. Sarcastic. Bit of a nerd.
Author of the Cruz Brothers, Possession and Politics, and Timid Souls series, Melanie loves all things romance, comedies and suspense in particular because it’s boring to only stick to one sub-genre! From light-hearted comedies to sexy thrillers, she likes to mix it up, but loves her some strong alpha males and sassy heroines.
Go visit Melanie’s website and sign up for her newsletter to stay updated on release dates, teasers, and other details for all of her projects!