I am thrilled to be hosting a spot on the STEEL ROSE by Kathryn Ann Kingsley Blog Tour hosted by Rockstar Book Tours. Check out my post and make sure to enter the giveaway! 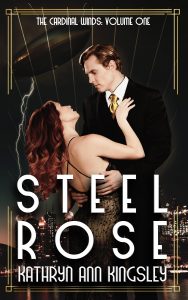 READ FOR FREE ON KU!

The commander of the East Wind Dominion is a terrifying man. He leads an army of automatons. He can control lightning itself. And now, Rose Calder is his prisoner of war.

All Rose has ever known is fighting. When the invading forces of the East Wind Dominion take away her friends, her family, and her home, she takes to the skies to battle for her freedom. For hope.

When the war comes to a sudden end at the hands of commander Viktor Lang, she is certain that she is about to die. When he discovers her impossible secret, she becomes a mystery that he is desperate to solve and that may be worse.

The war may be over, but now she stands to lose much, much more.

Authors Note: “Steel Rose” is what I consider to be a villain romance. My male characters are often not very kind or gentle. This story has a HEA, but it may be a tough ride getting there. This story has mature themes and content.

The end of a cane on the tarmac heralded his approach. He had climbed out of the commander’s black vehicle. He was dressed in a perfect, immaculate military uniform. The insignia on his collar wasn’t a rank—not like the others.

It took Rose forever to pull her gaze away from the pin on his lapel and up to his face. His eyes were the color of topaz, yellow and flecked in what looked like gold. It was unnerving at best. At worst, it was terrifying.

As was the expression he wore. Or lack thereof. He was handsome—he would turn heads anywhere he went, if it weren’t for the freezing coldness there. It made him so utterly unwelcoming that it turned his beautiful features into something frightening. The exacting, demanding, regal expression he wore looked as though he saw all the world around him and decided it was something small.

He had neatly cropped blond hair. Everything about him, down to his shining black boots and silver-topped black cane—was immaculate. Every detail was perfection.

The only thing awry with him was the slight limp he had. He leaned on his cane to smooth out his steps. It didn’t seem like it slowed him down, but as it was the only thing about him that wasn’t otherwise perfectly tailored and in its rightful place, it stood out to her immediately.

It didn’t stop the fact that she felt so very tiny in front of him.

And now, she was very, very dead. 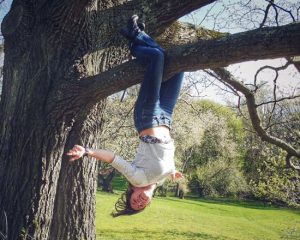 Kat has always been a storyteller.

With ten years in script-writing for performances on both the stage and for tourism, she has always been writing in one form or another. When she isn’t penning down fiction, she works as Creative Director for a company that designs and builds large-scale interactive adventure games. There, she is the lead concept designer, handling everything from game and set design, to audio and lighting, to illustration and script writing. Also on her list of skills are artistic direction, scenic painting and props, special effects, and electronics. A graduate of Boston University with a BFA in Theatre Design, she has a passion for unique, creative, and unconventional experiences. In her spare time, she builds animatronics and takes trapeze classes. 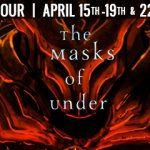 #Giveaway Excerpt THE MASKS OF UNDER Series: KING