Praise for IT TAKES DEATH TO REACH A STAR“…merging the best of apocalyptic fiction and sci-fi … compelling.” —Library Journal

“[I] cannot fathom how Stu Jones and Gareth Worthington created this masterpiece.” – Reader’s Favorite.
“This was one of the most original books I have read in a long time. I was completely transfixed from beginning to end.- This book gets a perfect score (which is rare!) – editing, format, layout, etc., all well done” —Feathered Quill Award Judges 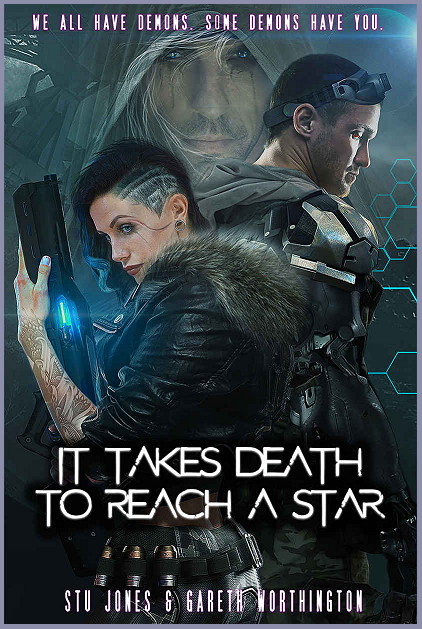 WE ALL HAVE DEMONS. SOME DEMONS HAVE YOU.

The world you know is dead. We did this to ourselves.

The epidemic struck at the end of the Third World War. Fighting over oil, power, and religion, governments ignored the rise of an antibacterial-resistant plague. In just five years, the Earth was annihilated. Only one city survived—Etyom—a frozen hellhole in northern Siberia, engulfed in endless conflict.

Two groups emerged from the ashes of the old world. Within the walled city of Lower Etyom dwell the Robusts—descendants of the poor who were immune to the New Black Death. Above them, in a metropolis of pristine platforms called lillipads, live the Graciles—the progeny of the superrich, bio-engineered to resist the plague.

Mila Solokoff is a Robust who trades information in a world where knowing too much can get you killed. Caught in a deal gone bad, she’s forced to take a high-risk job for a clandestine organization hell-bent on revolution.

Demitri Stasevich is a Gracile with a dark secret—a sickness that, if discovered, will get him Ax’d. His only relief is an illegal narcotic produced by the Robusts, and his only means of obtaining it is a journey to the arctic hell far below New Etyom.

Thrust together in the midst of a sinister plot that threatens all life above and below the cloud line, Mila and Demitri must master their demons and make a choice—one that will either salvage what’s left of the human race or doom it to extinction …

You can purchase It Takes Death to Reach a Star at the following Retailers: 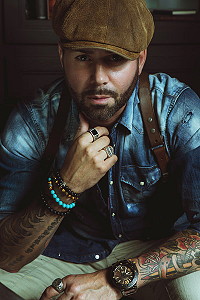 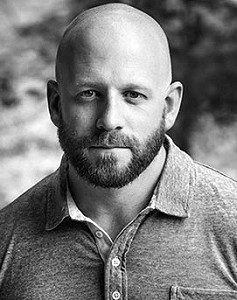 Photo Content from both Stu Jones and Gareth Worthington.

A veteran law enforcement officer, Stu Jones has worked as a beat cop, an investigator, an instructor of firearms and police defensive tactics and as a member and team leader of a multi-jurisdictional SWAT team. He is trained and qualified as a law enforcement SWAT sniper, as well as in hostage rescue and high-risk entry tactics. Most recently, Stu served for three years with a U.S. Marshal’s Regional Fugitive Task Force – hunting the worst of the worst.

Stu’s passion for writing developed during his years in college while obtaining his bachelor’s degree in history. In the years that followed, Stu published three faith-based post-apocalyptic novels – the Action of Purpose trilogy.

Stu’s most recent published work is the award-winning futuristic thriller, It Takes Death To Reach A Star, written with co-author Gareth Worthington(Children of the Fifth Sun). It was published by Vesuvian books in May of 2018. He is currently working with Gareth Worthington on the follow-up to “Star” as well as other joint and solo projects.

Known for his character-driven stories and blistering action sequences, Stu strives to create thought-provoking reading experiences that challenge the status quo. When he’s not chasing bad guys or writing epic stories, he can be found planning his next adventure to some remote or exotic place.


Gareth Worthington is a trained marine biologist and also holds a doctorate in comparative endocrinology. Currently, Gareth works full time for the Pharmaceutical industry helping to educate the World’s doctors on new cancer therapies. In his spare time Gareth has a number of passions, including: martial arts – he trained in Muay Thai at the prestigious EVOLVE MMA gym in Singapore and currently trains in MMA at Phoenix Sportkampf, Switzerland; playing acoustic guitar; studying ancient history; drawing; and most of all writing fiction. 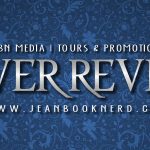 $25 #Giveaway CHILDREN OF THE FIFTH SUN by Gareth 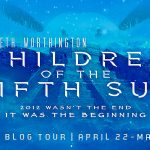