Christina Hovland’s MILE HIGH MATCHED Series is out on Audible now! Check out today’s release day blitz and be sure to grab your copy today! About Going Down on One Knee:

“An utterly charming opposites-attract-story. Hovland perfectly balances simmering sexual tension with a surprising amount of emotion, and the stomach-flip-causing ending is the perfect example of why I read and love romance.” – New York Times Bestselling Author, Lauren Layne

That’s a lie. Sure, she’s got the lucrative job. She’s got the posh apartment. But her sister nabbed Velma’s Mr. Right. There has to be a man out there for Velma. Hopefully, one who’s hunky, wears pressed suits, and has a diversified financial portfolio. He’ll be exactly like, well… her sister’s new fiancé.

Badass biker Brek Montgomery blazes a trail across the country, managing Dimefront, one of the biggest rock bands of his generation. With the band on hiatus, Brek rolls into Denver to pay a quick visit to his family and friends. But when Brek’s sister suddenly gets put on bed rest, she convinces Brek to take over her wedding planning business for the duration of her pregnancy.

Staying in Denver and dealing with bridezillas was not what Brek had in mind when he passed through town, but there is one particular maid-of-honor who might make his stay worthwhile.

Velma finds herself strangely attracted to the man planning her sister’s wedding. Problem is, he ticks none of the boxes on her well-crafted list. Brek is rough around the edges, he cusses, and doesn’t even have a 401(k). But trying something crazy might get her out of the rut of her dating life–so long as she lays down boundaries up front and sticks to her plan…

Going Down on One Knee is book one of the Mile High Matched series. If you love a hunky, tattooed wedding planner this book is for you. Buy nowfor a fun, opposites attract romance!

Velma adjusted the groceries in her arms and kicked the door to her apartment closed. She was rolling with life and doing her best to be flexible. Starting with the roommate situation. No nagging. No telling Brek what to do.

With him across the hall, she barely slept. He’d brought his guitar with him, and sometimes when he’d play late at night, she’d lay awake listening. Even when she managed to drift off, he permeated her subconscious. Things weren’t better when she woke up. He walked into the room, and she practically wanted to inventory his ink with the tip of her finger. Memorizing each swoop and line of the tattoos could be her new favorite pastime.

There was one good thing about the situation—with her hormones hyper-focused on Brek, inappropriate Dean thoughts were at a minimum. Those thoughts mostly focused on the broken hopes of her five-year plan, which disappeared the moment Brek walked into the room.

“You have got to be kidding me.” She glowered at the dirty plates in her sink and dropped a canvas sack of groceries on the kitchen counter. The dishwasher was right there, for goodness’ sake. She pointed at it for good measure—even if she was the only one in the room.

Earlier she had tripped over Brek’s muddy boots in the middle of the floor, and his jacket seemed to have a perpetual aversion to being hung.

Claire assured her, Brek would come around to her way of doing things.

Patience. She would need a truckload of the stuff because, no matter what, getting used to each other took time. Brek deserved some leeway while he got situated.

“It’s only been a few days,” she said in a failed attempt to convince herself.

She yanked open the stainless-steel door to the dishwasher, rinsed and loaded three plates, four glasses, an abnormal number of forks for one man, and a shaker bottle with a little wire ball inside. None of that had been in the sink that morning when she’d left the apartment.

Brek had somehow dirtied enough cutlery to fill the entire basket in her dishwasher.

A splash of whatever the heck the bottle contained dropped on her palm. The thick liquid smelled like vanilla.

“Crud,” she mumbled, rinsing her hand under cold water.

She wiped her damp hands on a towel. Something squished between her fingers. Peanut butter.

Okay, they had to chat about this and lay down some ground rules.

“Brek?” she called, rinsing off the mess.

“Hey, V,” he hollered from his bedroom.

Her breath stuck against her ribs, and her cheeks heated. The feeling had, unfortunately, become normal whenever he was around. More frequently since he’d started using the nickname.

“What the hell is Bohemian chic?” he asked. “Bride Number Three said she wants it, but fuck if I know what that means.”

Cue the cussing, all the cussing. The man invented more ways to drop an f-bomb than anyone she’d ever met.

“I have no idea.” She dried her hands and pushed a stray hair from her forehead. “Can we talk?”

“Hang on, I’ve got to pin this.” He tapped the screen of his phone.

“Bride Number One said she pinned something about wineglasses with Skittles in ’em.” He dropped the phone next to her purse and made exaggerated air quotes. “They’re ‘cute.’ As are champagne-flavored gummy bears, apparently.”

“Wait.” Velma couldn’t hold in the laugh. “You’re on Pinterest?”

“Jase already gave me a load of shit about it, right before he followed all my boards,” he grumbled. “This isn’t my normal gig, but Brides Number One and Two both said I needed to follow them to keep up with their themes.”

“Brides Number One and Two?” Velma squinted at him.

He lifted a corded shoulder. “Numbers are easier than names.”

“You sure know how to make girls feel special.” She forced herself to glance away from the way his shirt highlighted his muscles to focus on his eyes.

“You want me to make you feel special?” The intense way he stared at her gave every indication he was more than happy to follow through if she said yes. Oh, she wanted to say yes. Her subconscious screamed for her to say yes. About Blow Me Away:

It’s all fun and games until somebody falls in love…

Jase Dvornakov has always loved women, 80’s hair band music, and things that go boom. He used to disarm bombs in the Navy, but he’s back in Denver after a mission overseas went sideways and destroyed his future, including his marriage. Now he arranges flowers in his family’s floral business because flowers don’t explode.

Cookie-baker extraordinaire, Heather Reese, has had one too many rounds of heartache, so she’s sworn off men and prefers to spend her evenings binge-watching game shows. Plus her no-men rule gives her time to focus on her dream come true–Heather’s Cookie Co.–her very own bake shop with an underground following for naughty shaped treats. She refuses to be interested in the hot-shot florist across the street. He is trouble with a capital T. Sexy trouble, but still, a hook-up with Jase is a hard nope.

Desperate to avoid his family’s incessant matchmaking, a fake breakup with the beautiful Heather is just what the florist ordered. If his family believes Heather decimated his heart, they’ll leave him alone. Heather isn’t so keen on the idea, but Jase is determined to make it worth her while. When a pretend breakup becomes the real romance neither was expecting, together they’ll have to decide if it’s finally time to light the fuse on love…

Blow Me Away is the second book in the Mile High Matched Series. Each book stands alone and can be read in any order. If you love friends to lovers with a dash of steam, this is the book for you! Buy Blow Me Away for a laugh out loud romantic comedy! About Take it Off the Menu:

Saying “I Do” has never been such a mess.

Marlee Medford just got dumped. Yes, things have become ho-hum in her longtime relationship, but she was two days away from walking down the aisle with the man she thought was her forever when he called it off. Convincing herself that they’d be able to reignite their spark once the wedding craziness settled? That was easy. Suddenly finding herself without a fiancé? Not so much. Marlee needs to regain control of her life, and a weekend away with her friends is a solid first step.

One of Denver’s best up-and-coming chefs, perpetual bachelor Eli Howard, isn’t into serious relationships—especially the kind that ends in marriage. As if to prove his point that they aren’t worth the trouble, the wedding he was supposed to be catering just fell apart. Feeling oddly protective of the jilted bride—his little sister’s best friend—his weekend plans now involve a trip to Sin City with her group of friends. But it looks like he had a bit too much fun in Vegas when he wakes up married…wedding night included.

Marlee’s attempts at getting her life back together are failing miserably. Her ex-fiancé is taking the house, her chihuahua is intent on a love affair with Eli’s sneakers, and she’s now accidentally hitched to the guy who can’t even say the word marriage. With their quickie annulment denied, Eli and Marlee just have to hang tight until the divorce goes through. It’s just a little divorce amongst friends, what’s the worst that could happen?

Take It Off the Menu is book three of the Mile High Matched series, but stands alone and can be read in any order. If you love a hunky caterer and an accidental marriage then this book is for you! Buy now for a fun, friends-to-lovers romance! Christina Hovland lives her own version of a fairy tale—an artisan chocolatier by day and romance writer by night. Born in Colorado, Christina received a degree in journalism from Colorado State University. Before opening her chocolate company, Christina’s career spanned from the television newsroom to managing an award-winning public relations firm. She’s a recovering overachiever and perfectionist with a love of cupcakes and dinner she doesn’t have to cook herself. A 2017 Golden Heart® finalist, she lives in Colorado with her first-boyfriend-turned-husband, four children, and the sweetest dog around. 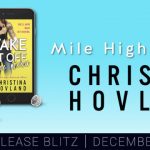