Today we have the blog tour for unVerified by Kristin Giese! Check it out and be sure to grab your copy today! Matthew Milles-Lade, a rich kid whose trust fund is suddenly in question, and Margo Valentine Melon, a writer whose career fizzled before it sparked, are two twenty-something strangers stuck living at home, trying to figure out their lives. When they each come across a real estate listing for a palatial (and significantly underpriced) guest house in one of LA’s toniest neighborhoods, their lives get turned upside down.

What happens next has them racing to catch the truth before it catches them.

Unverified has all the magic and making of the rom coms you love, set in the world of social media stardom and online fame, with just enough real world stakes to make it a page turner you won’t be able to put down.

“Run it again,” Matt said, hiding his annoyance behind a forced smile. “Please,” he tacked on to appear congenial.

“I did. Twice. It says it’s been declined, Bud. If you want this beef jerky and Pedialyte, you’ll have to pay for it another way,” the cashier observed with obvious judgment.

Matt smiled, grabbed his card, and walked out of the shop dialing Rob Rolle as he did. He got his voicemail. “Rob on a Rolle,” Matt boomed over the line, using the nickname he’d given his father’s wunderkind of a CFO when Matt was 21 and Rob was 30. Rob on a Rolle hated that nickname, which is exactly why Matt kept calling him that. Matt hated Rob. “It’s me, Matt. I was just trying to buy some,” he paused grappling for a word other than “garbage at the 7-Eleven” and landed instead on, “groceries and my card got declined. Give me a quick call.”

He hung up and told himself it was a fluke. The pit in his stomach said it was more than that.  The card in question was his debit card linked to his savings account, which drew directly from his trust fund. Each month money appeared there, and Matt vacationed, partied, and surfed his way through it. The thought that his father might finally have made good on a longstanding threat to freeze it made him dizzy, or was that hunger? He was starving, and still a little drunk, he thought. He reached in his pockets searching for cash. He didn’t even have enough to go back in and buy just that Slim Jim. I’m screwed, he decided.

His phone rang. It wasn’t Rob. It was Leandra Jennings, the head of business services for his father’s company, Milles-Lade Enterprises. He thought about not answering, but knew it was Rob’s way of saying he wasn’t going to call back. Screw you too, Rob, Matt thought vehemently.

“Hey Lee, what’s new?” he said, forcing optimism into his voice and putting on all his charms, which wasn’t hard. Matt Milles-Lade was all charm.

“Rob just rang saying he wishes he had a moment to chat, but”—Matt and Rob both knew that was a lie—“he and your father are on their way to Zurich. He wanted me to pass along some updates. Hate to be the bearer of bad news, Matthew, but they’ve frozen your trust…”

Rob said your father plans to reinstate your funds once you accomplish a few things on a checklist he’s emailed you….”

Matt pulled the phone away from his ear to look at the screen. Sure enough, his inbox blinked back at him. He opened the email.

“Son, I’ve frozen your trust. I’m happy to give you your access back, but first you’ll have to do the following, STOP BEING SUCH A FUCK-UP. Get a job. Drink less. Care more. Basically, be the sort of human that doesn’t have to be extorted by their own father to get their act together. Dad.”

He waited to read more until he pulled into the small corner parking lot of the café that resided halfway down the hill from their Bel-Air home, Coyote Café. It was one of the rare remaining canyon coffee shops. On any given weekend, all manner of celebrities could be found there, bedhead and all. There was no place for the paparazzi to stand and snap their picture on the way in or out. It was a hidden gem that only locals knew about. Their hours were strange, but their sandwiches were amazing, and yet Matt couldn’t remember the last time he’d been there. It was a hole in the wall that lacked any real décor but made up for it by the way they took care of their customers. As Matt idled in the lot, he read the text.

You’re out of chances, Son. Find a new place to live.

Get Your Copy Today! Kristin Giese is a talent manager, brand developer, and executive producer who began her career building the entirety of the Nate Berkus brand, amongst other talent as well as partnering with the likes of The Oprah Winfrey Show, OWN, Sony, Target, TLC, NBC, P&G, GMC, and so many more.

Born and raised in Ohio and a proud Shelby Whippet, Kristin’s love for estate jewelry is only outmatched by her commitment to vintage kimonos and her family. Unverified is her 1st novel. Follow her on Instagram @allmoxie. 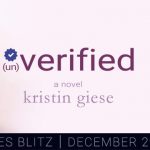