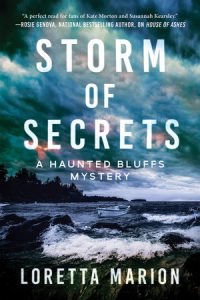 A deadly storm, a missing three-year-old child, a grisly murder, and the eerie presence of the spirits of the dead set the stage for the second mesmerizing installment of Loretta Marion’s paranormal suspense series.

A powerful storm descends upon Cape Cod’s Whale Rock at the peak of tourist season–and the weekend Cassandra Mitchell’s and Daniel Benjamin’s wedding is set to take place at The Bluffs, the magnificent Victorian mansion Cassie inherited from her family. In the wake of the storm’s destruction, three-year-old Lucas Kleister goes missing–and the body of small-time drug dealer Lee Chambers is found in a restaurant dumpster. Now, the WRPD are faced with a murder to solve, a missing child to find, and the aftermath of one of the worst storms in recent memory.

While aiding with the clean-up and helping the displaced, Cassie has been receiving cryptic messages from the spirits of her great-grandparents, Percy and Celeste Mitchell, the original residents of The Bluffs. At first, the messages are benign, but soon, they begin to point to something more sinister. As Cassie works to decipher their meaning, the specter of a mysterious local legend surfaces. The tale of Barnacle Boy–and what happened to him during another destructive storm decades earlier–will weave through the desperate search to find Lucas and the identity of the killer.

“[A] gripping sequel…Marion seamlessly weaves the multiple story threads together. Fans of tales of regional intrigue will be satisfied.” —Publishers Weekly 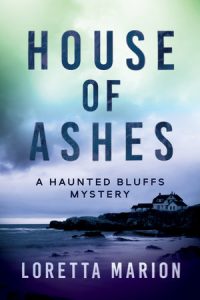 A family patriarch’s dying proclamation, an enigmatic disappearance, and a century-old curse converge in the shadows of a majestic home on Cape Cod’s craggy coast.

Thirty-seven-year-old painter Cassandra Mitchell is fourth-generation to live in the majestic Battersea Bluffs, a brooding Queen Anne home originally built by her great-grandparents, Percy and Celeste Mitchell, and still standing despite tragedies that have swept the generations. Local lore has it that there was a curse placed on the family and the house is haunted, though opinions are divided on whether it’s by malicious or benevolent spirits. Cassie believes the latter―but now she stands to lose her beloved home to mounting debt and the machinations of her dream-weaving ex-husband.

Salvation seems to arrive when a nomadic young couple wanders onto the property with the promise of companionship and much-needed help―until they vanish without a trace, leaving behind no clue to their identities. Cassie is devastated, but determined to discover what’s happened to the young couple…even as digging into their disappearance starts to uncover family secrets of her own. Despite warnings from her childhood friend, now the local Chief of Police―as well as an FBI agent who pushes the boundaries of professionalism―Cassie can’t help following the trail of clues (and eerie signals from the old house itself) to unravel the mystery. But can she do so before her family’s dark curse destroys everything in its path? 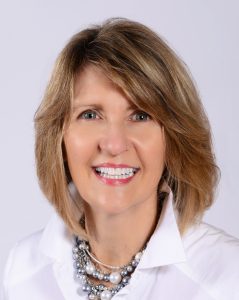 An author of fiction, Loretta’s writing bridges the genres of women’s fiction, mystery and suspense, always with hints of romance and humor, sometimes delving into the psychological and paranormal. She creates strong but flawed and struggling characters as appealing as the rich atmospheric settings in which the stories take place.

Loretta has loved reading and creating with words since she was a young girl. And that affection for the written word followed her like a shadow throughout her life as she put pen to paper crafting marketing and advertising copy, educational brochures and newsletters. But her passion for writing fiction evolved from the unlikely world of hospice. As a volunteer, she set out to establish a Legacy Story program to honor and preserve the rich heritage of the fascinating people who were soon to leave this world. The meaningful experience inspired her to create her own interesting characters and stories.

Though born and raised in the Midwest, Loretta fell in love with New England and has made it the setting for much of her writing. When not whipping out words on her laptop, she is traveling, enjoying outdoor pursuits, or is curled up with a delicious new book. Loretta lives in Rhode Island with her husband, Geoffrey, and their beloved Mr. Peabody, a sweet, devoted and amusing “Corgador” (Corgi-Labrador cross).

I was a reader long before I was a writer and always have a stack of books ready to go. If not, I start to panic a bit.

In addition to my daily journal, there are a couple of books I always keep close by:  IT’S EASIER THAN YOU THINK – The Buddhist Way to Happiness by Sylvia Boorstein (I’m not a Buddhist but have found it to be an excellent personal resource) and A ROOM OF HER OWN by Virginia Woolf.

THE BOOKSHOP OF YESTERDAYS, Amy Meyerson

There are SO many, but probably Stephen King…because he’s a genius writer.

Anything involving an animal being harmed.

I often say that the book I intend to write and the book I end up writing are vastly different. However, I do always begin with an outline because it’s important for me to have an idea where the story is headed. But it serves only as a guide, for I look at writing as a fluid creative process that should not be confined. It’s important that I remain open to opportunities that will make the story more interesting. Sometimes the characters, or the story itself, will take me on a detour. I liken it to taking a road trip. The map is there as a guide, but the experience will be so much more fun with little – or big – diversions along the way.

I’m not sure I use it often in my writing, but I love the word perseverate.

I’m attaching a photo of the late, great Mr. Peabody. We dubbed him a Corgidor as he was half Corgi half Labrador Retriever. Mr. Peabody was our canine child for fifteen years before he crossed the rainbow bridge last summer. We terribly miss his quirky personality and steadfast devotion, though he does visit me from time to time in my dreams. 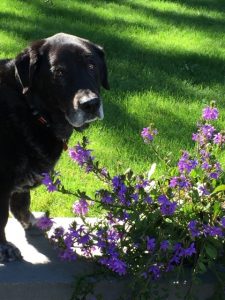 1 winner will receive a one signed first edition copy of each book in the Haunted Bluffs Mystery Series – HOUSE OF ASHES &  STORM OF SECRETS in a book bag with book marks, US Only.

1 winner will receive an ebook of THE FOOL’S TRUTH, International. 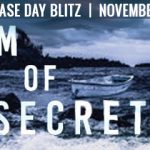