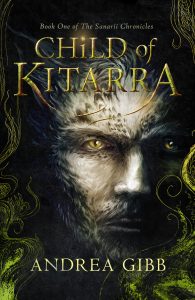 Eva, the last true sanarii, uses her forbidden magic despite the risks, not realizing she could irrevocably affect the destinies of Jullayans and Kitarrans alike. Yet caught in the machinations of the Guardians and their prophecy, can she protect those she loves from the menace of dark magic threatening not just Kitarra, but all who value goodness and light?

And her hero prince –

When Illiah learned he was not just a hero, he was also the lost prince, he came to court with one thing in mind: to arm Jullayah against any further attacks from the monstrous invaders. And in a land where magic is forbidden, he has secrets to hide. But when he finds himself falling into the secrets of a woman unlike any other, he must choose to fight for her and risk everything or lose her forever.

Eva blinked. She felt unsteady, like she had slipped into a long-forgotten tale. Her memories twisted awkwardly around what she knew about magic, about dark magic. She couldn’t remember anything that made sense or connected to the dead men before her.

The world became instantly upright when she saw Tarek slumped in a chair, his breathing ragged. She flew to his side, ripping his shirt to see the extent of his wound. His head was red with blood from the contusion he had suffered, but worse was the gash in his stomach. Blood bubbled out of his mouth indicating that he was bleeding internally. A mortal wound.

“Eva. No, you can’t,” Tarek said in a weak, wet voice, correctly reading the determined look in her eye. “Your secret -”

“Secret be damned, I will not let my friend die!” Eva said, putting her hands on his skin, the blood on her hands mixing with his. She hadn’t been able to help the king, but, by the Guardians, she was going to save Tarek. She reached for her sanarii magic, for the river within her, within every living creature, and touched it, drawing its strength, pouring it into her friend, mending his hurts, knitting his skin together, healing the bruised flesh. Tarek was a strong man. He did not scream, even when the pain of Eva’s healing magic on top of his wounds must’ve been almost unbearable.

“Eva,” Mahone’s voice was loud in her ear. Her eyesight blurred. She could no longer feel Tarek’s body beneath her hands. Her connection to her magic was weakening. The simul rami was leaving her. She could feel the precipice beside her that warned she had almost gone too far. She couldn’t focus her eyes or her mind. She sank into darkness, unable to contemplate the consequences of what she had just done. 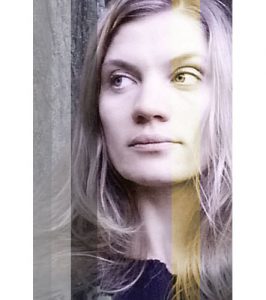 What is there to know about me?

I am a writer and an artist. Stories and characters live inside my head. Always have, probably always will. So I write them down. Sometimes I draw them.

I love trees. There is something about a tree that just breathes peace into my heart.

I grow roses. Heed the woman who grows roses, for she is not afraid of being scratched and torn.

I will always point out ravens and the moon. Just in case you missed them.

Elevenses is my favorite meal.

I live in my own bit of forest with my darling husband, our two sons, a lovely pup named Elle, a black cat named Minka, an alpaca, two big goats, and three chickens.

Literally? Thrifted vintage Christmas decorations waiting to go up on the tree. I don’t read in bed, but my next read will be The Burning White by Brent Weeks.

Neil Gaiman – who wouldn’t? and Maggie Stiefvater – she is so cool. And she has so many dogs J

In books? Love triangles… In real life? Children on chairs. Seriously, chairs hate kids because kids do not know how to sit on chairs. Chairs are always bucking the poor kids off and tripping them up.

I do not obsessively plot – I am not that organized. But once I have the main bulk down I backtrack and go over it, and plot it out where needed. I take notes and have post-its but then I end up not really using them… I wish I was more organized. I keep a lot of info in my head. I will be washing dishes or doing chores but in my mind I am going over my plot and characters.

My editor mentioned a few phrases I use too much 😉 but no, there isn’t one particular word I love more than the others. 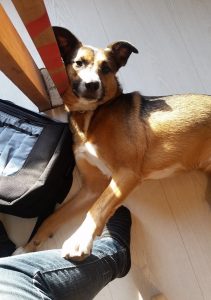 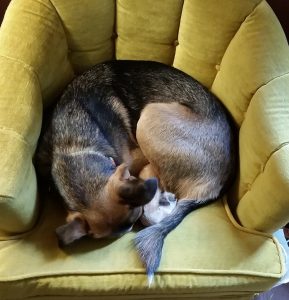 1 winner will win a signed copy of CHILD OF KITARRA & swag, US Only.