THE DEVIL AND DAYNA DALTON 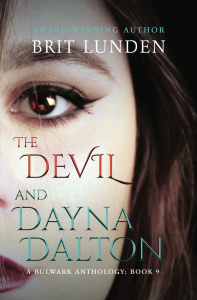 Grab all the books in the BULWARK ANTHOLOGY!

Read for free on KU!

Reporter Dayna Dalton’s reputation has been ruined since birth. The daughter of wild child, Becky Dalton, is expected to follow her mother’s footsteps; never given a chance to prove she’s different. Dana’s been in love with Clay Finnes since she was a teenager. Her unrequited love for Sheriff Finnes leaves her empty. He’s happily married and unavailable. Instead, Dayna finds herself stuck in the revolving door of bad relationships. But this is Bulwark, Georgia, a town where strange things are always happening. Dayna is doomed to this loveless life until she can find someone who will appreciate the depth of her character. Can she overcome her fears and look beyond her own perceptions to accept a greater love?

“If the Brothers Grimm and Stephen King had co-authored a novella, Bulwark would be the result. Lunden’s story is a modern, paranormal take on the classic Hansel and Gretel.

If you like to sleep with the light on after having the wits scared out of you, Bulwark isthe perfectread.”

“Bulwark is all about the plot. Lunden keeps the narrative moving at a brisk pace, introducing one catastrophe after another, only to delicately bring them all together. Every character has a purpose; every line advances the story, con-founds the reader, but offers necessary clues.”

“…jam-packed with elements that will give readers the heebie-jeebies.”

“The novel is very effective at creating atmosphere, conjur-ing a Gothic world populated by monsters and the stuff of fairy tales.”

Readers who grew up with the likes of Barker, King and Lovecraft will have a field day reading this classy, dark fan-tasy novella. And, yes, it’s that good. Lunden’s plot is first-rate and her writing is smooth, assured and polished to a high sheen. Bulwark is most highly recommended.”

“The engaging tale’s centerpiece is the teens’ romance, with a Southern setting the author masterfully captures…

The unadorned prose and concise descriptions make for a quick read all the way to the bittersweet ending…A short but undeniably charming love story.”

“I am good, but not an angel. I do sin, but I am not the devil. I am just a small girl in a big world trying to find someone to love.” ~ Marilyn Monroe

The crisp, clear sunlight was not her friend.

Dayna Dalton winced at the bright light that squeezed in through the slats of the venetian blind. She reached over and gave the cord a hard tug, sending the pint-sized bathroom into near darkness. Behind her, the shower head dripped with a steady  plop,   plop that reminded her of the exposé she did on water torture in Guantanamo Bay that never got published. It was deemed too harsh to print.

The Bulwark  Advance preferred her to write… fluffy pieces. She sneered thinking of the crap on her computer, the half-written article about the elusive Easter Bunny that awaited its final edit. She hung her head in shame, thinking of what her sorority sisters from Georgetown would feel if they knew where Dangerous Dayna Dalton had ended up. There’d be hell to pay in the form of eternal humiliation.

Dayna twisted the faucet, her freckled knuckle turning bone white from the effort. It was no use; the leak continued relentlessly, driving a hole in her throbbing head.  Oh, that last round of shots was totally not necessary.

No matter how hard she wrenched the faucet, the dribble continued. She thought she should ask her guest to fix it before he left. He was a plumber, after all. She was sick of this place. Dayna peered at her reflection in the mirror. She was sick of her life.

Skip Benson’s bearlike yawn turned into a growl from the bedroom. “Dayna.” His voice grated on her nerves.

Dayna took a steadying breath and used both hands to grip the sink as if it were holding her up. What was she thinking last night? Skip Benson? How low could she go? A shudder ran through her lithe frame. That left only Trout Parker, and she could now report she had officially and irrevocably scraped the bottom of the barrel of Bulwark, Georgia.

She rubbed her forehead where a hammer banged against the inside of her skull.

Skip wailed for her to return to the warmth of the bed. Dayna wrinkled her nose, thinking about Skip’s performance, or rather what she remembered about it. Oh yeah, too many tequila shots will make anyone desirable, even stupid Skippy Benson.

She ran her fuzzy tongue over her dry teeth, fighting the urge to gag.

Skip Benson had never been on the football team,  the basketball team…Hell, he’d never even made the chess team. He had been the school screw-up, and now he could brag that he and Dayna had…

Dayna turned away from the mirror with disgust, her cheeks flushing. She staggered to the doorway of the bedroom. Using the frame to hold herself erect, she shouted, “Get up!”

“Wha–?” Skip rose, the comforter bunched at his flabby waist, his chest bare and the pathetic tattoo of a red devil across the front of his right bicep.

Vague memories of kissing that image flitted through her foggy brain. Dayna picked up a pillow discarded on the floor during their frenzied arrival and threw it at his head.

Skip ducked, then slid off the bed, his behind exposed, another image of a werewolf on his left butt cheek. Dayna convulsed at a hazy memory of talking to that tattoo.

“You weren’t so eager to get rid of me last night.” Skip stood in all his naked glory, which wasn’t much.

“Ugh. I’m never drinking again,” Dayna muttered under her breath. “I said get dressed and get out of  here.” A shoe sailed past Skip’s head.

Her unwanted guest scrambled to find his clothes.

“Hey, cut it out, Dayna!” Skip was living up to his namesake as he struggled into his work pants, bouncing toward the door.

Dayna’s face split into a demonic smile that was known to strike fear in the hearts of single men everywhere. Here, she thought, was the elusive Easter Bunny.

She watched Skip hop toward his escape as though he were in the Fourth of July potato sack race.

Dayna picked up a shirt that had been discarded on the floor and threw it at him. The garment appeared to have a life of its own and engulfed his head. Skip’s muffled cries were nearly smothered by the material. His hands tore at the shirt to no avail. 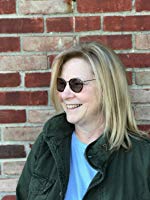 Brit Lunden is a prolific author who’s written over 50 books in assorted genres under different pen names. Bulwark was her first effort in adult fiction and was chosen by several of her fellow authors as the basis for a new series, A Bulwark Anthology. Using her characters, they are creating new denizens in spin-off stories to this bizarre town. Brit Lunden lives on Long Island in a house full of helpful ghosts.

3 winners will receive a finished copy of THE DEVIL AND DAYNA DALTON, US Only.