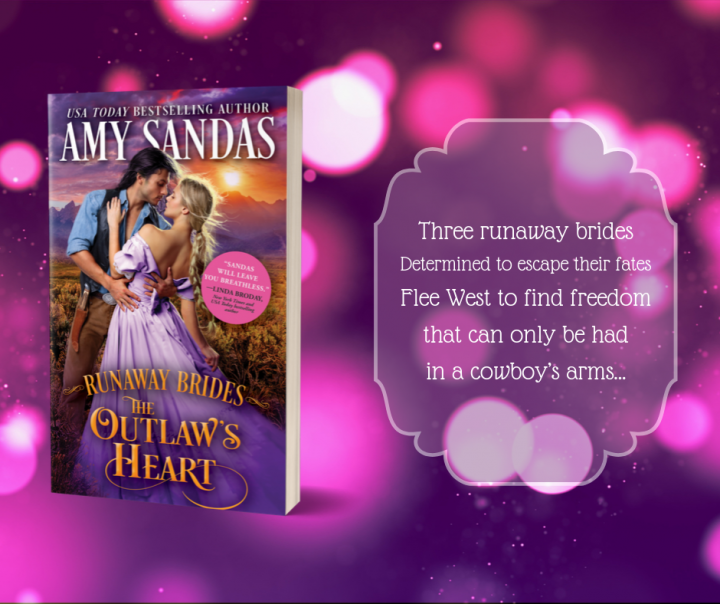 Determined to escape their fates

Flee West to find freedom that can only be had

in a cowboy’s arms…

Desperate to escape an unhappy marriage, Boston socialite Evelyn Perkins flees west in hopes of losing herself to the dusty frontier. But when her train is boarded by outlaws, Evelyn is taken for ransom. Despite her terror, Evelyn fears being returned to her husband more. Refusing to cooperate, she becomes the responsibility of a man whose steady gaze threatens to pierce her brave façade and reach the wounded heart within.

Gabriel Sloan has his orders, but the haunting shadows in the pretty young woman’s eyes spark an intense protective instinct he can’t deny. Every look, every touch brings them closer together. He would do anything to protect her, but dangerous men are on their trail, and soon the two must face Evelyn’s darkest nightmare—or risk losing the unexpected joy they’ve found forever…

“Pure perfection.”—Romancing the Book for The Untouchable Earl

“Smart and Sexy.”—Booklist for Luck is No Lady 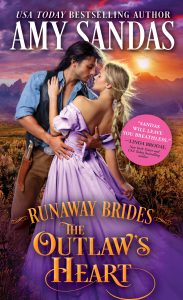 The tall, muscled man who’d stared at her across the fire was even more intimidating up close. He had expansive shoulders, thick arms barely contained in his pale-colored cotton shirt, and powerful legs encased in worn denim. In a graceful economy of muscle and movement, he folded his large body into a crouch, bringing his face even with hers.

And what a face it was. Strong and beautiful in a way she’d never seen before. He had a broad forehead and a long, straight nose. His jaw was sharply angled, as were his cheekbones, but his mouth was wide and his lips were soft and full.

Startled by his unexpected proximity, Evelyn flinched when he lifted his hand, realizing belatedly that he held a canteen and was offering it to her.

He did not react to her obvious fear. Instead, he remained still—his expression flat as his eyes held hers. “It’s water,” he said.

His voice matched the rest of him—richly complex and powerful. Something strange rolled through her at the sound. Like anticipation of a storm when you hear the rumble of distant thunder, but warmer.

Her lashes flickered as she glanced down at the canteen. She was unbelievably thirsty, but how could she trust anything offered by men who held her captive?

“If you want to survive, you’ll drink the water and eat the food,” he said quietly. The words were just between them. Still she did not reach for the canteen. “You want to live?” he asked, raising a brow.

Evelyn lifted her chin, regaining eye contact with the man, despite her uncertainty and fear. “Yes, I want to live,” she replied, surprising herself by the conviction in her words.

With a single, short nod, he extended the canteen a bit more. “Then drink.”

She lifted her hands to take the water, but because of the binding rope and her frozen fingers, she couldn’t grasp it.

Realizing her predicament, he gave a quiet grunt, then set the canteen on the ground and reached for her wrists. His large, warm hands surrounded her curled fists. He held them in silence for a moment—as if his only intention was to share his heat and offer comfort.

Though Evelyn felt the icy stiffness in her fingers dissipating, she resisted the instinctive desire to accept anything more. But she didn’t pull away.

And she wasn’t sure why.

She searched his gaze in the darkness. She wanted to believe him, but she knew far too well how easily a man could hide wicked intent. “I am not so naive,” she replied, her voice barely more than a murmur of sound.

He did nothing to indicate he heard her reply as he released his hold on her hands and deftly loosened the ropes. He did not remove them altogether, but he allowed for a bit of freedom to use her hands more effectively. Then he picked up the canteen and offered it once again.

Evelyn managed to bring it to her lips this time and took a few long drinks. The water soothed her throat, but it also made her very aware of her empty stomach. Lowering the canteen, she offered it back to the man who remained patiently beside her. Watching her in silence.

His nearness was discomfiting. As were his size and his quiet manner.

She had no idea what to make of him. There was strength in him, something his muscled form attested to without effort, but he displayed not the slightest hint of temper or violence.

Of course, Matthew hadn’t either…until something set him off.

The outlaw took the canteen, never shifting his gaze from hers. Not even when the voices around the fire rose higher in discord.

“Shit,” the young one named Ramsey exclaimed, frustration clear in his tone. “We can still ransom the woman. I mean, look at her.”

Evelyn stiffened under the sudden flood of attention. The man crouched before her was still watching her carefully, and she feared she might have revealed her trepidation when his brows lowered over his gaze.

Did she really believe she was better off with these outlaws than in her husband’s hands?

Yes. Yes, she did. But that didn’t mean she was not in danger.

He stared at her for a moment longer before he rose to his feet and walked away without a word, leaving the canteen on the ground beside her. She couldn’t keep her gaze from following his powerful form as he melted into the darkness beyond the fire while the others continued discussing her fate.

She expected to release a breath of relief at being left alone again, but it didn’t come.

“With her fancy clothes and fine airs, there’s gotta be someone somewhere who’ll be willing to pay good money to get her back.”

Evelyn listened to the exchange with increasing tension. These men were right about one thing. Her husband would no doubt be willing to pay a small fortune to get her back. But there was nothing in the world that would convince her to tell them that. 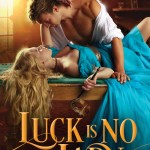 Exclusive Cover Reveal LUCK IS NO LADY by Amy Sand