by Shannyn Schroeder
Published by Entangled 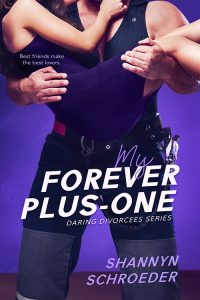 Evelyn is a woman who has everything–a successful career as a TV producer, and her best friend—sexy firefighter Owen Hanson—who looks mighty fine as her plus-one to awards dinners and backyard picnics. But something is missing and it’s not just the sex.

Owen Hanson is living the dream—a Chicago firefighter who volunteers at a youth center on the Southside and he’s got his best friend Evelyn—who knows him better than anyone. When Evelyn starts hinting about wanting something more, Owen panics.

Sex changes everything but taking their relationship to the next level surpasses even their wildest dreams. Until Evelyn’s ex-husband shows up and could make even the most perfect couple crash and burn…

Each book in the Daring Divorcees series is STANDALONE: 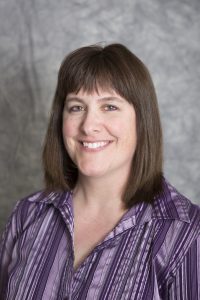 Shannyn is an occasional English teacher, who also works as a part-time editor while raising her three kids.

Even though she wrote from high school through college (mostly poetry), she’d never considered a career as an author. Writing fell by the wayside as she focused her energy on creating lesson plans and new and fabulous ways to torment her teen students. One group in particular dubbed her “The Torture Master,” a title she carried into motherhood.

After the birth of baby number two, Shannyn resigned from teaching and fell in love with reading romance novels. She read so many books so quickly that her husband teased, “If you’re going to read so many damn books, why don’t you just write one?”

That first book is safely buried on her hard drive, but the process set Shannyn on the path to where she is today. The 6-book O’Leary series has wrapped up, as well as 2 Hot & Nerdy new adult trilogies. She’s currently working on her next series.

She is recovering from her Diet Coke addiction, fears putting her foot in her mouth on social media, and has a renewed appreciation for the bad girls of the world.

Shannyn is represented by Frances Black of Literary Counsel.

A book, a box of tissues, a lamp, 2 Kindles, and some chocolate

I am a fan of many authors and I’ve met quite a few. I’m not a squealer, but I will stand in awe when I meet someone whose books I like.

Stupid people – or at least people who sound stupid. I also cringe any time I do or say something stupid, which is part of why I am a really quiet person.

I wish I could plot. I’m better now than I was as a new writer. I do a lot of pre-writing getting to know my characters and stuff. I do envision scenes while writing, but I don’t do much actual plotting.

Just is probably my favorite word to use. I know this because whenever I’m done writing a book and I’ve revised it, I do a search for overused words. Just always tops the list. Beyond that, I wouldn’t say I have favorites, but I do swear a lot. My friends often joke that if I remove all the fucks from my books, I would lose a thousand words (which is a gross exaggeration, I’m sure) 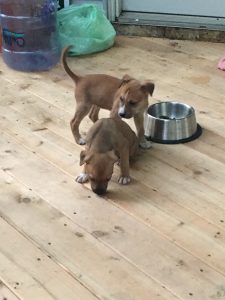 And for all of you dog lovers out there, here are a couple of pictures of my pups. My husband brought them home a year ago (without warning, mind you). And here they are a year later, so much biger. Yes, that is the same bowl for comparison.