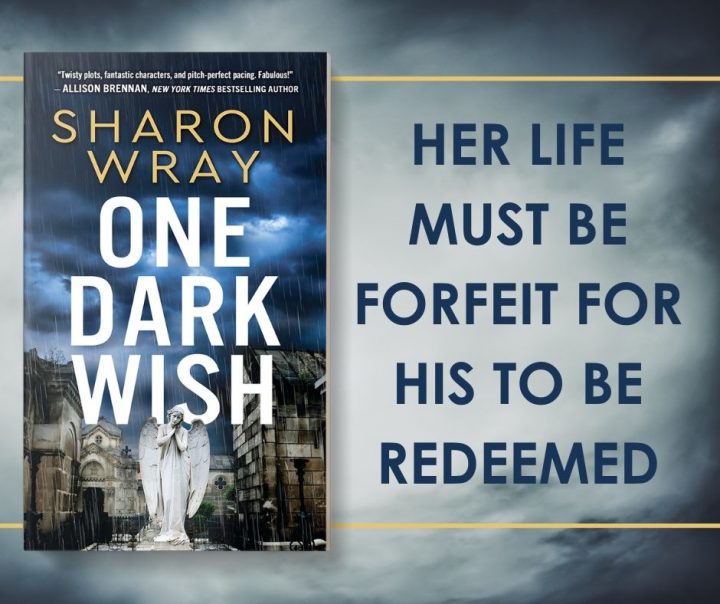 Her life must be forfeit for his to be redeemed

Historian Sarah Munro is not used to being shot at, but that’s just what happens while she’s poking around cemeteries on Georgia’s Isle of Grace, searching for the key to a centuries-old cipher. Her quest has unwittingly drawn the attention of two deadly enemies intent on destroying each other—and anyone who gets in their way.

Ex–Green Beret Major Nate Walker is on a mission of his own: to restore the honor of his men. To do that, he is required to stop Sarah—or one of his own men will die. Caught in the middle of a deadly rivalry, Nate can’t afford to trust the woman standing in his way. But his heart says he can’t afford not to…

“Phenomenal!… Filled with action and passion that will leave you breathless.”—Joyfully Reviewed

“Intriguing, with steamy romance and forbidden love… You will not be able to turn the pages fast enough!”—Fresh Fiction

Sharon Wray is a librarian/archivist who studied dress design in the couture houses of Paris and now writes stories of adventure, suspense, and love. She’s a three-time Daphne du Maurier® winner and an eight-time RWA Golden Heart® Finalist. Visit her online at sharonwray.com. Sharon lives in Northern Virginia with her husband, teenage twins, and Donut the Family Dog. 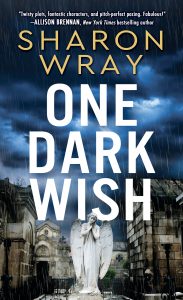 “The man bowed.” Sarah Munro hiked her straw bag higher on her shoulder and followed the officer down the Savannah Police Department’s hallway. He held a cell phone to his ear, and she yanked his arm. “And a woman died tonight.”

He nodded, but his deep frown, as well as his dismissive wave, told her he wasn’t too concerned about the murder. Or the fact that Sarah had found the body in the Savannah Preservation Office’s courtyard fountain.

Was a death in the historic district so commonplace that it didn’t warrant its own investigator? Frustrated, she followed him around the corner toward the second-floor landing when her cell phone buzzed. A text from her father. Where are you?

She halted near the stairs, her fingers hovering over the phone’s keyboard. She debated how much to tell him. Then again, he probably already knew.

She texted, I’ll be home soon.

Someone bumped her as they passed, and she moved closer to the vending machine that carried only rows of Coke cans. Her officer stood nearby, talking on the phone, while federal, state, and local LEOs congregated in groups around the open area. Her father had told her that the city had numerous task forces, all trying to combat the rising crime rate. She and her dad had returned to Savannah nine months ago, and in that short time, they’d both noticed the uptick in drug use and violence.

It’s dark. I’ll come get you, her father texted back.

No. Not only did she not want her father worrying about her, he wasn’t supposed to drive. I’m leaving soon. Drink your tea.

Despite the ache in her chest, she smiled. Yes, he hated the tea. Yet it was the only thing that helped with his recurring seizures. And if he thought that being even more cranky than usual meant she’d ease up on the herbal leaves, he was wrong. I don’t care. Drink it.

She glanced at her officer—who was still on his phone—and debated leaving. If the cops wanted her statement, they knew where she worked. The same place where a woman had been murdered. “I’m leaving, Officer. But I know what I saw.”

He ignored her, and she turned toward the stairs.

She blinked one man into focus. Tall, broad shoulders, long blond hair tied at the base of his neck, angular face, and deep, ocean-green eyes. The kind a girl could lose herself in. “Nate?”

Was that her breathy voice? She swallowed, and a warm flush rose from her neck to her cheeks. She wasn’t sure why, but since meeting Nate Walker yesterday, she’d felt shaky and incoherent and…restless.

Does he know what I did to his map?

“I heard what happened.” He touched her arm before shoving both hands in the front pockets of his jeans. His biker jacket stretched across his shoulders, the black leather rustling with the movement. “Are you okay?”

“I wasn’t hurt.” She stared at the red-and-white vending machine and blinked. Daughters of cops didn’t cry. They endured. “This is my fault, Nate. I’d asked my assistant to do some research for me. I had no idea she was staying late.”

“This isn’t your fault.” He leaned in closer, the scar on his cheek appearing deeper and more ragged. His pine-scented aftershave tickled her nose. “I’m sorry.”

She wiped her palms on her chiffon skirt, relieved he didn’t seem to realize she’d secretly photographed the seventeenth-century map he’d brought to the preservation office for her to look at. The map included the only layout she’d ever seen of the remote, colonial-era Cemetery of Lost Children on the Isle of Grace. Even though the property’s owner—and Nate himself—had both told her to stay away, she was determined to visit as soon as possible.

She was a terrible person. “My dad was a police chief in Boston, so unfortunately I’m used to things like this. I’d just hoped Savannah was safer.”

“Nate?” A man built like a wrestler with long, black, braided hair yelled from the lobby on the first floor. “We gotta go, man.”

Nate ignored him and kept his attention on her mouth. “I couldn’t help but overhear. What did you see?”

She licked her lips. “You’d never believe me.” She wasn’t sure she believed it herself. Loud voices downstairs distracted her. Two military policemen in full uniform and carrying weapons had entered the station. “That’s odd. What do you think they want?”

Nate took her hand and led her into a nearby alcove. “What did you see?”

She pressed her hands against his chest. His heart pounded, and he radiated heat like an engine revving. “What are you doing?”

The MPs were right behind Nate’s buddy.

Had she moaned? Good golly Moses.

Nate broke off the kiss because the man with the braid had taken his arm and dragged him down the hallway to the emergency exit, the MPs on their heels. Chills scurried along her arms, and she wrapped her sweater around herself. She touched her swollen lips, still stunned. Still tasting his peppermint mouthwash. Still inhaling his scent that reminded her of freshly cut grass and pine trees.

Nate glanced at her before he hit the metal exit and disappeared. The door slammed shut with a loud reverb. Apparently, he’d locked it as well. When the MPs couldn’t force it open, they turned and ran past her, one of them brushing her skirt as they headed toward the stairs.

What do MPs want with Nate Walker?

“Miss Munro?” The officer who’d been ignoring her touched her elbow. “I’m ready for your statement.”

She pulled away, her attention on the MPs racing out the front doors. She was a woman who sought the truth in both her professional and personal life. But tonight’s revelation was more than a cheap magazine tell-all. It was an earth-shattering event that stripped away the delusions she’d been carrying her entire adult life. One delusion in particular: when Nate’s lips had touched hers, she discovered she’d never truly understood what it meant to be kissed.

She nodded. She’d give her statement. Then go home to her father. But as she followed the officer into an interrogation room, she couldn’t help but wonder if she’d ever see Nate again. No. If she was being honest with herself, which she always tried to be, she wondered if she’d ever kiss Nate again.