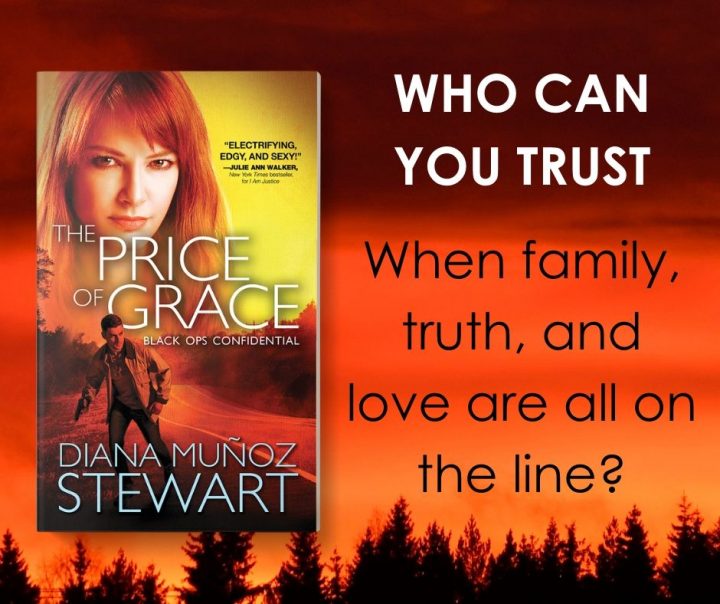 Who can you trust

When family, truth, and love are all on the line?

Gracie Parish knows the true cost of trust. Rescued as a child by the infamous Parish family, she became a member of their covert sisterhood of vigilantes. Gracie saw her most precious relationships destroyed by secrecy. She learned long ago to protect her heart as well as her family’s secrets.

Special Agent Leif “Dusty” McAllister will do anything to uncover the truth about the Parish family’s covert operations. Dusty knows Gracie is his ticket in. He’ll use everything he’s got—fair, unfair, and just plain wrong—to break through her defenses. But the more he gets to know Gracie and her family’s mission, the harder he starts to fall. Neither one is sure they’ll get out of this with their lives—or their hearts—intact.

Black Ops Confidential series:
I Am Justice (Book 1)
The Price of Grace (Book 2)
The Cost of Honor (Book 3)

Readers are raving about the Black Ops Confidential series:

“A high-octane…satisfying roller-coaster ride. Stewart’s talent shines.”—Publishers Weekly for The Price of Grace

Having earned her MFA in Creative Writing, Diana Munoz Stewart went on to write several novels that garnered awards and recognition in the paranormal, science fiction, and contemporary romance genres. A believer in the power of words to heal and connect, she blogs and provides web-content on health, writing, and social issues. Learn more or connect with Diana at dianamunozstewart.com, facebook.com/DMSwrites/, and on Twitter at @dmunozstewart. She resides in Pennsylvania. 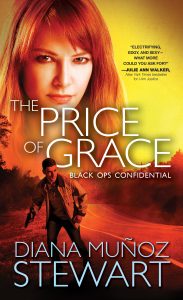 Dusty entered the packed club. Not an empty seat at the bar. Or an empty space around it. People pushed in hard.

Behind the bar, the club’s owner, little Miss Gracie Parish was overrun, making multiple drinks simultaneously, while she nodded to acknowledge people and instruct servers.

Only one other person helped Gracie behind the bar. A brunette in the server’s white shirt and black pants. He pulled beers and gave shots, but Dusty didn’t see him making any mixed drinks.

Never say he wasn’t a man to help a friend in distress. Even if he had orchestrated that distress in order to get close to her, use her to get to her family and uncover their vigilante activities.

He navigated his way through the crowd with care. Being as big as he was, he was well aware of his ability to intimidate without trying, so he tapped shoulders, nodded politely, and made his way behind the bar as graciously as he could.

Upon seeing him, Gracie jerked her head in surprise then smiled. Hadn’t expected that. Kind of warmed his heart.

He put up a single digit, a give me a second before you kick me out. He leaned closer. She was a good foot shorter. “Stopped by to check on you and have that drink.” He gazed around. “Looks like you’re slammed. Okay if I help? Worked as a bartender in college.”

Gracie’s face walked the line between yes please and stay the hell away, then tipped over. “I could use the help.”

She sent the obviously relieved server back into the club, opened a couple of beers and handed them to a guy across the bar. She took his cash and smiled when he told her to keep the change.

When she turned back to Dusty, her eyes ran down him like it was involuntary. That kind of warmed him too. Warm enough to start a fire.

She pointed to a notepad. “There are two parties that have a tab, try to handle those. You can just write the drinks down. We have the credit cards, so we can tally them later.”

She began making a mixed drink, efficient and calm and sexy as anything he’d ever seen. “Cash is king for you. Drink prices are there.” She pointed to a laminated document held together at a punch-holed corner with a silver hoop. She winged a slice of lemon around the drink she’d made and handed it to a woman, who handed Gracie a credit card. Running the card, she gave Dusty a quick overview of the cash register.

Basically, he had to push three buttons. He could handle that and the math. “What about credit/debit cards?”

She pulled out the receipt that had just spit from the credit card machine. “I’ll handle all people with cards.”

She smiled, and as she walked away, tossed back, “Thanks. Really.”

Lady had a great backside. “Happy to help.”

Quick to learn where everything was, Dusty hit his stride. It wasn’t hard to find people with cash or on account, so he didn’t hurt for business. For the next few hours, he and Gracie worked, brushing hotly against each other as they buzzed here and there.

But, much to his disappointment, not standing in one place long enough to talk or explore that heat. The crowd kept them hopping. A few people got handsy with him and her, trying to get attention. Nothing they couldn’t handle, until the big guy.

Dusty watched him. Impatient as hell, using his size to insert himself at the bar as if the crowd were an insult. He put two fingers in his mouth and whistled loud to get Gracie’s attention. She turned.

If it had been him, Dusty would’ve ignored the guy. But he saw Gracie’s eyes evaluate the guy and the situation. A smile on her face, she went right over. They exchanged a few words. She tapped the bar as if asking for his patience and began to turn.

Guy’s big hand shot out and grabbed her wrist. Gracie looked at where he held her, said something, smiled like it was the only warning she’d give.

The guy’s knuckles whitened on her wrist. A few people at the bar were paying attention now. Someone had taken out a cell. Gracie Parish on camera. Which meant she wasn’t likely to pull any self-defense. She surely wouldn’t want that all over the internet.

Dusty would’ve moved to help, but he was also sure the lady didn’t need it and wouldn’t appreciate him butting in. Plus, he wanted to see what she’d do.

Still smiling at the guy, she reached under the bar, pulled out a nozzle for the fountain drinks, and blasted the guy, not in the face, but directly up his nose.

Shock and the sting of it had him reeling back. The people lining the bar sprang away. Gracie backed up too but kept hold of the nozzle.

That second was all that was needed for one of the bouncers to move in for the kill. He wrestled the dude, got him under control, grabbed him by the neck. Forcing the guy’s head down, he marched the soaked idiot out.

By the time the bouncer reached the front door, Gracie was already getting bar towels and handing them to customers, apologizing for the mess and offering free drinks.

Maybe feeling his gaze, she looked over at him. He’d thought he’d see condemnation, like why hadn’t he hotfooted it over there and given her a hand, but she smiled. She smiled and mouthed, “That was fun.”

Lady was going to break his heart. 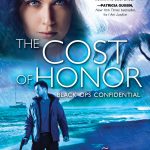 #Giveaway Excerpt The Cost of Honor By Diana Muño