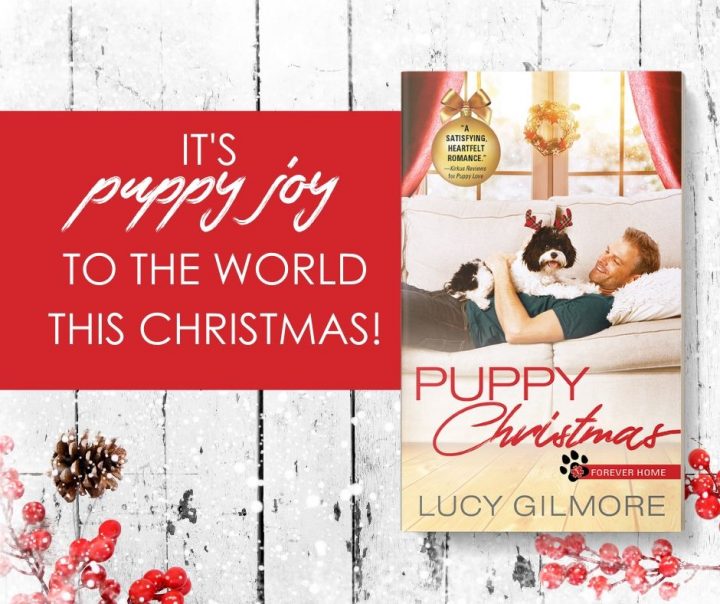 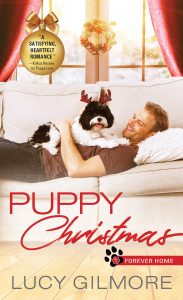 are matchmakers in the making…

Lila Vasquez might not be the “fun one” at Puppy Promise—the service puppy training school she runs with her sisters—but she can always be counted on to get things done. So when her latest client shows an interest in princess gowns over power suits, Lila puts aside her scruples, straps on the glittery heels, and gets to work.

If only the adorable six-year-old’s father wasn’t such an appealing Prince Charming.

Ford’s whole life revolves around his daughter…until he meets Lila. Smart, capable, and amazing at helping Emily gain confidence with her new service puppy at her side, Lila is everything he ever wanted—but she’s way out of his league. Good thing Emily and her new pup are up to the matchmaking task. This Christmas, it’s all hands (and paws) on deck!

Lucy Gilmore is a contemporary romance author with a love of puppies, rainbows, and happily ever afters. She began her reading (and writing) career as an English literature major and ended as a die-hard fan of romance in all forms. When she’s not rolling around with her two Akitas, she can be found hiking, biking, or with her nose buried in a book. Visit her online at http://lucygilmore.com. She lives in the Spokane, WA area.

“We’re going to the symphony. We’re visiting art galleries and sipping overpriced white wine. Oh, I’ve got it! You’re taking me to the fanciest store in the city and buying me a new dress. I’ll be like Pretty Woman, except you won’t have to pay me for s-e-x later.”

Ford cast a sidelong look at Lila. She’d caught her lower lip between her teeth, but she didn’t look up from the phone in her lap.

“I like to make the first one free to get the ladies hooked,” he explained. “Then I ratchet up the price accordingly.”

That didn’t get her to take the bait, either. “Turn right at the next intersection,” she instructed him. “Parking should be in the big lot on the right. And for the record, I don’t think that’s a very good way to run your gigolo business. Why would the cow pay for milk after the fact?”

“The cow isn’t the one paying for the milk. The cow is the one providing it.” He clucked his tongue and shook his head. “And here I thought you were supposed to be the smart one.”

That got her to glance up, her gaze sharp. “I never said that.”

“No, you didn’t,” he agreed cheerfully as he pulled his minivan into the last of a row of cars. “But that doesn’t make it any less true.”

She had no response to this, which was just as well since they’d arrived at their mystery destination. He had no idea where they were or why, but he didn’t care. The fact that he was on an actual date with Lila was enough.

It wasn’t just any date, either. He’d had to lift nary a finger to make it happen. Apparently, Lila took her role as invitee very seriously. From dropping Emily off at her mom’s house to planning the evening from start to finish, she’d handled everything on her own. All Ford had to do was doll himself up and wait to be whisked away for an evening of romantic bliss.

He, too, was hard just thinking about it.

Although that wasn’t really fair. He’d been in the same state of agonized anticipation for days. No number of cold showers or hot showers or short, frantic showers with his cock in his hand had helped. Nor had Lila’s constant presence in his home. How she managed to sit with his daughter and Jeeves, cool and collected as she went through the steps of puppy training, was a mystery.

“Here. We’re going to need this.” Lila reached into the pocket of the white wool coat she wore and handed him a flask. “It’s like fifteen degrees outside. It’s straight bourbon, in case you’re wondering.”

“You remembered,” he said as he accepted the flask and took a long pull. “My vice of choice.”

It wasn’t the cheap stuff, either. The woodsy-sweet taste coated his tongue and throat, the warm burn making him feel almost giddy.

“I have my occasional value,” she admitted. “Remembering things in painstaking detail doesn’t make me a very endearing person, but it does make me a useful one.”

He opened his mouth to argue, to tell her that her value lay primarily in her ability to make him feel relaxed and happy and like a hot-blooded man again, but he didn’t have a chance to get the words out before she pulled a white knit cap over her head and secured her gloves onto her hands.

Lila was a stunning woman almost all the time, her poise and grace so ingrained that he doubted she was aware of them, but there was something about the way the cap framed her face that almost undid him. She looked absurdly youthful, her cheeks flushed from the bourbon and the cold and—he hoped—the company.

Unable to help himself, he leaned across the console and dropped a kiss onto her slightly parted lips. Surprise rendered her delightfully malleable, her mouth giving way to his for a full ten seconds before she realized what was happening and kissed him back. That was delightful, too, but for entirely different reasons—most of which had to do with the fact that she wasn’t about to let him have his wicked way with her without giving him his own back again. In fact, that was a thing she’d done since the day they’d first met. He could, on occasion, catch her off guard, but it rarely lasted for long.

She proved it by deepening the kiss. The assault of her tongue and the warm press of her mouth against his invoked every sense he had—taste and smell and glorious touch. She even released a soft moan into his mouth that made his head whir with possibilities.

And then she ended it as quickly as it began.

“Let’s skip the date,” he said before he’d even managed to open his eyes again. “I don’t care if we’re flying to the Eiffel Tower on a private jet run entirely on champagne. Let’s stay in this van and make out instead.”

She didn’t move. “You don’t want to see what I have planned?”

He’d opened his eyes by this time, but the parking lot lighting was dim, and what little vision he did have was obscured by the stars dazzling his vision. Actual g-o-d-d-a-m-n stars.