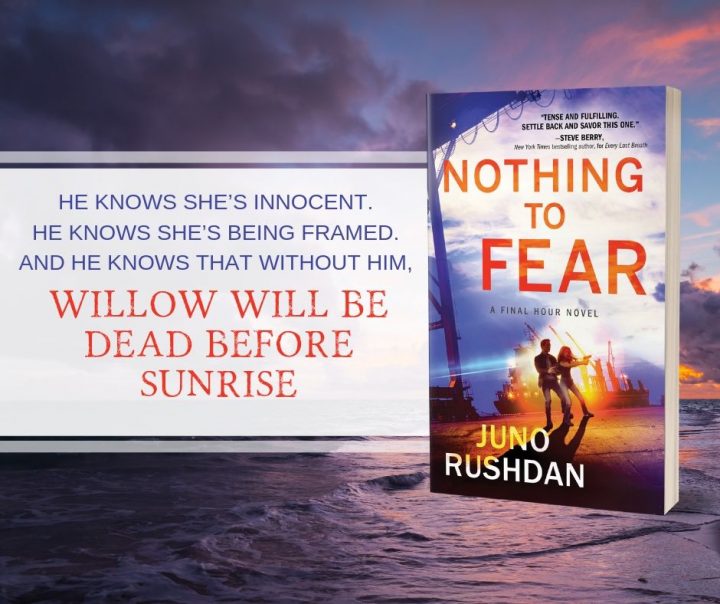 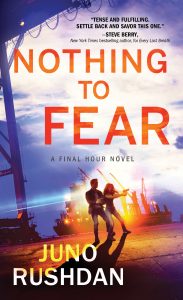 Nothing to Fear
by Juno Rushdan
Publication date: August 27, 2019

The clock is ticking.

Fearsome Gray Box operative Gideon Stone is devoted to his work and his team. He’s never given reason to doubt his loyalty…until he’s tasked with investigating Willow Harper, a beguiling cryptologist suspected of selling deadly bio-agents on the black market.

Thrust into the crossfire of an insidious international conspiracy, Gideon will do anything to keep Willow safe…even if that means waging war against his own. With time running out, an unlikely bond pushes limits—and forges loyalties. Every move they make counts. And the real traitor is always watching…

What People Are Saying About Juno Rushdan:

“Tense and fulfilling. Settle back and savor this one.”— STEVE BERRY, New York Times bestselling author

Juno Rushdan draws from real-life inspiration as a former U.S. Air Force Intelligence Officer to craft sizzling romantic thrillers.  Although she is a native New Yorker, wanderlust has taken her across the globe. She’s visited more than twenty different countries and has lived in England and Germany. When she’s not writing, Juno loves spending time with her family. She currently resides in Virginia.

Willow’s car nosedived down a long ramp that mouthed open to three lanes. Vehicles lining the two on the left were stopped at a red light.

She grabbed the wheel and veered toward the empty right lane.

Relief flashed through her. But as quickly as it came, it was gone. Her car had no brakes and was on a collision course with a major intersection of traffic.

Pressure welled in her chest.

Figures. She’d just had the most highly charged experience in her short life with a guy she was crazy attracted to, and now she was going to die. After living a neutral—

Neutral. She shifted from drive to neutral and dragged the tires against the concrete curb. The friction would shave off some speed but not enough. Not while pitched downhill on a trajectory sending her right into traffic with the cruise control jammed at sixty.

She had to avoid causing a domino effect of collisions in the intersection. Cranking the wheel, she plowed over the curb, scraping the undercarriage, and climbed the grassy berm over uneven terrain. Her gaze flickered up to the rearview mirror and to a red Jeep speeding up behind her.

A concrete barricade ahead stole her attention and her breath. She spun the wheel, turning into the main street traffic. Cars squealed, braking. Another skidded and rear-ended a truck.

The Jeep bulldozed up beside her in the left lane, horn honking.

What was she supposed to do? What could she do?

The four-wheel-drive vehicle nosed past her bumper and crashed into her car, forcing her to make a hard right—straight into the parking lot of a grocery store.

A woman yapping on her cell phone while rooting in her purse crossed in front of them. Willow’s chest turned to a block of ice.

The Jeep that had run up beside her tapped her car to the right, engaging her focus.

She steered away from the woman to the side of the building and a vacant part of the lot.

The sound of her name penetrated her shroud of fear. She looked over through the Jeep’s open passenger-side window.

He signaled to her, punching his hand down and yanking his fist up toward his shoulder. She glanced to her side.

She gripped the handle and wrenched up. The car whipped into a wild spin. She gasped. Light swirled into a haze of gray. Nausea flooded her in a violent wave. Her body shivered like it wanted to splinter into a hundred pieces.

Pressing her head against the seat, she released the wheel and crossed her arms, hands to her shoulders. The tail of the car crashed into something, shattering the back window. The vehicle rocked, jostling her forward.

A dense pillow punched her, throttling her back. A white cloud engulfed everything. The airbag sucked up the space around her. A scream strangled in her throat and died.

Dust and white powder clogged her nose and esophagus. She choked on the remnants of terror.

A loud pop echoed. Her airbag deflated with a hiss, as if it’d been cut. She drew in a shuddering breath and waved to clear the congesting dust from her face.

Gideon whipped a double-handled knife closed and reached for her.

A whimper slipped from her lips as she cringed, raising her arm. It was all too much—losing the brakes, the sound of metal grating, hitting vehicles. Almost dying. She needed to breathe, gain her bearings, before he touched her.

“I want to help you from the car and make sure you’re okay. I won’t hurt you.” He reached for her slowly. “Okay?”

Shutting her eyes, she clutched the strap of her purse still draped over her and nodded.

He unfastened her seatbelt. One strong arm slipped under her legs, the other curled around her shoulders. He lifted her out the car, tucking her against his large frame.

Particles clung to her nostrils, burned her throat, and filled her lungs. She coughed and raked in a glorious breath of fresh air.

Gideon’s long legs stretched quickly, carrying her to his car. In his powerful arms, warm and solid, a blanket of calm covered her, dampening her chaotic thoughts save one.

She was safe with him.

He opened the passenger’s door and set her inside, but she didn’t want him to let go. Not yet.

Everything had unraveled in minutes. Trying to slow the car, the parking lot. Gideon helping. She still couldn’t make sense of it.

Gideon crouched in front of Willow and examined her, smoothing his big hands over her face and her hair. He tilted her chin up. “Did you hit your head? You might have a concussion.”

Staring into his wide eyes, now darkened to the bluish gray of a stormy sky in this light, her breathing slowed and her bunched muscles uncoiled. He looked shaken, off beat from his normal steady cadence.

“Willow? Are you all right?”

I’m okay. How bizarre since she’d almost died. “Everything is fuzzy, but I didn’t hit my head. I don’t think I have a concussion.”

“You can get it from whiplash. A doctor should check you.”

Before she voiced objections, a sheriff’s car pulled into the lot, lights flashing, siren muted. Gideon patted her knee and left her side. He spoke to the officer, pointing to her car, waving his hands in the air as if explaining everything that’d happened.

What exactly had happened?

This morning, nothing was wrong with her brakes. She’d had the car checked recently, never pushed the service due date. Yet she’d nearly been killed.