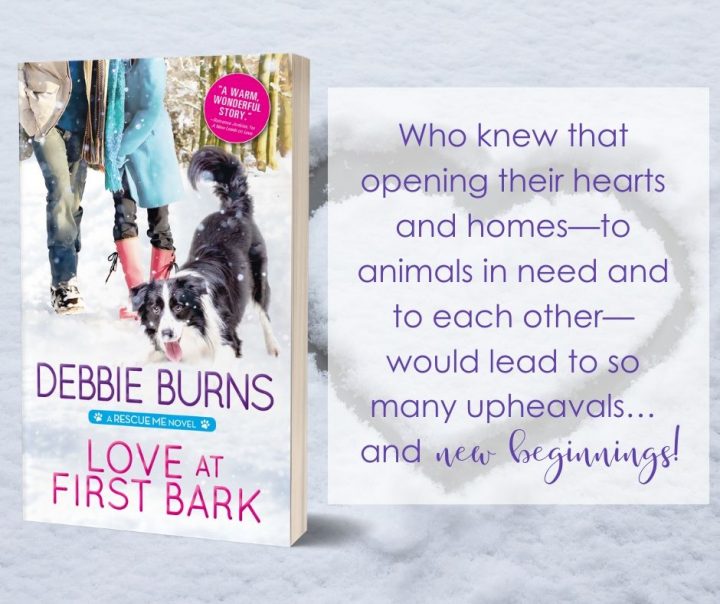 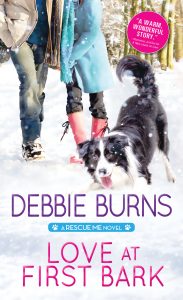 “This heartstring-tugger is certain to win fans.” —Publishers Weekly STARRED Review for A New Leash on Love

Animal portrait painter Mia Chambers and architect Ben Thomas have volunteered at the High Grove Animal Shelter for years, and they share a complicated history. Ben has secretly loved Mia all this time, but she was married to his best friend. Now she’s newly widowed, with a young son, and Ben doesn’t know how to tell her what’s in his heart. All he can do is stay close, help her as much as she’ll let him, and watch for the right moment to bare his soul.

When a dozen adorable border collies get dumped in St. Louis’ biggest park, everyone at the shelter mobilizes for a large-scale rescue. Rushing to the park to round up the frisky collies, Ben and Mia unexpectedly plunge into a new phase of their entangled lives. Who knew that opening their hearts and homes—to animals in need and to each other—would lead to so many upheavals…and new beginnings…?

What People Are Saying About Debbie Burns:

“[A] warm, wonderful story.”—Romance Junkies for A New Leash on Love

“A tender love story…will win the hearts of animal fanciers.”—Publishers Weekly for My Forever Home

Debbie Burns’ writing commendations include a Booklist Top 10 Romance Debut of 2017, a Starred Review from Publishers Weekly, and a Top Pick from RT Book Reviews, as well as first-place awards for short stories, flash fiction, and longer selections. She lives in St. Louis with her family, two phenomenal rescue dogs, and a somewhat tetchy Maine coon cat who everyone loves anyway. Visit her online at www.authordebbieburns.com/

Mia stepped out from Ollie’s room to find the main cabin empty. A single lamp was on, and the dwindling fire still glowed in the fireplace. Neither Ben nor Turbo around, and Mia wondered if Ben was done for the night too. A rush of disappointment swept over her at the thought of not getting to say good night to him.

Swallowing it down, she headed to the door with the dogs. The snow boots were all lined up beside the door on two long, thick rugs that were wet from the clumps of ice and snow that had been clinging to the boots when they’d come inside. The cold, wet patches stung Mia’s bare feet as she slipped into hers. She grabbed her coat from the closet and snaked it up one arm, transferred the puppy, then snaked it up the other.

When Mia moved to open the door and realized it was unlocked, she looked closer at the row of boots. Ben’s were missing. Her heart skittered in her chest. She opened the door with bated breath, but he was nowhere in sight.

Feeling the rush of cold air, Sam gave a determined shake of his head. His muscles tensed against her as if he was getting ready to leap. Sadie trotted backward several feet from the door as if to say “No thanks.”

Holding it open wider, Mia encouraged her. “Come on, girl. It’ll be a quick one, promise.”

Sadie whined but reluctantly followed Mia outside to the porch. Blue-white moonlight poured over the yard, bright enough to create shadows from the trees on the snow, and thousands of stars dotted the sky. The puppy squirmed in her arms as she stepped out deeper into the yard, crunching snow under her boots, until she set him down and zipped her coat.

Ben and Turbo were nowhere to be seen. She headed out into the yard, unable to entice Sadie off the snow-cleared porch. Sam trotted along, creating his own path, diving underneath windswept mounds, burying himself completely, then popping up and shaking himself off.

Mia was laughing at his antics when Sadie tore off the porch at something she’d spotted, barking and racing away into the darkness at the side of the cabin. Mia tensed, waiting, squinting to make out something in the darkness while trying to will Sadie back. “Ben?”

“Thank God,” she said when he called out into the night that it was him. She felt a rush of hesitation as he neared. “I thought the dogs might need to get outside another time before I put them in their crates.”

“As soon as his head hit the pillow.”

“Fresh air will do that to you.” Ben fell into step beside her as they headed toward the house.

Mia’s throat grew tight, and there was no denying why. They needed to talk. For hours into the night. There was so much to discuss. The only problem was Mia didn’t want to waste another minute of it not kissing him.

She swallowed hard. “Thanks for everything. For coming and all. For being so good to him.”

She did her best to snip through the strings of connection drawing her to him. She was at a loss for words again, and Ben wasn’t helping them come any easier. She sat a squirmy and excited Sam back onto the ground. They were both quiet as they watched Sam leap and jump in a patch of untampered snow.

“Are you ready to go in? It’s freezing.”

“Mia, I’m sorry I didn’t tell you about the baby.”

They’d each spoken at exactly the same time. Mia bit her lip. “I can see why you didn’t, I guess. Would you have? Eventually.”

“Yeah, definitely. I was trying to find the right time.”

She nodded, conscious of her beating heart and the deep breaths she was taking. “I forgive you. Today’s a day for forgiveness, it seems.”

He shifted Turbo’s leash from one hand to the other. “About the other night…do you remember what you meant by ‘Et tu, Brute’? You texted that.”

Sam trotted off from them and up to the porch, snuggling against his mom, ready to go inside and get warm. Turbo looked off into the woods, not seeming to notice the cold.

Somehow, Mia knew if she told the truth, nothing was going to be the same. A tiny, nearly incoherent fear-filled voice inside her was screaming that she needed to stop this. But even if she couldn’t put it into words, she knew what she was doing. Suddenly her throat loosened, and the words spilled out. “The night Ollie was born, after the accident, you were there. You held my hand because Brad couldn’t. And not just that night. So many other times too. Sometimes I swear you’re the only person in the world who really sees me. When I figured out it was you Stacey was talking about in the letter, it wasn’t just that you knew and didn’t tell me, learning that made me doubt… I don’t know…everything.”

She could see the pain her words caused, and that more than anything was why she let herself step in and press her lips against his. He was four or five inches taller, but on the tips of her toes, she could just reach his lips. And just like before, she liked it. She liked everything about it.

She closed her bare, cold hands over the sides of his face and opened her mouth fully to his. He had strong lips, and she could feel the stubble from one day’s growth of beard against her skin.

He smelled like the Minnesota woods, cedar and pine, and he tasted like the s’mores they’d had in front of the fire. She could taste the sugar and chocolate on his lips and tongue. Her head began to swim, and she wondered if it was a flashback to drunkenly kissing him, or if she wasn’t breathing. Light-headed or not, she couldn’t pull away. She needed his kiss like she needed air, and he was going to have to be the one to stop it.

Only he didn’t. His hands slipped into her hair, and he lowered his face to hers so that she didn’t have to stand on her tiptoes. His tongue met hers, and he pulled closer as if he needed her the same way she needed him.

If he never pulled away, if he’d stand out here kissing her till they froze, Mia wouldn’t complain. Kissing Ben felt more than just good. It felt right. Like she’d been traveling a long time and had finally landed exactly where she should have been all along. It was as if she could feel broken pieces of herself mending together, halves becoming whole.

And somehow, even though she couldn’t explain it, she knew he felt the same way.