★ “An unusual portrait of what war does to families in general and children in particular . . . affirms the human need for art and beauty in hard times.” ―Booklist, starred review

“A provocative exploration of what resilience means when you’re pushed to the edge.” ―BCCB

“With pathos and a fine eye for historical detail, DeWoskin (Blind) relates the story of Shanghai’s Jewish refugees during WWII, when Shanghai was under Japanese occupation. DeWoskin captures the crushing destruction of war and occupation, the unfathomable resilience communities can muster through cross-cultural friendships and acts of kindness, and the power of the performing arts to foster hope in times of struggle and desperation.” —Publishers Weekly

“A provocative exploration of what resilience means when you’re pushed to the edge.” —Bulletin of the Center for Children’s Books

DeWoskin vividly captures this fraught time of dislocation and turmoil, and deftly connects the anguish of Jewish refugees and the agony of the Japanese occupation, elevating this beautiful novel into a clarion call for peace. —The National Book Review

“Rachel DeWoskin’s storytelling features an extraordinary combination of curiosity and kindness, on top of a belief that everyone can have an impact on the world they find themselves in. Someday We Will Fly is powerful, adventurous story of a teenager who confronts the brutal history with courage, love, and imagination. I could not put it down.” —Aleksandar Hemon, author of Nowhere Man and The Lazarus Project

“An engrossing and beautifully-rendered plunge into less-known Holocaust history, featuring the plight of Jewish World War II refugees in Japanese-occupied Shanghai.” —Julie Berry, Printz Honor-winning author of The Passion of Dolssa“Though I have written extensively about the Holocaust in novels, a picture book, poems, I had never before heard of the 23,000 Jews who fled to Shanghai for the duration of the war. Starvation, rough treatment by occupying Japanese troops, the teenagers turning to all kinds of difficult work (including gentlemen’s clubs as dancers and prostitution) to make money for their devastated families. Rampant disease, and early deaths were their daily lot. In Someday We Will Fly Rachel DeWoskin has taken the horrors and turned them into a YA novel that is terrifically moving and full of a kind of poetry in motion that is both terrifying and uplifting in equal measure.” —Jane Yolen, author of Mapping the Bones, The Stone Angel, Devil’s Arithmetic, Briar RoseFleeing Poland 1941, Lillia and her circus preforming family become split: her mother is left behind while the family travels to the last city that will take Jewish refugees: Shanghai. This unique view into a forgotten part of history is told with candid, yet lovely prose. While some aspects of the story are embellished, the book holds true to history. A great companion to Salt to the Sea. —Readers Books “Someday We Will Fly is an intense and immersive novel.” —TeenReads 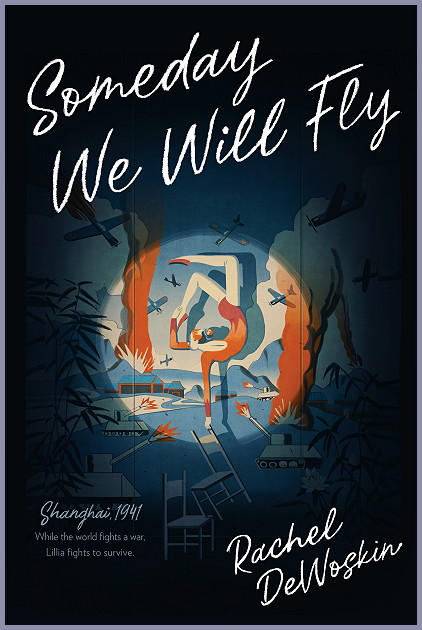 Warsaw, Poland. The year is 1940 and Lillia is 15 when her mother, Alenka, disappears and her father flees with Lillia and her younger sister, Naomi, to Shanghai, one of the few places that will accept Jews without visas. There they struggle to make a life; they have no money, there is little work, no decent place to live, a culture that doesn’t understand them. And always the worry about Alenka. How will she find them? Is she still alive?

Meanwhile Lillia is growing up, trying to care for Naomi, whose development is frighteningly slow, in part from malnourishment. Lillia finds an outlet for her artistic talent by making puppets, remembering the happy days in Warsaw when they were circus performers. She attends school sporadically, makes friends with Wei, a Chinese boy, and finds work as a performer at a “gentlemen’s club” without her father’s knowledge.

But meanwhile the conflict grows more intense as the Americans declare war and the Japanese force the Americans in Shanghai into camps. More bombing, more death. Can they survive, caught in the crossfire?

You can purchase Someday We Will Fly at the following Retailers: 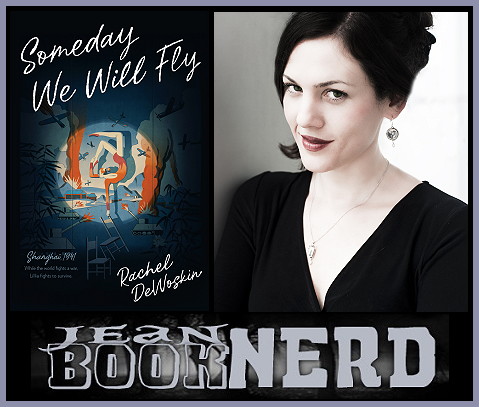 Rachel DeWoskin has spent much of her life in China, including childhood summers with her parents and brothers, excavating ancient Chinese musical and medical instruments for her dad’s research. Rachel lived in Bejing for most of her twenties, where she became the unlikely star of a Chinese soap opera called Foreign Babes in Bejing. She spent the last six summers in Shanghai, where she researched and wrote Someday We Will Fly.

Rachel lives in Chicago with her husband, playwright Zayd Dohrn, and their two daughters. She is on the fiction faculty of the University of Chicago and is an affiliated faculty member in Jewish studies and East Asian Studies.