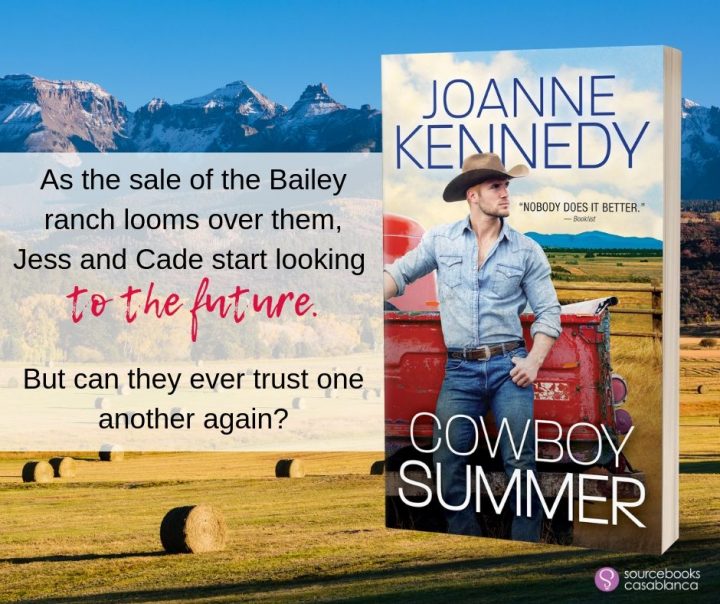 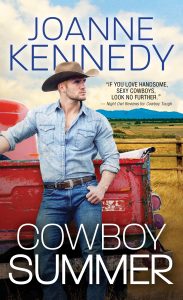 Jess Bailey broke Cade Walker’s heart when she left for the city—but she was just trying to find her own way in the world. When Jess’s dad calls her home and tells her he’s selling the ranch, she realizes she’s about to lose the life she was born to live. And when she sees Cade again, she knows how much she’s lost already.

As their nearest neighbor, Cade is always trying to help. But he’s got his own ranch and his horse training business to think about. Even though his heart fills with hope for a second chance when he sees Jess, she left him once when things got tough. And she knows he moved on without her.

As the sale of the Bailey ranch looms over them, Jess and Cade start looking to the future. But can they ever trust one another again?

What People are Saying about Cowboy Tough:

“Packs a powerful, emotional punch, and when it comes to capturing the appeal and feel of the West and its people, nobody does it better.”—Booklist

Joanne Kennedy is the RITA-nominated author of ten contemporary Western romance novels. The first book in her Decker Ranch Trilogy, How to Handle a Cowboy, was named one of Booklist’s “Best Romances of the Decade.” She lives near Cheyenne, Wyoming. Joanne loves to hear from readers and can be reached through her website, www.joannekennedybooks.com.

Stepping out of the car, Jess clutched her hair as the Wyoming wind slapped her upside the head, flinging grit that stung her skin. Some people might have gotten back in the car and hightailed it for someplace more hospitable, but Jess was a Wyoming girl, accustomed to winds so strong they often overturned semis on the interstate.

Gathering her curls in one hand, she shaded her eyes with the other and sipped a long, slow drink of home. All the empty places inside her filled with peace and pleasure, as if she’d downed a whole pitcher full of blue skies garnished with wildflowers and sunshine.

A friendly voice hailed her from a rusty flatbed parked by the barn. Painted letters on the driver’s door, nearly obscured by rust and flaking paint, read “Jeb Jo  son Hay  & Fe d.”

Jeb Johnson had been working with her dad since Jess was knee-high. Racing to the truck, she hopped on the running board and reached through the open window to drag his weathered face to hers and lay a smooch on his grizzled cheek.

He reached up and touched his face with shy reverence. “Oh, girlie, it’s good you’ve come home.” His eyes, normally bright with mischief, were glossy with—could that be tears? “They need you ‘round here. Cade…”

Jess didn’t want to talk about Cade. “I need them, too. My dad, I mean. And you.” Grabbing the steering wheel for support, she popped up on tiptoe and peered inside the cab. “Got snips?”

Since she’d been a little girl, Jeb had made a game of letting her choose which wire to cut. If she chose the right spot, the bales would tumble safely off the far side of the truck. Choose wrong, and they’d tumble all around her, bouncing to the ground like giant hairy hailstones. But she needed snips to play.

“Forgot ‘em at the last place.” He nodded toward the barn. “He went in to grab some.”

Heading for the barn, she hugged herself with glee. Her dad, stepping out of the dark tool room, would be blinded by the sunlight. She’d surprise him, all right.

Jeb called after her. “Now honey, I’m not sure…”

Shushing him, she pressed her back to the sun-warmed barn. The paint would rub off on her shorts, but a barn-red butt was a small price to pay for scaring her dad into one of his creative cussing streaks.

She heard the rasp of wood on wood, then bang—a drawer slammed shut. Tensing, she tightened her smile to restrain the laugh trapped high in her chest.

Footsteps hit the hollow floor, approaching the door. She counted.

With a crazed coyote howl, she leapt for the shadowy form in the doorway, knowing with giddy certainty her daddy would catch her, like he always did.

The wire cutters rattled to the ground, and a masculine grunt greeted the impact of her body.

She was caught, all right. The only trouble was, that wasn’t her father’s grunt. It wasn’t his body, either.

It was Cade Walker’s.

Momentarily blinded when he stepped out of the dim barn, he was shocked, even scared, when a howling bundle of womanhood slammed into his chest. He’d almost pushed Jess away—but then she’d kissed him.

It was a family kind of kiss, not a romantic one, and it landed on his cheek instead of the other body parts that would have been happy to host it. But it was still a kiss from Jess, and that made it electrifying. He caught the familiar scent of her—grass and flowers, summer sun and peaches—and his heart sailed away on an ocean of happy memories.

But the seas were choppy. She was fighting him like a cat in a bathtub.

He couldn’t. For one thing, he needed to look at her—just drink her in like a tonic that warmed his heart, plus a whole lot of other body parts. Jess wasn’t a classic beauty, being taller and stronger than most movie-star types. But with her wild blonde curls tumbling down her back, her blue eyes sparkling with energy, and her lithe, fit body warm and strong in his hands, she’d always been his feminine ideal.

She managed to wrench herself away, but he kept his grip on one firm thigh. The ground sloped steeply to the rocky drive, and she’d fall if he didn’t hang on.

Floundering for balance, she hopped madly down the slope.

“Let go,” she snarled, slapping his arm. “I thought you were my dad. Let me go!”

She always reminded him of some sort of wild critter. Usually, it was something sweet, like a rabbit or a deer. But there were times she was a cat—slinky, smooth, and lovely to look at, but all claws and teeth if you got too close.

This was one of those times, and he was apparently way too close.