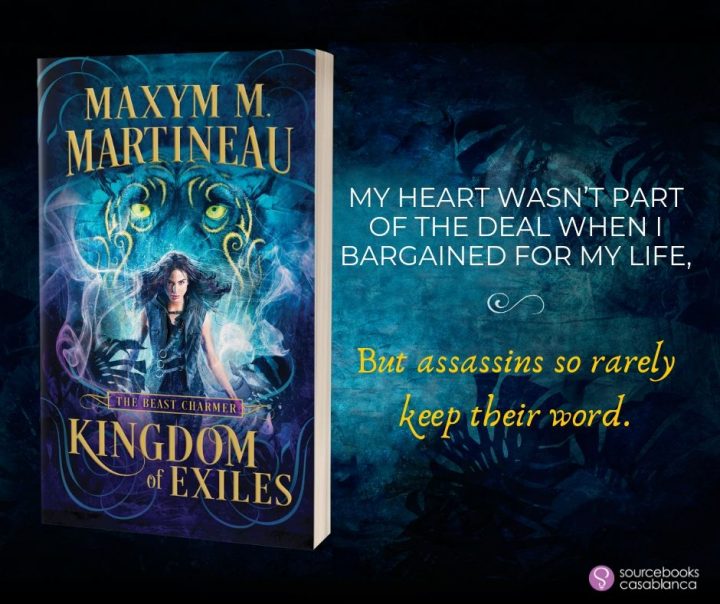 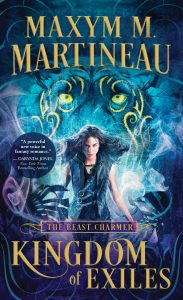 Assassin’s Creed meets Fantastic Beasts and Where to Find Them in this gripping, epic fantasy romance trilogy.
My heart wasn’t part of the deal when I bargained for my life,

But assassins so rarely keep their word.

Exiled Charmer Leena Edenfrell is running out of time. Empty pockets forced her to sell her beloved magical beasts—an offense punishable by death—and now there’s a price on her head. With the realm’s most talented murderer-for-hire nipping at her heels, Leena makes Noc an offer he can’t refuse: powerful mythical creatures in exchange for her life.

Plagued by a curse that kills everyone he loves, Noc agrees to Leena’s terms in hopes of finding a cure. Never mind that the dark magic binding the assassin’s oath will eventually force him to choose between Leena’s continued survival…and his own.

“Impressive debut…Martineau’s intricate world-building melds traditional high fantasy with a hint of Victorian sensibility, then elevates it with endearing characters and a deliciously complex story that will leave readers anxiously awaiting the second book.” D—Publishers Weekly, STARRED review and Best Book of Summer 2019

“A powerful new voice in fantasy romance, Martineau has crafted a stunning story full of razor-sharp intrigue, delicious characters, and a love story you never want to end. Keep an eye on Maxym M. Martineau. If I’m not mistaken, we have a bona fide genius in our midst.” —Darynda Jones, New York Times bestselling author

“Maxym Martineau weaves an irresistible blend of adventure, magic, and romance. A unique world full of danger and intrigue and a delightful ensemble of characters will leave fans of fantasy romance breathlessly awaiting more from this author. Prepare to be charmed!” —Amanda Bouchet, USA Today Bestselling Author

Maxym M. Martineau is an article and social media writer by day and a fantasy romance author by night. She earned her bachelor’s degree in English Literature from Arizona State University, and lives with her husband and fur babies in Arizona. Connect with her at MaxymMartineau.com or through Twitter and Instagram @maxymmckay.

Outstretched wings coated in vibrant teals and emeralds went taut, and [the Myad] tilted his nose upward to sniff the air. Built like an oversize black panther, the lithe jungle beast exhaled, shaking his mane from left to right. The peacock streak running the length of his spine and tail shimmered in the sun. A plume of feathers exploded around his head, standing tall between his ears. Gold casings masked his ankles and heels, protecting the weak points of his legs.

I’d never seen anything so beautiful. Powerful. I took a small step forward. The brush crunched beneath my feet, and the Myad skewered me with his blazing gold gaze. Thin tendrils of blue light streamed from his eyes.

Without further prompting, plates shifted along Grundy’s body, and two fat arms pushed outward. Once his soft hooves met the earth, a shallow divot appeared in a circle around the men. As one, they gasped, crashing to the ground under Grundy’s invisible weight. Calem sputtered, lungs working overtime to keep oxygen flowing through his body. Face flat against the earth, Oz groaned into the dirt. Muscles ticked along his back as he fought against the weight to no avail. Kost cursed and dug his fingers into the ground.

Noc alone managed to remain on his knees, palms pressed flat to the earth. Fissures of pressure cracked around his fingertips. Slate eyes lanced with frustration speared my heart, and a low snarl broke free from his lips.

Such power. I was wrong. The Myad wasn’t the most beautiful thing I’d ever seen. Noc would always win that contest.

A rumbling growl sounded from deep in the Myad’s belly, and heavy paws thudded against the banks of the pond as he stalked toward me. Fifteen minutes, and Grundy’s gravity manipulation would fade. I mouthed an apology to Noc before turning to the beast. Palms outward, I slowed to a stop a few feet in front of the creature. No weapons. No beasts. No threat. A cool sweat misted above my lips. To be in front of something so powerful…

The Myad’s tail flicked from left to right. Pulling back his muzzle to reveal a row of elongated teeth, he growled. I willed my breath to remain steady. Blue wisps began to stream from the gold plates in his legs. He’d take flight or pounce if I wasn’t careful.

Kicking on the charm, I knelt before him. Rosewood light spilled outward, but he didn’t blink. My heart traded places with my throat, and I swallowed twice before exhaling deeply.

Step one: Blood of the murderer. With my eyes locked on his, I extracted the vial from my breast pocket. Another growl simmered in the back of his throat, and I paused.

Easy now. My heart thundered in my ears. I popped the stopper off and poured Noc’s blood into my cupped hand. The Myad’s nose twitched, and he lowered his head to sniff the substance. Slowly, his scratchy tongue grazed my skin. Sheer power thrummed from his touch. I’m sure he tasted the raw flavor of Noc’s magic in the blood. The icy heat of it threatened to sear my skin, and the scent of burnt honey and hot metal tainted the air.

Once the beast licked my hand dry, he sat back on his haunches and studied me, the corded muscles of his legs rippling beneath black fur.

Step two: A token of loyalty. Proof that, if the taming were a success, I was as much his as he was mine. That we would never abandon each other. With bloody, shaking fingers, I took my opal ring off my hand.

“Your mother left this for you.” My aunt had held out a tiny box with silver clasps. My eager fingers had wrenched it open. There, lying in a bed of violet silk, was the rose-gold ring my father had given to my mother as a promise of his love. The one I now wore at all times.

This ring was my last tie to Hireath. My last tie to a memory that I cherished above all else. My parents had died trying to tame a beast beyond their capabilities. It seemed fitting that, if this didn’t work, I’d go out the same way.

Hot tears stung the corners of my eyes, and I bowed to the Myad, extending my palm toward him. Blue tendrils of vapor streamed from his eyes and looped through the ring, lifting it to the space before him. A crown of pure gold burst through his black fur. His feathered mane shot outward, and the tendrils carried the ring to the center of the headpiece. The gold rippled and molded, allowing for the jewelry to become part of his plumage.

Fighting back cries of joy, I tossed a quick glance over my shoulder to steal one more look at Noc. Eyes wide and jaw tight, he strained against Grundy’s pressure. Muscles bulged along his neck, and his fingers trembled. The detachment he’d wielded earlier was gone, and there was nothing but concern shining in his intense stare.

My heart twisted. Too bad it took me putting my life in danger for him to look at me like that.

Turning back to the Myad, I slowly undid the belt from my breeches. The Myad tilted his head, eyeing the black leather contraption. A low warning growl rumbled at the back of his throat.

It’s not a weapon. I promise. Folding my belt, I shoved it into my mouth between my teeth. Not a single sound. I breathed deeply and focused on the beast realm. My power flooded outward, pulsating to the cadence of my heart. The Myad stood before crouching low against the ground. Tension gathered in all his muscles, and he eyed my left shoulder. Screwing my eyes shut, I clenched down on my belt.

I heard the kick-up of dirt as he lunged. The back of my head smacked against the ground, forcing my eyes open, and a blinding heat surged from my shoulder as his fangs sank easily into flesh. The world slipped out from beneath me as pain blurred the lines of the trees and the sky, blending colors in ways that shouldn’t have been possible.