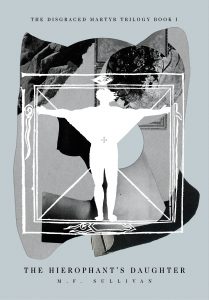 NOT FOR YOUNG ADULTS, THE FAINT OF HEART, OR THOSE WITH WEAK WILLS

Race through the bloodbath in this first volume of a horrific cyberpunk tahgmahr you can’t afford to miss. What would you sacrifice to survive?

By 4042 CE, the Hierophant and his Church have risen to political dominance with his cannibalistic army of genetically modified humans: martyrs. In an era when mankind’s intergenerational cold wars against their long-lived predators seem close to running hot, the Holy Family is poised on the verge of complete planetary control. It will take a miracle to save humanity from extinction.

It will also take a miracle to resurrect the wife of 331-year-old General Dominia di Mephitoli, who defects during martyr year 1997 AL in search of Lazarus, the one man rumored to bring life to the dead. With the Hierophant’s Project Black Sun looming over her head, she has little choice but to believe this Lazarus is really all her new friends say he is–assuming he exists at all–and that these companions of hers are really able to help her. From the foulmouthed Japanese prostitute with a few secrets of her own to the outright sapient dog who seems to judge every move, they don’t inspire a lot of confidence, but the General has to take the help she can get.

After all, Dominia is no ordinary martyr. She is THE HIEROPHANT’S DAUGHTER, and her Father won’t let her switch sides without a fight. Not when she still has so much to learn.

The fast-paced first entry of an epic cyberpunk trilogy, THE HIEROPHANT’S DAUGHTER is a horror/sci-fi adventure sure to disturb yet inspire adult readers of all stripes. Be sure to keep an eye out for THE GENERAL’S BRIDE, available on August 14th, 2019!

The Flight of the Governess

The Disgraced Governess of the United Front was blind in her right eye. Was that blood in the left, or was it damaged, too? The crash ringing in her ears kept her from thinking straight. Of course her left eye still worked: it worked well enough to prevent her from careening into the trees through which she plunged. Yet, for the tinted flecks of reality sometimes twinkling between crimson streaks, she could only imagine her total blindness with existential horror. Would the protein heal the damage? How severely was her left eye wounded? What about the one she knew to be blind—was it salvageable? Ichigawa could check, if she ever made it to the shore.

She couldn’t afford to think that way. It was a matter of “when,” not of “if.” She would never succumb. Neither could car accident, nor baying hounds, nor the Hierophant himself keep her from her goal. She had fourteen miles to the ship that would whisk her across the Pacific and deliver her to the relative safety of the Risen Sun. Then the Lazarene ceremony would be less than a week away. Cassandra’s diamond beat against her heart to pump it into double time, and with each double beat, she thought of her wife (smiling, laughing, weeping when she thought herself alone) and ran faster. A lucky thing the Governess wasn’t human! Though, had she remained human, she’d have died three centuries ago in some ghetto if she’d lived past twenty without becoming supper. Might have been the easier fate, or so she lamented each time her mind replayed the crash of the passenger-laden tanque at fifth gear against the side of their small car. How much she might have avoided!

Of course—then she never would have known Cassandra. That made all this a reasonable trade. Cold rain softened the black earth to the greedy consistency of clay, but her body served where her eyes failed. The darkness was normally no trouble, but now she squinted while she ran and, under sway of a dangerous adrenaline high, was side-swiped by more than one twisting branch. The old road that was her imme­diate goal, Highway 128, would lead her to the coast of her favorite Jurisdiction, but she now had to rediscover that golden path after the crash’s diversion. In an effort to evade her pursuers, she had torn into a pear orchard without thought of their canine companions. Not that the soldiers of the Americas kept companions like Europa’s nobles. These dogs were tools. Well-honed, organic death machines with a cultivated taste for living flesh, whether martyr or human. The dogs understood something that most had forgotten: the difference between the two was untenable. Martyrs could tell themselves they were superior for an eter­nity, but it wouldn’t change the fact that the so-called master race and the humans they consumed were the same species.

That was not why Cassandra had died, but it hadn’t contributed to their marital bliss. And now, knowing what she did of the Hierophant’s intentions—thinking, always, what Cassandra would have said—the Governess pretended she was driven by that ghost, and not by her own hopelessness. Without the self-delusion, she was a victim to a great many ugly thoughts, foremost among them being: Was the fear of life after her wife’s death worth such disgrace? A death sentence? Few appreciated what little difference there was between human and martyr, and fewer cared, because caring was fatal. But she was a part of the Holy Family. Shouldn’t that have been all that mattered? Stunning how, after three centuries, she deserved to be treated no better than a human. Then again, there was nothing quite like resignation from one’s post to fall in her Father’s estimate. Partly, he was upset by her poor timing—she did stand him up at some stupid press event, but only because she hoped it would keep everybody occupied while she got away. In that moment, she couldn’t even remember what it was. Dedicating a bridge? Probably. Her poor head, what did the nature of the event matter when she was close to death?

That lapse in social graces was not the reason for this hunt. He understood that more lay behind her resignation than a keening for country life. Even before he called her while she and the others took the tanque to the coast, he must have known. Just like he must have known the crash was seconds from happening while he chatted away, and that the humans in her company, already nervous to be within a foot of the fleeing Governess, were doomed.

Of the many people remaining on Earth, those lumped into the group of “human” were at constant risk of death, mutilation, or—far worse—unwilling martyrdom. This meant those humans lucky enough to avoid city-living segregation went to great lengths to keep their private properties secure. Not only houses but stables. The Disgraced Governess found this to be true of the stables into which she might have stumbled and electrocuted herself were it not for the bug zaps of rain against the threshold’s surface. Her mind made an instinctive turn toward prayer for the friendliness of the humans in the nearby farmhouse—an operation she was quick to abort. In those seconds (minutes?) since the crash, she’d succeeded in reconstructing the tinted windows of the tanque and a glimpse of silver ram’s horns: the Lamb lurked close enough to hear her like she spoke into his ear. It was too much to ask that he be on her side tonight.

Granted, the dogs of the Lamb were far closer, and far more decisive about where their loyalties stood. One hound sank its teeth into her ankle, and she, crying out, kicked the beast into its closest partner with a crunch. Slower dogs snarled outrage in the distance while the Disgraced Governess ran to the farmhouse caught in her left periphery. The prudent owners, to her frustration, shuttered their windows at night. Nevertheless, she smashed her fist against the one part of the house that protruded: the doorbell required by the Hierophant’s “fair play” dictatum allowing the use of electronic barriers. As the humans inside stumbled out of bed in response to her buzzing, the Disgraced Governess unholstered her antique revolver and unloaded two rounds into the recovered canines before they were upon her. The discharge wasn’t a tip-off she wanted to give to the Lamb and her other pursuers, but it hastened the response of the sleeping farmers as the intercom crackled to life.

“Who is it?” A woman’s voice, quivering with an edge of panic.

“My name is Dominia di Mephitoli: I’m the former Governess of the United Front, and I need to borrow a horse. Please. Don’t let me in. Just drop the threshold on your stables.”

“Yes, yes, please. I need a horse now.” Another dog careened around the corner and leapt over the bodies of his comrades with such grace that she wasted her third round in the corpses. Two more put it down as she shouted into the receiver. “I can’t transfer you any credits because they’ve frozen my Halcyon account, but I’ll leave you twenty pieces of silver if you drop the threshold and loan me a horse. You can reclaim it at the docks off Bay Street, in the township of Sienna. Please! He’ll kill me.”

“And he’ll be sure to kill us for helping you.”

“Tell him I threatened you. Tell him I tricked you! Anything. Just help me get away!”

“He’ll never believe what we say. He’ll kill me, my husband, our children. We can’t.” 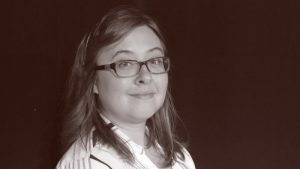 2 winners will receive a Painted Blind Publishing/Holy Martyr Church logo t-shirt, US Only.

5 winners will receive an ARC of THE HEIROPHANT’S DAUGHTER, US Only.

Painted Blind Publishing’s Twitch will be doing a tarot reading/book reading/giveaway on May 20th, 2019, one day after the book’s release. The Twitch.tv account is https://www.twitch.tv/paintedblindpublishing