The publisher Publisher of the media / book has provided me with a review copy at no cost. Opinions are my own. Break the Bodies, Haunt the Bones by Micah Dean Hicks
ISBN: 1328566455
Published by John Joseph Adams/Houghton Mifflin Harcourt on February 5, 2019
Genres: Gothic, Horror
Pages: 304
Format: ARC
Source: Publisher
Goodreads

Praise for BREAK THE BODIES, HAUNT THE BONES

“A tour-de-force of the imagination. Hicks has created a world that is beautifully and brutally surreal and yet, at the same time, BREAK THE BODIES, HAUNT THE BONES stands as a hyper-realistic psychological portrait of the death of the American factory town. My own identity as an American was disturbed and changed by this novel; some dormant understanding was shaken awake. This is a stunning and profound debut.” ―Julianna Baggott, bestselling author of New York Times Notable Book Pure

“I can’t stop thinking about this book. It’s a haunting story that burrows under your skin like an insect laying eggs that hatch within you in the middle of the night. Hicks’ mesmerizing imagery kept me turning the pages and asking myself ‘How is this book happening? What sort of literary witchcraft am I witnessing?’” ―Maurice Broaddus, author of Buffalo Soldier and The Usual Suspects

“BREAK THE BODIES, HAUNT THE BONES is a breathless wonder of a debut novel… Hicks is a magician with words and has written a spellbinding, haunting and necessary book.” ―Anne Valente, author of Our Hearts Will Burn Us Down

“Hicks has crafted a haunting story with multi-generational appeal, where the very real horror of poverty meets supernatural horror, and social issues like xenophobia, racism and economic anxiety are addressed organically through allegory and gripping storytelling.” ―Chris L. Terry, author of Black Card and Zero Fade 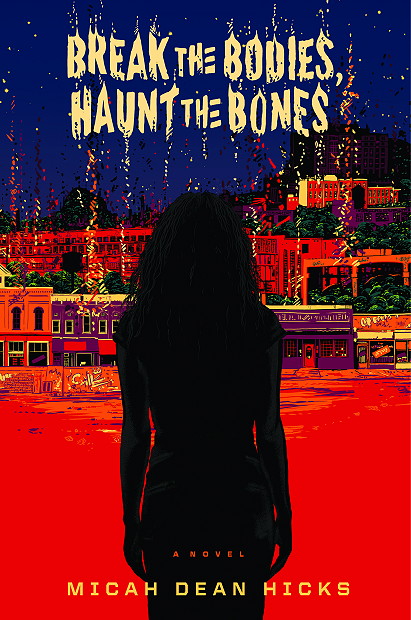 Swine Hill was full of the dead. Their ghosts were thickest near the abandoned downtown, where so many of the town’s hopes had died generation by generation. They lingered in the places that mattered to them, and people avoided those streets, locked those doors, stopped going into those rooms . . . They could hurt you. Worse, they could change you.

Jane is haunted. Since she was a child, she has carried a ghost girl that feeds on the secrets and fears of everyone around her, whispering to Jane what they are thinking and feeling, even when she doesn’t want to know. Henry, Jane’s brother, is ridden by a genius ghost that forces him to build strange and dangerous machines. Their mother is possessed by a lonely spirit that burns anyone she touches. In Swine Hill, a place of defeat and depletion, there are more dead than living.

When new arrivals begin scoring precious jobs at the last factory in town, both the living and the dead are furious. This insult on the end of a long economic decline sparks a conflagration. Buffeted by rage on all sides, Jane must find a way to save her haunted family and escape the town before it kills them.

You can purchase Break the Bodies, Haunt the Bones at the following Retailers:

My Thoughts:
I haven’t read a Gothic in ages but this book reminded me what I am missing. The story takes place in Swine Town where the citizens are regularly ghosted and in a surreal way, they become part of everyday life.  Everything in this story can be taken more than one way and is a comment on the social situation of life today where greed rules and the greedy make the rules.  Henry and his ghost invent things and their latest creation is a pig person which symbolizes so much these days.  I can’t help but think that this reminds me of Animal Farm so much.  The pig people are actually self-destructive and will end their own lives so humans aren’t needed to make the product.
Then there is Jane, who can predict things and tries to keep her brother Henry with the help of the ghost that possesses her and can read minds.  Again, I was reminded a bit of a Twilight Zone episode.  This story would be perfect for that series.  As Jane realizes that she must save Henry before the townspeople get to him and destroy him.  This has been one of my favorite reads this year even though it is quite unsettling.  I am amazed that this story captures the current undertones of race and class so perfectly. 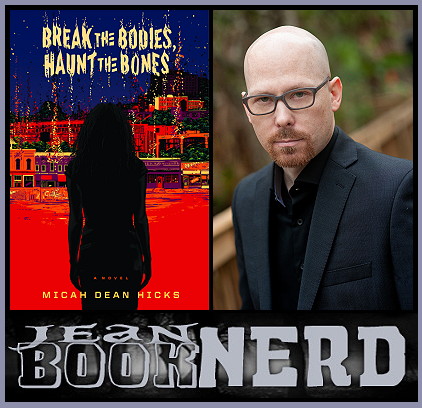 Micah Dean Hicks is the author of the novel Break the Bodies, Haunt the Bones. He is also the author of Electricity and Other Dreams, a collection of dark fairy tales and bizarre fables. His writing has appeared in The New York Times, The Kenyon Review, and elsewhere. Hicks grew up in rural southwest Arkansas and now lives in Orlando. He teaches creative writing at the University of Central Florida.

A teal lamp my wife bought me, glasses wipes, a tube of lip balm because my lips are always chapped, and a notebook for writing down any weird ideas I get in the middle of the night (usually things like, “What if rabbits?”).

There are so many!

Definitely Ann Leckie. I was feeling really burnt out after finishing my PhD and having a hard time enjoying books again. Then I started an audiobook version of her novel Ancillary Justice on a trip, and I just couldn’t stop reading. Her book is told from the point of view of a sentient warship that controls the modified bodies of the dead, corpse soldiers called ancillaries. It’s fantastic.

Marjorie Liu and Sana Takeda’s fantasy comics series Monstress has the most unbelievably rich, complicated, and original setting in any fantasy series I have ever read. The art is jaw-dropping. I love the characters. I can’t recommend it enough.

Also, Lauren Groff is the writer I most often assign to my fiction students. She’s just a master at telling stories. I love how big and ambitious her work is in Delicate Edible Birds. She manages to pack as much into a short story as most people can fit in a novel. And her stories move me in a way that almost nothing else does.

I still end up changing things as I’m drafting. And when I revise, I’ll make a new outline and might drastically change the major plot points. But having that roadmap at the beginning makes things much easier for me.

I love natural imagery, the kind that evokes danger, inhumanity, and magic. Winter-dark forests with their frost-caked leaves. Sleet hissing down on snarls of grass. The black sky breathing over a hilltop tree. I love “brackish,” “murk,” and “briars.” I love “hollow” in all its definitions. Tonight, the word I love is “winter.”

Here’s a picture of his majesty Raffy, the gumdrop prince of the candy cane forest. 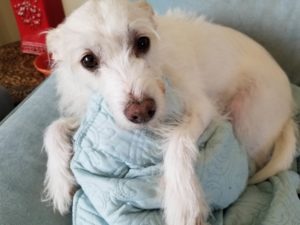 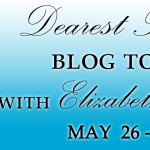 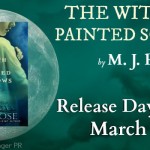 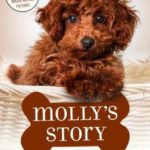