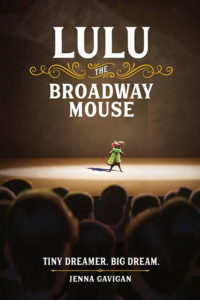 Lulu is a little girl with a very big dream: she wants to be on Broadway. She wants it more than anything in the world. As it happens, she lives in Broadway‘s Shubert Theatre; so achieving her dream shouldn’t be too tricky, right? Wrong. Because the thing about Lulu? She’s a little girl mouse.

When a human girl named Jayne joins the cast of the show at the Shubert as an understudy, Lulu becomes Jayne’s guide through the world of her theatre and its wonderfully kooky cast and crew. Together, Jayne and Lulu learn that sometimes dreams turn out differently than we imagined; sometimes they come with terms and conditions (aka the company mean girl, Amanda). But sometimes, just when we’ve given up all hope, bigger and better dreams than we’d ever thought could come true, do.

Praise for LULU THE BROADWAY MOUSE

“Preteens who are star-struck for Broadway will enjoy the drama.” ―Kirkus Reviews

“Jenna Gavigan is a true Broadway baby whose backstage debut novel will delight theater kids of all ages (and species)!” ―Tim Federle, author of Better Nate than Ever

“A standing ovation for Lulu! This delightful debut serves up a sweet and sassy mouse‘s-eye view of life in the footlights from a real Broadway insider. Encore, please?” ―Heather Vogel Frederick, author of the Spy Mice, the Mother-Daughter Book Club, and the Pumpkin Falls Mystery series

“Jenna manages to capture the drama and tension and excitement of the theatre without ever losing the magic and joy of what it feels like to be on Broadway. Lulu‘s burning desire to be onstage was exactly how I felt when I was younger, and reading this book reawakened that feeling in me!” ―Tony nominee Jonathan Groff 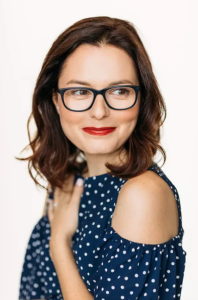 Jenna Gavigan, a fourth generation New Yorker, grew up dreaming of Broadway. At age sixteen she made her Broadway debut in Gypsy, opposite Bernadette Peters. Since then she’s appeared in a half-dozen films, on more than a dozen television shows, and on east and west coast stages, most recently Off-Broadway in the world premiere of Straight. Jenna graduated from Columbia University with a BA in Creative Writing, where she focused on fiction, television, and screenwriting. She lives in a teeny tiny Manhattan apartment with her husband, Kevin. This is her first novel. 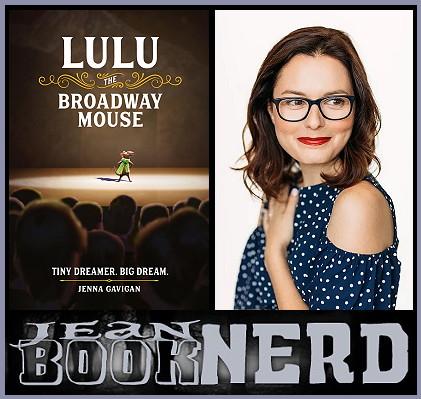 –  5 Winners will receive a Copy of LULU THE BROADWAY MOUSE by Jenna Gavigan.