The Honest Warrior by Daniel Banner

Baron Luzader, former Navy SEAL, never liked to talk … until he was forced to do it as part of his post-service therapy. Now, he finds his free tongue gets him in trouble more often than not, especially when he’s assigned to work a surveillance mission with a brilliant, beautiful woman. Eight years in Special Ops didn’t prepare him for Nessa.

Nessa Dimmick finally has a chance to prove herself in her field of Information Management. The biggest perk of the new job turns out to be her hunky partner, a former Navy SEAL with a great smile and no filter on what he says. Baron is different than anyone she’s ever worked with and his constant stream-of-consciousness compliments keep her blushing. She’s new to this whole partner thing, however, and they both have to figure out that trust goes both ways.

When their surveillance takes them across the Mexico border, Nessa wants to prove herself in the unfamiliar environment and gets in over her head. If she can’t learn to trust Baron, her actions could put the two of them and their relationship in danger.

Get your copy on AMAZON

Read for FREE on Kindle Unlimited

For the next while, Baron looked forward to being alone, and if he wasn’t alone, then he’d be spending time with his former SEAL brothers. With them he’d be back where life was comfortable.

Sutton pushed a button on the earpiece and said, “Early as well. Show her in.” Speaking to Baron, he said, “Looks as if you won’t have to wait long.”

“What? Huh? You didn’t say anything about—” He cut himself off and took a breath. Maybe Her had to do with the briefing for the mission. Or maybe Her would be his contact point. Or maybe—best case scenario—Her had nothing to do with Baron whatsoever.

Two sets of footsteps grew louder as Baron sweated over whatever was coming. He’d been in worse situations. Once he had a chance to gather all the applicable intell, he’d process it, and proceed from there. Adapt and overcome.

Whatever, or whoever walked through that door couldn’t be as horrible as …

A gorgeous brunette stepped into the room. Her intelligent eyes were wide behind cat-eye glasses as she ogled all of the computer equipment. That must have been how Baron had looked, just not so dang … pretty. Wow. No makeup, which she didn’t need. No fancy hairdo, just a simple ponytail. And plain clothes, farm professional just like Sutton had told Baron to wear.

“Hold on a sec,” said Baron, looking down at his own Carhartt pants and nice plaid button-up shirt. “Why are we dressed the same? I was planning on working alone, not with a civvy. This is starting to feel like a bad cop show.” He hoped he was overreacting and that the sweat beading on his brow turned out to be a false alarm. If this woman was from the produce importer who Baron would be doing surveillance on, it made sense that he had been told to dress in a manner to mimic what people in the industry would wear. Maybe they didn’t have to work closely together and were just being brought together for a consult.

Under other circumstances, Baron wouldn’t mind spending time with her. He had a weakness for smart women, and somehow he could tell this one was brilliant. Brains and beauty in one package. If he wasn’t still trying to fit into the real world after eight years as a SEAL, he might try to work up the courage to ask her out.

“Please, have a seat.” Sutton motioned to both chairs.

Baron looked around, realizing he’d stood when the woman had entered. Her eyes were no longer on the room, but on him, and she was definitely wary. Her smile was faint now, and the way her head was pulled ever so slightly away from him, let him know she might have taken his comment as an attack.

“Baron?” she asked. “No wonder you can’t be bothered to work with a commoner. Do I need to call you Highness or something like that?”

“Dang,” he said. “You are feeling attacked.” That hadn’t been his intent at all. For his own mental health, he didn’t plan on changing his habit of talking too much anytime soon, but working with a beautiful woman, he might have to steer his comments in ways that wouldn’t be taken wrong. “Baron’s my name,” he said, adding a grin. “However, if you prefer formal, the proper address for a baron is ‘Lord’”.

She relaxed and smiled back at him.

“I suggest familiar, rather than formal,” said Sutton. “Since you lot will be spending every day together for the foreseeable future.”

“What? No!” Baron shot from his chair again. “Being alone with a beautiful woman was not what I signed up for.”

“What you signed up for?” asked Sutton, this time not hiding his amusement.

Nessa’s mouth was hanging open until she spoke. “You don’t want a cheesy cop show job, yet you’re sticking to the ‘I work alone’ role? Talk about cliché.”

“It’s not that,” said Baron, settling into his seat.

“Let me guess,” she said. He noticed her nostrils were slightly flared and her face had a red tinge. It didn’t hurt her good looks in the slightest. “You didn’t sign up to work with a woman. Navy SEALs don’t have women in their ranks, so every woman must be below your superior standards.”

She knew more about him than he did about her, and that made him tentative. With less intell than the enemy, he was at a disadvantage and had to proceed cautiously. “That’s … not what I meant either. For the past six months I’ve been the linchpin between a dozen different entities dividing and transferring a family business. Before that I was a soldier, always taking orders, always working with a team. Is it wrong to crave one solo mission at some point in my life?”

“It’s not wrong,” said Nessa, “but you might want to try filtering your thoughts once in a while before vomiting them out into the world.”

Sutton was enjoying himself far too much, leaning back in his chair and observing the verbal tennis match. It occurred to Baron that he’d been kept in the dark about Nessa on purpose. This was a test. Sutton wanted to know how well Baron would roll with a change in plans, to find out if he would adapt and overcome. It would take more than some pretty, exasperating partner to ruin this opportunity for him.

Pulling the curtain down on his face over his emotions, Baron said, “What’s the mission, boss?”

Sutton became all business as well. “Miss Dimmick is one of the brightest new stars in the field of information management.”

“Oh, Miss Dimmick is it?” asked Baron, trying to get past the confrontation to a fun banter. “So we’re back to formal.”

“Actually, Lord Luzader, since we’re being formal, it’s Doctor Dimmick.” She winked at him. “But unlike your title, I actually earned mine.”

She had him there. Of all the frustrating situations Baron had imagined in Sutton Smith’s Warrior Project, Doctor Nessa Dimmick had not been anywhere on his radar.

This book is great! The chemistry between the two main characters jumps off the page. You will love laughing with them and falling in love with them. There is also some suspense in this sweet romance. ~Sue Stinnett

This is a refreshing and heartwarming romance with charming and unique characters that draw you in from the very beginning. ~Goodreads Review

Daniel Banner, a 15-year fireman and paramedic, collects experiences by day and makes up stories by nights, and sometimes vice versa. For Daniel, writing is an escape from the traumatic days, and a celebration of the triumphant days. 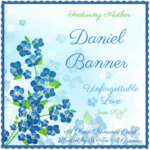