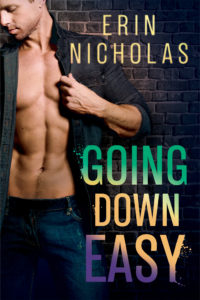 As far as flings go, single dad Gabe Trahan is pretty sure that Addison Sloan is his best bet. Once a month, Addison comes to New Orleans and then…It. Is. On. Until Addison returns to New York, it’s just hot, happily-no-strings-attached sex. And beignets. And jazz. But lately for Gabe, it isn’t nearly enough.

Sure, maybe Addison’s gotten a bit hooked on Gabe. After all, who can resist a guy who’s so sexy, so charming, and so…available? But maybe he’s too available for her right now. Addison’s just moved to New Orleans, and relationships are definitely off the table. Besides, guys always bail when they learn her secret: she’s a single mom.

Only Gabe’s not running. Worse, he’s thrilled. But Addison never signed up for ever-after romance, and Gabe won’t settle for anything less. Now it’s a battle of wills—and when it comes to the woman he’s falling for, Gabe isn’t above playing a little dirty.

“Okay, what else?” Corey asked the group. “Anyone have anything they want to talk about?”

Gabe shifted forward on his chair, resting his forearms on his thighs. “I do.”

Everyone immediately focused on him, and Addison almost rolled her eyes. It was very obvious that everyone here loved Gabe.

“Well, as you know, there’s this woman I’ve been seeing.”

What? Addison felt her stomach flip. He was going to talk about her? Right now? In front of her? And “as you know” indicated he’d already talked about her with this group. Oh boy. She bit her bottom lip and vowed to just stay quiet and not react to whatever was about to come. But this was low. Really low.

They even knew where she was from? Addison tried to remember if she’d mentioned where she’d moved from when she’d introduced herself.

“You always light up when you talk about her,” Bea said with a smile. “I know you really like her. Are things going well?”

If Gabe had scripted this and given these people exactly the right words to say to hit Addison directly in the chest, those would have been them. He’d not only talked about her but lit up when he did? They could tell he really liked her? Sure, that was going to be easy to ignore. Clearly, Addison needed to stop coming to this parenting group immediately.

He hadn’t looked directly at her yet, and Addison was grateful for that.

Gabe gave her a smile that was sincerely affectionate, and Addison had to swallow hard. He was such a great guy. Dammit.

“Well, it’s kind of a problem, actually,” Gabe told her.

“Come on, don’t be that guy,” Austin said. “Just let it get serious. Give it a try. What’s the worst that can happen?”

Caleb and Corey both nodded their agreement.

Addison frowned. She wasn’t commitment phobic, if that’s what he was insinuating. Which, of course, he was. She was just having-another-kid phobic. Okay, so maybe that was a little commitment phobic.

Caleb gave a short laugh. “Dude, you are commitment phobic. That’s not an assumption.”

Her heart fluttering, Addison looked back at Gabe to find him staring right at her.

“Well, good for you,” Roxanne said. “So what’s the problem?”

“Her,” he said, still looking at Addison. “She’s intimidated by the fact that I have a kid.”

“She’s not intimidated,” Addison blurted out. Then realized that she’d just made a potentially huge mistake. She glanced around. “I mean, are you sure that’s what she’s feeling? Is that what she said?” Because it was definitely not what she’d said. “You’re assuming she’s scared of the idea of a kid, but maybe that’s not really it.” She would not label her feelings as scared, exactly. Exhausted, stressed, and overwhelmed were much better descriptors.

“Okay, maybe that’s not the right word,” Gabe conceded. “But she broke things off when she found out about Cooper.”

“Well, honey, Cooper is a part of your life, and if she feels that way, you’re better off,” Bea said gently.

Addison nodded. Yeah, he was better off without her. But damn, her chest suddenly felt tight.

“Maybe,” Gabe said with a slow nod. “I mean, I get that’s how it seems. But I can’t stop thinking about her.”

His eyes were on Addison’s again, and she was having trouble swallowing.

“I want to be with her. And I just want her to give Cooper a chance.”

“Maybe you’re taking it too personally,” Addison said, again before thinking about the fact that she should just stop talking.

Gabe sat up straight, his expression one of disbelief. “I’m taking it too personally that the
woman I’ve been dating—”

“You’ve seen her once a month for six months. That’s like, what, twelve days?” Addison interrupted. “You consider that dating?”

Everyone else stayed quiet. Addison didn’t look around to see their expressions—because she couldn’t stop looking at Gabe. And, interestingly, at the moment she didn’t care what everyone else thought of this.

“We’ve spent a lot of time in bed,” Gabe said, his gaze intense. “A lot of time. But we’ve also gone out and had fun and laughed and talked. If it had only been sex, I might have agreed with you. But it was more than that.”

He emphasized the word more, and Addison felt the butterflies take another swoop around her stomach. She cleared her throat. “But if she didn’t even know about Cooper until recently, how much did you really talk? How much do you really know about her?”

“I was thinking about that, actually,” he said. “About how we didn’t share a lot of personal details. But the thing is—I do know her. She’s super organized. She always has wet wipes and lip balm and pens and Band-Aids and stuff in her purse. But she also loves to be surprised. When I tell her I thought of a new place to take her and won’t give her any details until we get there, she gets this look in her eyes that makes me want to give her surprises every day forever. It’s like she has to be so on top of things and organized all the time that when she has the chance to let someone else come up with a plan, she’s all in.”

Addison felt the air whoosh out of her lungs, and she stared at him. Because that was exactly how she felt when she was with him.

“But she loves to surprise me, too,” he went on. “Sometimes it’s with sexy lingerie or edible body lotion.”

His eyes heated, and Addison could feel it even across the few feet that separated them. Her body responded to it, too. As always. In spite of the group of people gathered around them.

“But sometimes it’s with food from New York that she knows I’ve never had, or an I LOVE NY shirt just because it made her laugh to think of me wearing it, or it’s by getting up and singing karaoke in a bar we happen to be passing.”

Addison knew she shouldn’t be staring at him. If anyone in the group was even the least bit insightful, they would be able to figure out that there was something going on with Gabe and her. But she couldn’t look away.

“And I think she likes doing all of that because she doesn’t feel like she can be spontaneous in her regular life. She has to be on and prepared and in charge all the time. But with me, she can let down a little bit, and she’s discovered how fun it can be to make another person smile just for the sake of making them smile. Because you care about them. Because, yeah, the edible body lotion might just seem like it’s about sex, but it happened to be my favorite flavor. Which she discovered by spending time with me outside of the bedroom. And the karaoke might just seem like a fun thing to do on a whim, but she chose my favorite song, which she knew because I told her in passing when we heard it on the radio. But she remembered. And it was almost like she wanted me to think of her when I hear it now.”

New York Times and USA Today bestselling author Erin Nicholas has been writing romances almost as long as she’s been reading them. To date, she’s written over thirty sexy, contemporary novels that have been described as “toe-curling,” “enchanting,” “steamy,” and “fun.” She adores reluctant heroes, imperfect heroines, and happily ever afters. 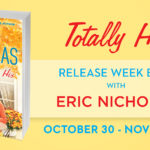