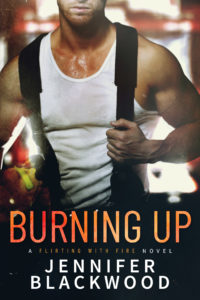 Title: Burning Up
Author: Jennifer Blackwood
Release Date: May 8, 2018
Publisher: Montlake Romance
Series: Flirting with Fire, #1
Summary
Unemployed schoolteacher Erin Jenkins is back in Portland, the town she hasn’t called home for more than a decade. It’s not the way she wants to spend her last days of summer: in between jobs and avoiding her mother’s snooping by escaping to the ice-cream aisle. But when the opportunity arises for her to accompany her brother’s best friend—her lifetime crush—to a wedding, summer gets a whole lot more interesting.
Firefighter and single dad Jake Bennett has built a nice, safe wall around his heart—no romance, no getting burned. That doesn’t mean he’s ruling out a fling. Considering Erin’s visit is temporary, they’re the perfect fit for a scorching no-strings one-night stand. Or two. Or five. Until the worst thing happens: Erin and Jake are feeling more. Damn that four-letter word.
Now their hearts are on the line, and when their smoldering summer comes to a close, it’s going to be harder than ever to put out the fire.

Jake scanned the contents of the Intimidator, checking that all the equipment was put back in its proper place from A shift.

Simple tasks. He liked those. They droned out the storm that had been pouring down on his thoughts ever since he’d taken Erin out.

He checked the chart on the wall by the door to the rec room. All the meds used last shift had been replaced. He double-checked. Never could be too sure.

His mind started to slip back to Friday. The softness of Erin’s lips. He fumbled with a vial of insulin.

Three days later and he still hadn’t texted her back. Didn’t know if he should text her back. He didn’t like this, the whole overthinking thing. That was why he’d sworn off dating in the first place. It was just too damn confusing.

He glanced at the med box one last time, silently inventorying everything.

A hand clapped on his shoulder, and Jake gritted his teeth, trying not to lose count with his task.

“Missed you the other night for burgers. Where were you? And don’t give that lame excuse that you were busy. We all know you just sit at home and watch your Matlock, old man,” Hollywood said.

“That’s Murder, She Wrote to you. And no, I was out with a friend.” So he didn’t actually watch the show, but if Hollywood was going to treat him like an old man, he’d play it up. Even if he was only a few years older than him.

“Your friend. She happen to have the same last name as another one of our firefighters?”

That title—friend—sounded so wrong to Jake’s ears. Sure, they’d kissed. And talked. Hell, he’d done more talking in one night than he had in an entire month.

Keep yourself guarded. You have more than yourself to think about.

“Bring her over,” Hollywood said.

“To the lake this Friday.” He huffed out a laugh. Erin at the lake with his men? This screamed bad idea. “And subject her to your heathen ways? Not happening.”

“What? You nervous we’ll steal her away?”

“Nobody but you would be stupid enough to mess with Reece’s sister,” Hollywood said.

Right. Jake had apparently been whacked over the head with a stupid stick.

His gut told him this would end badly, and his gut hadn’t been wrong yet. And yet he couldn’t get Erin off his mind. “We’re just keeping it casual. It’s not like that.” If he said it enough times, it’d be true.

“Who are you talking about?” Reece strode in from the kitchen, stopping to lean against the doorframe to the garage.

“Don’t you see how he’s going all googly-eyed? Who do you think?”

Reece cut his glance to Jake. He’d majorly messed up the bro code by not running this by Reece first, but Jake hadn’t been using much of his head lately.

Jake cleared his throat. Damn. He really didn’t want to do this at work. It’d be much easier with a beer and a burger. “Erin.”

“My sister, Erin? Is that the one you’re referring to?”

“There’s a brownie in the kitchen with my name on it. I’ll just leave you two to work this out,” Hollywood said. He disappeared into the station, the metal door shutting with a loud clunk.

Reece put his hands up, stopping him. “You don’t need to explain anything to me. You’re a grown-ass man. It’s weird—I’ll admit that.”

“Always,” Reece said as he checked out the contents of the med kit, even though he’d just seen Jake do this. “Just remember she’s leaving.” He gave him a knowing look.

Yeah. Something that he knew but was choosing to ignore at the moment. 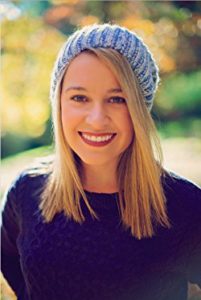 Author Biography
Jennifer Blackwood is the USA Today bestselling author of the Rule Breakers, Drexler University, and Snowpocalypse series. Aside from writing contemporary romance, Blackwood teaches English in Oregon, where she lives with her husband, son, and unruly black Lab puppy. When she isn’t writing or teaching, you can find her binge-watching some of her favorite TV shows, such as Supernatural and Gilmore Girls.
Social Media Links
Website: www.jenniferblackwood.com
Facebook: www.facebook.com/AuthorJenniferBlackwood
Twitter: http://twitter.com/jen_blackwood
Goodreads: https://www.goodreads.com/author/show/8532549.Jennifer_Blackwood