Love on a Limb by Laurie Lewis

Matthew Grayken is young, successful, and dying, which is why he’s about to propose to a total stranger. He isn’t interested in love. He needs a caregiver, a companion, and someone to be his legal voice when he can no longer speak for himself.

Lonely, compassionate nurse Mikaela Compton is intrigued by Matt Grayken’s tender request, but when their friendly marriage turns into love, she rejects the inevitability of Matt’s death and prays for a miracle instead.

Mikaela succeeds in reigniting Matt’s will to fight, but his body is losing the battle and he is suffering. She recognizes that her urgent need to save Matt has caused her to betray the fundamental promise she made him–to help him die peaceably.

Matt needs a miracle, and Mikaela believes one is attainable, but she will need to leave him at the hour of his greatest need. She’s about to learn that while love sometimes draws you close, it sometimes requires you to go out on a limb.

“All right, smarty-pants.” She leaned close to deliver what Matt assumed was another comic barrage, but as she drew near their eyes met and understanding passed between them. Understanding that, despite their efforts to make light of their situation, they were alone in a valley and the way out would require a hard, bloody crawl. He saw determination mixed with fear and pure love. It warmed him, as if the hands of her heart had reached into his chest to warm and calm his own trembling heart. Her face hovered near his, becoming almost iridescent from the emotion there. Her expression spoke a language of its own, one Matt translated before she uttered a sound.

“Your plan failed,” she whispered. “I know you already love me.”

Matt felt the skin of his face prickle as heat rose from deep within him. A sheen of sweat broke across his skin from the stop-and-go battle raging inside. He knew his face took on the same sleepy-eyed glow of unanswered want she showed. He leaned forward, closing the inches between them and whispered back. “I’m afraid you’re wrong, Mikaela. I’ve always loved you. From the first day I watched you walk through the clinic.” He closed his eyes. “But what does it get us?” He looked down at his bruised body and shook the papers about AHCC and cow shares. “Look at the fight we have ahead.”

Mikaela closed the distance and brushed her lips over his. His sensible side told him to push back, but he had no will to send her away again. His battered hands framed her face and pulled her mouth to his. He felt wholly alive for the first time in weeks, not a patient first, but filled with the thoughts and feelings of a man. Of a husband. He tried to raise his arms to wrap her close, but a sharp pain ended the effort as Mikaela pulled back an inch, her smile completely happy and her eyes joyfully bright.

“I love you, Matt.” The words were spoken in a whisper, so light and airy that they tickled his lips. “Just finally be mine. Give me these arms to hold on to. This shoulder to lay my head on. This mouth that speaks honesty to me and gives me kisses. These are enough until you’re well. Just knowing you love me is enough.”

“Not just great writing but spectacular. This is a book that I will keep in my library and cherish.”

“The characters in this book are written so well you can actually feel their emotions and can’t help getting swept away in their love story.”

“. . . completely unforgettable, heartwarming, and joyous. Have the tissues ready.”

“This book was extremely well written and has fast become one of my favorites of all time.”

Laurie (L.C.) Lewis knows that wherever life takes her, she will always be a Marylander at heart—a weather-whining lover of crabs, American history, and the sea. She admits to being craft-challenged, particularly lethal with a glue gun, and a devotee of sappy movies.

Laurie was honored to win the 2017 RONE Award for Inspirational Romance. She also has been an IndieBRAG Medallion Honoree, and a New Apple Literary Medallion winner. She has twice been named a Whitney Awards finalist, and a USA Best Books Award finalist. 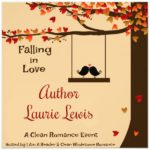 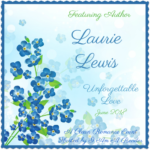