Will he pass the daddy test?

With his job in jeopardy, it couldn’t be a worse time for Sheriff Nate Landry’s recent past to come back to haunt him. But it would take an army to stop SWAT team leader Julie Smith. The fellow cop—and sister of his ex-fiancée—wants one thing from the beleaguered lawman: custody of the toddler son that Nate didn’t know he had.

He may not be natural daddy material, but he quickly takes a shine to little Duke. And then there are the feelings Nate’s been hiding for years. Only now Julie’s running for sheriff of Harmony Valley—against him. Time to retreat? Not if he wants a future with the woman he loves.

“Julie.” Nate shot to his feet, steady as always, guarded as always. If Nate was the sheriff, he was off-duty. He wore a brown-checkered shirt and blue jeans, not a service uniform.

Duke was balanced on her thighs, his small hard-soled sneakers digging in for purchase as he reached for Nate once more.

Couldn’t Duke loathe Nate as much as Julie did?

Couldn’t Nate look as if the past few years had been one big heartbreak?

No on both counts.

Duke’s fingers flexed as he reached for Nate.

And Nate? It was annoying how good he looked. His black hair might have been in need of a trim and his chin shadowed with stubble, but his teeth hadn’t fallen out, his broad shoulders weren’t bullet-ridden, and worst of all, he didn’t look sleep-deprived.

The mayor and town council were still on the pulpit surrounded by animated residents with loud voices. Chaos had arrived in Harmony Valley, just not the way Julie had envisioned it.

The man next to Nate came to his feet. He wore a wedding ring, held a swaddled newborn, had spit-up on the shoulder of his yellow polo, and New Dad bags under his eyes.

Julie gave him a sympathetic smile. Duke reviled naps and could be a restless sleeper at night. Not as restless as Julie lately, but still…

The man with the baby cleared his throat, shaking Nate out of tall, dark and stunned mode.

And there it was. That awkwardness Julie had been waiting years for.

She pounced. “I’m the sister of Nate’s ex-fiancée.”

Her moment had arrived. Julie stood, scooping Duke to her hip with her left arm. “Didn’t Nate tell you he was engaged? He left my sister at the altar.” That wasn’t all he’d left, but Julie didn’t want to waste all her ammunition on the first volley.

Flynn didn’t look as shocked as she’d hoped. She blamed Nate. He inspired loyalty wherever he went. Even after being dumped, April had forbidden Julie to confront him. But that ban had been lifted. It was open season on the sheriff.

Duke toppled forward, letting his full weight drop between Julie and Nate, unexpectedly shifting Julie’s center of gravity. She slurped in air like it came through a clogged milkshake straw. The stitches beneath her right collarbone pulled sharply, tugging at nerves that quivered up and down her neck and shoulder.

And too late to back out now.

“Ms. Curtis has created complex characters in Vince and Harley as well as creating fantastic secondary characters in the elderly residents of Harmony Valley. In each installment of this series, this reader enjoys “checking in” with them.” MarcieR, Amazon review

Melinda Curtis is an award-winning, USA Today Bestseller of over 40 romances. She writes sweet romance for Harlequin Heartwarming, sweet romantic comedies and sexy sports contemporary romances. When not working on DIY projects around their home, Melinda and her college sweetheart enjoy watching Duke mens basketball and visiting their three kids and one grandchild. Sign up for her mailing list to receive two free reads. 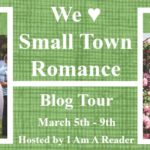