Decorated war hero Conall Stewart has spent ten years envisioning his return to his beloved Scottish Highlands. But now, with the days of battle finally behind him, it seems that his dreams of home have been in vain: the land of his youth lies in ruins, and his family is gone. Though he will never stop searching for his kin, Conall knows he must begin again. But when he takes on a rented farm in a nearby town, he finds far more than the fresh start he was looking for . . . After catching a mischievous local lad stealing, Conall returns young Jamie to his mother, Aileen Leslie—and finds the woman’s coddling of the child maddening. What Conall does not realize is that Aileen hides a frightening secret: her devoted protection of Jamie is all that shelters them from discovery by a dangerous man from their past. Drawn together by circumstance, Conall soon develops a fatherly relationship with Jamie—as well as romantic feelings for Aileen. But even as the couple accepts their growing affection for one another, time runs out for Aileen and her son: after years of hiding, they have been found. Conall lost his family once—he will do all in his power not to let history repeat itself . . ..

Jennifer Moore never disappoints. She’s one of my go-to authors. I order all her new books no matter what. This one was wonderful. I loved the setting, the characters, and the story.

Five full stars. This story was perfect. A Scottish small town, families trying to survive and reconnect after wars and displacement, a mother’s love for an adopted son, keeping a secret to protect loved ones, and the entrance into Leslie’s precarious life of a returning soldier who inspires hero worship (and a male role model) in Leslie’s son. Beautifully done. One of my new favorites by Jennifer Moore!

Aileen opened the door and drew back with a gasp. Sergeant Stewart stood at the threshold, one large hand holding Jamie by the arm. The child twisted trying to escape his grip.

“Good evening. Mrs. Leslie, I presume?” His voice was polite in spite of his angry expression. He inclined his head but did not loose his hold. “May I speak to your husband?”

“No, you may not.” Aileen’s hands tightened into fists. “And I’ll thank ye to release my son immediately, or I shall call for the constable.

What is the meaning of this, sir?”

Sergeant Stewart’s eyes widened for an instant, then his expression returned to a scowl. “Madam, perhaps ’tis I who should call the constable.” He glared down at Jamie. “I discovered this lad sneaking aboot my library.”

“Unhand him at once.”

The sergeant released his hold, and Jamie ran toward her. She clasped him in her arms. He appeared unharmed, only frightened.

Jamie shook his head and moved behind Aileen, burying his face against her skirts.

The sight of tears on his freckled cheeks made heat boil up inside her. She turned toward the man in the doorway. “Have ye no decency a’tall? Treatin’ a wee child like a criminal.” She jabbed a finger toward his face. “Yer library? And what would ye accuse him of then? Tievin’yer books?”

“Éist! Listen!” He held up a hand, stopping her rant.

Aileen hadn’t realized that, in her anger, she’d switched to speaking Gaelic until he answered in the same. Just as well. She considered it a far more suitable language for an argument.

Jennifer Moore is a passionate reader and writer of all things romance due to the need to balance the rest of her world that includes a perpetually traveling husband and four active sons, who create heaps of laundry that are anything but romantic. She suffers from an acute addiction to 18th and 19th century military history and literature. Jennifer has a B.A. in Linguistics from the University of Utah and is a Guitar Hero champion. She lives in northern Utah with her family, but most of the time wishes she was on board a frigate during the Age of Sail. 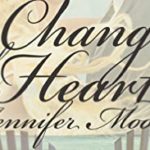