Today Elle Boon and Rockstar Book Tours are revealing the cover and an exclusive excerpt for DARK EMBRACE, her new paranormal romance which releases February 8, 2018! Check out the gorgeous cover and enter to win a $25 Amazon Gift Card! 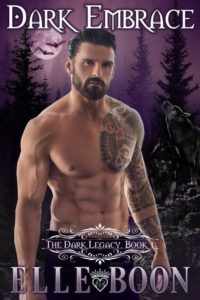 A DARK LEGACY where only the strong survive and those who are Goddess touched can complete the warriors who fight to protect the world from the creatures that go bump in the night.

Jennaveve, the Fey chosen by the Goddess to be the queen of her people for the past few millennium, is tired and wishes for a break, but hadn’t counted on being reduced to almost mortal thanks to a dark stranger. They say you should be careful what you wish for. The last time she’d taken a break, her Fey had left their realm, resulting in shifters on Earth known as the Mystic and Iron Wolves and even more she was still searching for.

Damien and Lucas Cordell knew they’d share a Hearts Love when the time came. As the twin sons of the Vampire King who’d mated a shifter, they were the first of their kind. When they’d thought their mate was finally within their reach and was a shifter like their mother only to realize she wasn’t theirs, they’d almost lost their lives to the alpha of the Iron Wolves, Kellen Styles. Instead, the error led them to the being that was…the Fey Queen Jennaveve. Only she was even more elusive than the wind.

Time and patience was something Damien and Lucas had in spades, until the female they’d already laid claim to, even if she hadn’t accepted them yet, was taken by an enemy. Saving Jenna became their one and only focus. As time and realms slip between them, their fear for her had them forgetting about patience and made claiming Jenna as their Hearts Love, hoping she accepted their Dark Embrace.

Will the Cordell Twins be able to rescue Jenna from the evil who has taken her? Will Jenna get her powers back? Who is the dark presence and how will they defeat a being who is strong enough to bring the Fey Queen down to her knees?
books2read.com/u/4NR0ez
Lyric’s Accidental Mate, Iron Wolves Book 1 is a crossover series with the first book being FREE http://amzn.to/1NOzmVF

Exclusive Excerpt!
They both turned as one toward the door as a commotion swirled into the room.

“What have you done?” Raina asked.

Lucas looked at the tall man who followed behind their sister, waiting to see what Creed, the son of Satan, had to say. Hellboy himself would be a good one to have on their side. “Shit, how’d you get in?” he asked as realization dawned.

Damien flashed to his sister. “Where did you come from?” He held her by the arms, giving her a little shake.

A deep rumble came from Creed. “Boy, I suggest you unhand my Eros, or I’ll remove your arms from your body.”

Lucas came to stand next to his brother. “Our Hearts Love is missing along with our father. We’ve been locked into this fucking castle and you two just strolled in like it’s nothing. We just want to know if you can get us out.” The last was yelled at a decibel that bordered on a roar, but Lucas was at the zero fucks giving point.

“You got two seconds before I start dismembering your brother. Tell him to get his fingers, palms, and any other body part off my Raina if he wants to keep them.” Creed’s voice had become the deep tone of his demon side.

“Damien, you might want to take a step back before we have to rumble with our brother-in-law in front of baby sis here. Raina, please answer the damn question while our brother is letting you go. Now, Damien, release her.” He put as much order behind the last part, hoping to reach his twin, but he’d never seen his twin’s eyes turn such a dark obsidian like their father’s.

Raina wrapped her arms around their brother, stilling Creed from going killer beast. “Damien, calm down. We popped in like we always do. I felt mama’s distress and told Creed I needed to visit. He of course insisted he come with. When we got here I couldn’t find her, so I followed you two morons’ scents. There’s another, not quite the same, but familiar smell here too.” Her voice shook, the slight tremor more an indication of her rising worry. She released Damien and went to the same corner. “It’s like dad but toned down.”

“Can you track him?” Damien asked.

“He took Jennaveve and our father went after him, alone. He’s our…brother,” Damien said in a barely there whisper.

Raina spun to face them, her hand going to her throat. “What?”

Creed flashed to her side. “She will not be your sniffing dog.”

“Our father has another son. Goddess, its messed up to even say that. He’s the one who hurt Jenna. He nearly killed her the last time he had his hands on her. Somehow that…bastard traced her back here and took her out from under our noses. Now, our father is tracking them alone while we stand here arguing. We can’t breach these walls, but you two can. You can sense him, Raina. Please.” Lucas held his hand out, holding the pillow with Jenna’s scent still on it.

“That’s why mother is hurting.” She moved forward, a tear slipping down her cheek. “Creed, I can’t stand here and do nothing when my family is falling apart.”

“Damn it, I knew this family stuff was going to be a pain in my ass.” Creed jerked the fabric out of Lucas’s hand. “It’s the Fey Queen. I can scent her as well. We go together, all of us on one condition.”

“I’m in charge and Raina is not to be harmed.”

“Hellboy, you can call all the shots as long as we find our Love.” There was nothing he wouldn’t agree to in order to find Jenna.

“I’m so going to regret this.” Creed dropped his chin to his chest.

Damien pointed at the two. “No making out with our sister in front of us. Save it for the bedroom. Let’s go people, times a wasting.” He changed into all black clothing, and although his words were teasing, the hardness behind the tone was anything but.

“Can I eat them?” Creed asked.

Raina shook her head. “You promised to be nice to my family.”

Their sister snorted. “No, you told her she couldn’t do that either. Come on, boys. Let’s get this party started.”

Lucas focused on Jenna’s sweet smile and promised himself they’d have her tucked between them soon. When he opened his eyes, his brother was staring with that same single minded intent on his face. “We’ll get her back and make sure she can’t escape without one of us always knowing where she’s at.”

Raina snorted. “You two will learn, a woman like Jenna won’t take to being caged or coddled.”

He met Creed’s dark stare. “How’s that working for you, Hellboy?”

Creed lifted his middle finger. “You still wanting a way out of here, or we gonna sling insults back and forth? Believe me, your little nickname is nothing compared to the things I’ve been through and trust me, boy, I’ve definitely had much bigger beings say much nastier things than that to me.”

Instant regret punched him in the gut. “Damn it, I’m sorry man. You’re right. Hellboy isn’t meant to be a…bad thing. Shit! I like you and I think you’re great for our sister.”

Damien groaned. “Son of a bitch, not you, too.”

Their sister clapped like she was proud to be part of the crazy, wrapping one arm around Creed and held the other out. He moved forward, slipping his hand in hers, waiting for Damien to grab onto his other one.

Once they formed a circle, Creed’s lips formed a straight line. “Here we go boys and my girl.”

Darkness came quickly. The opulent bedroom replaced by a forest that had gone eerily quiet. Creed moved next to Raina, waving his hand around her, changing the sexy dress she’d had on into all black, making her resemble a character from the movie Underworld. He didn’t have time to question the man as they all seemed to notice the unnatural quietness.

“Anyone know exactly where we are?” Damien’s voice echoed around them.

Creed closed his eyes, then opened them quickly. “We’re still on Earth. Something is unnatural here, but it’s not demon born.” 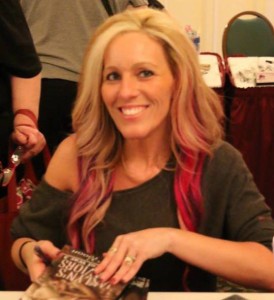 Elle Boon lives in Middle-Merica as she likes to say…with her husband, two kids, and a black lab who is more like a small pony. She’d never planned to be a writer, but when life threw her a curve, she swerved with it, since she’s athletically challenged. She’s known for saying “Bless Your Heart” and dropping lots of F-bombs, but she loves where this new journey has taken her.

Connect with Elle online, she loves to hear from you:

1 winner will receive a signed finished copy of DARK LOVERS & a $10 Gift Card to the book retailer of their choice, International.