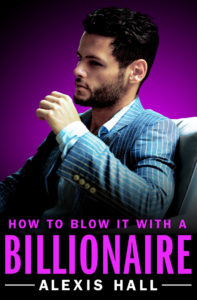 HOW TO BLOW IT WITH A BILLIONAIRE by Alexis Hall

Once upon a time there was a totally ordinary boy who fell for a cold, beautiful prince. Only it’s not a fairy tale, it’s my life. The prince is a billionairecalled Caspian Hart. And we’re trying super hard to live happily ever after.

Alexis Hall was born in the early 1980s and still thinks the 21st century is the future. To this day, he feels cheated that he lived through a fin de siècle but inexplicably failed to drink a single glass of absinthe, dance with a single courtesan, or stay in a single garret.

He did the Oxbridge thing sometime in the 2000s and failed to learn anything of substance. He has had many jobs, including ice cream maker, fortune teller, lab technician, and professional gambler. He was fired from most of them.

He can neither cook nor sing, but he can handle a 17th century smallsword, punts from the proper end, and knows how to hotwire a car.

He lives in southeast England, with no cats and no children, and fully intends to keep it that way.

Add How to Blow it With a Billionaire to your shelf on Goodreads: http://bit.ly/2lmmXBD 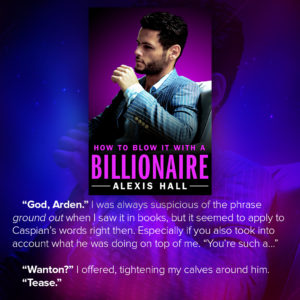 Enter to win 1 of 15 free ebook downloads of How to Bang a Billionaire!