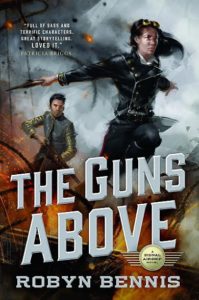 The nation of Garnia has been at war for as long as Auxiliary Lieutenant Josette Dupris can remember – this time against neighboring Vinzhalia. Garnia’s Air Signal Corp stands out as the favored martial child of the King. But though it’s co-ed, women on-board are only allowed “auxiliary” crew positions and are banned from combat. In extenuating circumstances, Josette saves her airship in the heat of battle. She is rewarded with theMistral, becoming Garnia’s first female captain.

She wants the job – just not the political flak attached. On top of patrolling the front lines, she must also contend with a crew who doubts her expertise, a new airship that is an untested deathtrap, and the foppish aristocrat Lord Bernat – a gambler and shameless flirt with the military know-how of a thimble. He’s also been assigned to her ship to catalog her every moment of weakness and indecision. When the Vins make an unprecedented military move that could turn the tide of the war, can Josette deal with Bernat, rally her crew, and survive long enough to prove herself to the top brass?

Praise for THE GUNS ABOVE

“The Guns Above is a sharp, witty Ruritanian adventure full of flintlock rifles, plumed shakos, brass buttons… and airships! Taking place in an alternate mid-nineteenth-century Europe where dirigibles ply the smoky airover battlefields and women have been grudgingly admitted to the air corps,The Guns Above takes a clear-eyed, even cynical view of the ‘glories’ of war, complete with blood, shit, shattered limbs, and petty squabbles among the nobility. The aerial combat is gut-clenchingly realistic, the two viewpoint characters are well-drawn and as different as can be, and the action never stops. Hard women learn compassion, soft men learn bravery, and the fate of a nation depends on one rickety airship and its stalwart crew. A winner!”―David D. Levine, author of Arabella of Mars

“An engaging gunpowder adventure with a helping of witty Noel Coward dialogue and a touch of Joseph Heller.” ―Tina Connolly, Nebula Award-nominated author of Ironskin

“Wonderfully adventurous and laudably detailed. Bennis paints airship battles so clearly you’d swear they were from memory.” ―Becky Chambers, author of The Long Way to a Small, Angry Planet

“Buckle in. The crew of the Mistral will take readers on adventures they won’t soon forget.” ―Pip Ballantine, author of The Ministry of Peculiar Occurrences series

“Hold on to your goggles, Bennis‘ The Guns Above is a nonstop ride.” ―Suzanne Lazear, author of TheAether Chronicles Series

“A fast-paced military fantasy, full of colourful characters and quirky humour that had me laughing throughout. Every fan of airships should read this.” ―Marc Turner, author of Dragon Hunters

“Bennis writes a pleasing mix of banter and gritty battle scenes, combining both the adrenaline rush of combat and its horrifying results, and never indulging in too-sudden social victories that might cheapen the longstruggle against embedded prejudice.”― Publishers Weekly

JOSETTE DUPRE WOKE atop a bleak and stony hill, her head throbbing, her uniform soaked in blood, and the thunder of the cannons still echoing in her ears. Incandescent embers danced above her, swarming past her body and disappearing into the oily smoke all around.

Her only living companion was a carrion crow that stood atop her boot. She tried to kick it off, but lacked the strength for even that trifling movement. The crow held firm, staring back at her with little black eyes that reflected the flaming wreck of the airship Osprey. She had no memory of her escape from the stricken ship, but she must have gotten out somehow. If she were still inside, she would be on fire, and she was reasonably convinced that this was not the case.

From somewhere down the hill came the sounds of hoofbeats and musketry. The musket fire was sparse—not the crisp, hearty bang of a fusillade, or even the rolling crackle of skirmishers. Rather, these were the sounds of a rout; of an army not merely defeated but shattered, its remnants a panicked mob fleeing from pursuing horsemen. But which army had been routed? Hers or the enemy’s?

At that moment, she couldn’t recall who was winning when Osprey went down. She remembered the crash, and the hostile soldiers who swarmed over Osprey’s railing. She remembered commanding the crew to burn the ship. But after that, there was a most curious gap in her memory, beginning from the moment a skirmisher cracked the butt of his rifle into her skull.

Now that she thought of it, she couldn’t even recall what enemy they were fighting. Was it Brandheim or Vinzhalia? But this couldn’t be Brandheim—it wasn’t cold enough. Yes, yes. Brandheim was last year’s war. This year’s was Vinzhalia, which meant the battle had been against the Vins.

But who the hell had won the damn thing?

She had to work it out quickly. Scavengers from the victorious army were already approaching. She couldn’t see them through the smoke, but she could hear their boots clomping on the rocky earth, their bayonets slicing open pockets and packs, and the gurgling cries of wounded men who were too addled or stupid to play dead.

They chatted while looting, but Josette couldn’t discern their language. By the sound of it, this regiment had been drawn from some border county and spoke a dialect neither quite Garnian nor Vinzhalian. She did her best to place it, but she had no ear for that sort of thing.

They came so close that she could see their silhouettes, like shades lurking in the gloom. She closed her eyes, for she couldn’t hold them open in this stinging smoke, but now she couldn’t see their uniforms. Moreover, she was only delaying the inevitable, consigning herself by inaction to a lingering death on this miserable hill.

Footsteps approached and the crow took flight. Above her, a young man spoke. She could barely make out his mutt dialect, but he seemed to be lamenting the waste of a woman killed in battle. This sentimentality did not stop him from kneeling down and rifling through Josette’s pockets. Finding nothing of value, he drew a knife, cut away her flight harness, and sliced open all the hems and folds in her uniform where a soldier’s wealth might be hidden.

She stayed limp through it all, even when an exploratory hand groped under her waistcoat and lingered there far longer than was required to check for coins. Her resolve wavered only when she heard the pliers click together. She’d heard that a good set of teeth could fetch as much as five liras, and now lamented the lack of decay in hers. Could she stay still, stay quiet, while her teeth were being yanked out one by one? How many would he take? How long would she have to endure it? Perhaps it was better to cry out now and risk the bayonet.

And then she heard the airship above. By its sound, she judged it a light semi-rigid with six airscrews, a Deacon steamjack engine, and Merle reduction gearing. That made it an N3-class scout—probably Captain Ravi Salicar’s ship, the Sparrowhawk. And since the fusiliers weren’t alarmed by its presence above them, they were surely Garnian as well.

Her eyes shot open and she called out, “Stop!”

The Garnian fusilier froze with his pliers an inch from her mouth. Another man came to help, and together they pulled Josette to her feet. As she rose, the throbbing in her head turned into a sucking, hollow feeling. Her vision filled with stars, and the world went black.

Robyn Bennis is a scientist living in Mountain View, California, where she works in biotech but dreams of airships. She has done research and development involving human gene expression, neural connectomics, cancer diagnostics, rapid flu testing, gene synthesis, genome sequencing, being so preoccupied with whether she could that she never stopped to think if she should, and systems integration.

Her apartment is within sight of Hangar One at Moffett Airfield, which was once the West Coast home to one of America’s largest airships, the USS Macon. 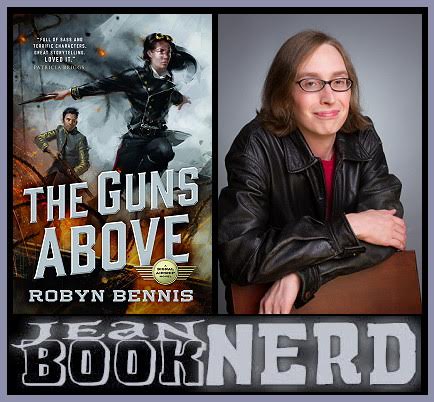