I am so excited that PROJECT EMERGENCE by Jamie Zakian releases today and that I get to share the news!
If you haven’t yet heard about this wonderful book by Author Jamie Zakian, be sure to check out all the details below.
This blitz also includes a giveaway for a DVD of Passengers, US Only or the complete eBook set of Fire In The Woods, International, courtesy of Month9Books. So if you’d like a chance to win, enter in the Rafflecopter at the bottom of this post.
About The Book: 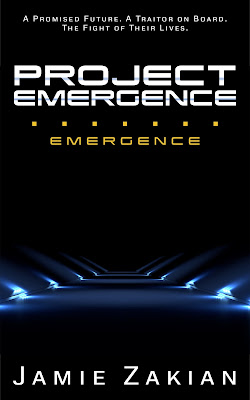 Title: PROJECT EMERGENCE
Author: Jamie Zakian
Pub.
Date: March 14, 2017
Publisher: Month9Books
Format: Paperback, eBook
Pages: 292
Find it: Goodreads | Amazon | B&N | TBD | iBooks | Kobo | Google Play Books | Indiebound
An ancient Hopi myth says people arrived on tiny silver pods that fell from the sky.
But the truth is far more terrifying.
Two-hundred fifty-eight teens are sent from a dying Earth to a terraformed Mars as part of the Emergence Program, mankind’s last hope before solar flares finish off their planet and species. Among the brave pioneers are sixteen-year-old Joey Westen and her twin brother, Jesse.
After only minutes in space, something triggers a total ship lock down.
With the help of their roommates, the Matsuda twins (notorious hackers and shady secret-keepers), Joey and Jesse stumble onto an extremist plot to sabotage the Emergence Program.
But Joey and Jesse didn’t travel to the deepest pits of space and leave their mother behind to be picked off in a high-tech tin can. They’ll lie, hack, and even kill to survive the voyage and make it to Mars.

Excerpt:
Beads of sweat formed between Winslow’s palm and the device, but he held
tight. All his screens, which provided invaluable data, sat as black as the
infinite cosmos before him. Flying blind, in ancient throughways created by …
only God knows who—it unsettled and disturbed the mind.
However, the bowed
windshield provided him a spectacular view without the instrument panel aglow.
Leaning over, he searched for the orange glimmer of Earth, but after
ninety minutes in hyper drive, the scorched planet was far from view. The
bright streaks of distant stars overshadowed any hope of glimpsing home.
“Do you really think that woman can stop the … ” Natalia glanced around
then leaned in to whisper, “attack.”
“We’ve made it farther than all the other expeditions. That gives me
hope,” he replied softly.
“We had a great run though, didn’t we?” Natalia smirked as she tucked a
stray hair behind her ear.
“Remember that time—”
“This sounds an awful lot like a goodbye speech, Kozlov.”
“Ooh, Kozlov,” Natalia drawled. “You haven’t called me by my last name
since I was a cadet. Geez, you must be serious.”
“We have to have faith.” Winslow looked to the men and women stationed at
the far end of the control room, then to the shining rod in his grasp. “The
human race can’t end with us; we’ve come too far. We have to persevere.”
“You know. After you told me about the other ships, I almost resigned
from this voyage.” Natalia turned her chair from the control panel, facing him.
“Do you know why I didn’t?”
Winslow clicked his chair around, staring at Natalia. A pink tinge
flushed her cheeks, her nails drumming out a steady beat on the armrest. She
looked so anxious. Risky test flights, solar flares, bombs, nothing shook her
nerve so far. Yet right now, her lips trembled.
“I’m in love with you, Gerald. If we’re gonna die in thirty minutes, I
thought you should at least know that.” Her eyes darted away, and she repositioned
her seat.
His jaw dropped open. He tried to speak, but his words bunched in his
throat. Natalia stole a glance and a hard thump rattled his chest. He never
noticed that sparkle in her blue eyes, which gleamed against her olive skin,
until now.
A wisp of brown hair fell from behind her ear, and his heart skipped
faster. He looked to his watch, his hold on the jammer tightening. Only twenty
minutes left. What-ifs and could-bes didn’t much matter anymore, these were
most likely his final moments.
He unfastened his safety belt, scooting to the edge of his seat. A smile
threatened to invade his lips, but he held a straight face. The shuffle of
crewmembers faded as he pulled the lever beneath Natalia’s seat, spinning her
chair to gaze upon her face. An unexpected flutter ran through his stomach with
her stare, her smirk. It drew him in, brought him to one knee. Their lips found
each other, and he kissed her, softly, under the glow of starlight.
About Jamie: 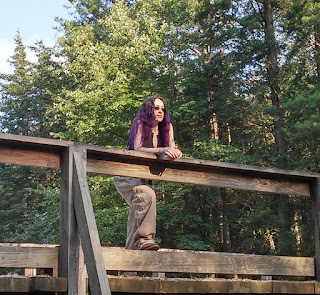 Jamie Zakian is a full-time writer who consumes the written word as
equally as oxygen. Living in South Jersey with her husband and rowdy family,
she enjoys farming, archery, and blazing new trails on her 4wd quad, when not
writing of course. She aspires to one day write at least one novel in every
genre of fiction.
Website | Facebook | Twitter | Goodreads

Giveaway Details:
1 winner will receive a DVD of Passengers, US Only.
1 winner will win the complete FIRE IN THE WOODS eBook set, International. 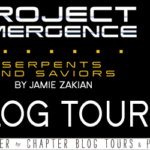