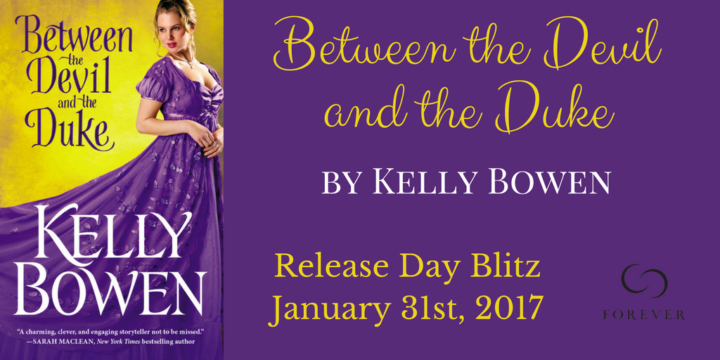 BETWEEN THE DEVIL AND THE DUKE by Kelly Bowen 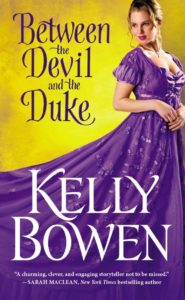 Their love was always in the cards.

He should have thrown her out. But when club owner Alexander Lavoie catches a mysterious blonde counting cards at his vingt-et-un table, he’s more intrigued than angry. He has to see more of this beauty-in his club, in his office, in his bed. But first he’ll have to devise a proposition she can’t turn down.

Gossip said he was an assassin. Common sense told her to stay away. But Angelique Archer was desperate, and Lavoie’s club offered a surefire way to make quick money-until she got caught. Instead of throwing her out though, the devil offers her a deal: come work for him. Refusing him means facing starvation, but with a man so sinfully handsome and fiercely protective, keeping things professional might prove impossible . . . 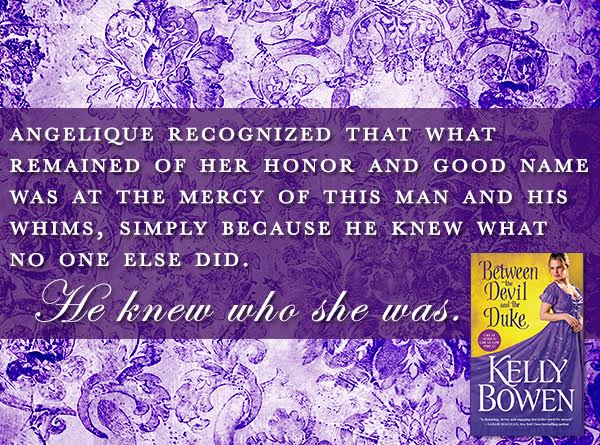 “I don’t suppose you’d be interested in a job?”

“A job?” Angelique was aware she was repeating him like a half-wit, but she couldn’t seem to wrap her head around the last minute of conversation.

“Ladies don’t have jobs.” Angelique tried to put some conviction into that statement, knowing it was what she was supposed to say. Such knowledge had been drilled into her since she was old enough to walk. Ladies grew up and married well and became wives who lived out their lives in genteel comfort. They did not partake in industry. Or gambling.

At least they didn’t until they did not marry at all, much less well, and their parents died, their family fortune went missing, and their newly titled brother couldn’t stay sober long enough to look for it. Then ladies did what they had to do to hold their families together.

She glanced up at him, but her sharp reply, like everything else, had only seemed to amuse him.

“A strange thing to say for a lady who already treats my vingt-et-un table as her personal place of business.” Lavoie’s lip had curled, his scar making it look more like a smirk than a smile.

She looked away, despising the truth in his assessment. “I do no such thing. Ladies don’t have jobs,” she repeated, though it was a pitiable attempt at her defense.

“Ladies don’t have jobs that people know about,” he countered.

“What? What does that mean?” Angelique’s eyes snapped back to his.

Lavoie moved out from behind his desk and leaned back against the front of it. He crossed his booted feet casually, never taking his eyes off her. “It means, my lady, that once you stop pretending to be aghast, and you understand that I offer the potential to earn more money in a single night than you will earn in three at the card tables, you might wish to reconsider. I wish you to deal a high-stakes vingt-et-un table that can accommodate at least six players who will be playing against the house and not each other. Who will be playing against you.”

Angelique was at a loss for words.

“I don’t need to have your answer now,” he said, tipping his head. “You know where to find me. I will pay you for your time, of course, and you will also receive a percentage of whatever you—my club—wins. I promise that your identity will remain concealed. And unlike the men you have had to endure thus far at the tables, I promise that I won’t touch your breasts. And anyone else in my club who might attempt to do so in the future will answer to me.”

She felt her face heat all over again, even as another hail of unwanted thrills crackled through her like a summer storm.

“Tell me you’ll think about it,” Lavoie prompted.

“Very well.” The shock was wearing off, and Angelique was trying her best to collect her scattered thoughts. She’d be an idiot to deny him outright. She didn’t trust him entirely, but her current situation didn’t leave her many choices. And she couldn’t deny that his offer, like the man himself, was more than a little…intriguing. Exciting. Fascinating.

Lavoie pushed himself off the desk, coming to stand directly in front of her. His eyes skimmed over her hair, her mask, her gown, as if he was evaluating—admiring—what he saw. “With a mind such as yours, I think you would be brilliant,” he murmured. “I think that you and I would make splendid partners.” 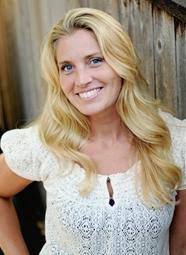 ABOUT THE AUTHOR
Kelly Bowen grew up in Manitoba, Canada. She attended the University of Manitoba and earned a Master of Science degree in veterinary physiology and endocrinology. But it was Kelly’s infatuation with history and a weakness for a good love story that led her down the path of historical romance.  When she is not writing, she seizes every opportunity to explore ruins and battlefields.
Currently, Kelly lives in Winnipeg with her husband and two boys, all of whom are wonderfully patient with the writing process.  Except, that is, when they need a goalie for street hockey. 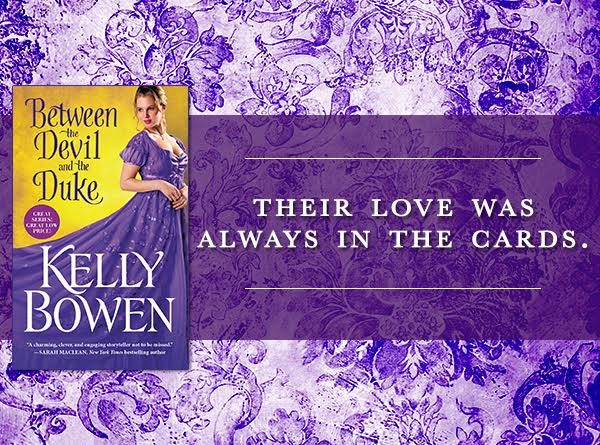 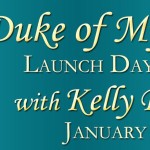 #Giveaway Excerpt DUKE OF MY HEART by Kelly Bowen