I AM SO HAPPY TO PRESENT THE COVER FOR HIGHLAND HELLION! 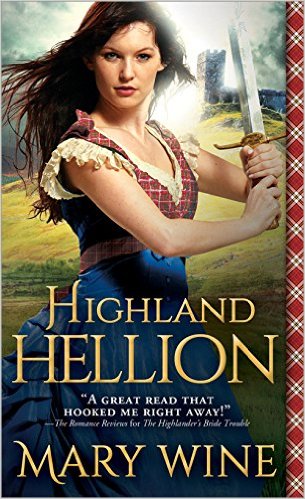 KATHERINE CAREW
Illegitimate daughter of an English earl… Abducted to Scotland at age 14… No family, no reputation… No rules

Scotland is seething with plots, the vengeful Gordons are spoiling for a fight, and the neighboring clans are at each other’s throats. All it takes is a passionate hellion with a penchant for reckless adventure to ignite the Highlands once more.

“Ye’re a fool,” Robert MacPherson grumbled. “And likely to get us both lashed.”

Katherine Carew didn’t offer him even a hint of remorse. She settled herself on top of her horse, confidence shining in her midnight-blue eyes. “I’ve trained as hard and long as ye have.”

“Yes, but ye’re—” Robert clamped his lips shut and took a hasty look around to make sure no one was listening. “Ye’re a woman now.”

And Robert was a man. Katherine found the new element in their relationship curious, and she didn’t care for the change. It threatened to upset the balance of her life—an existence that she liked very much. So she fixed him with a hard look, determined to change his thinking. “You are the one who suggested I start wearing a kilt in the first place.”

Robert frowned. “I was young and a damned fool.”

His eyes lowered to where she’d bound her breasts. His lips thinned and his jaw tightened, sending an unexpected sensation through her. It was slightly unsettling because Robert was her friend and compatriot. Yet he had taken to spending more time with the older men. She didn’t dare venture too close when he was with them for fear they would realize her game. Dressing contrary to her gender was a sin, an argument against what God had decided she would be.

“We’re going raiding,” Robert insisted in a low voice. “It is no place for a…for ye.”

“Ah, let the lad be,” Bari spoke up from where he was securing his saddle. The burly MacPherson retainer peered over at them, his face covered by a thick beard. “If he pisses himself, he’ll jump in the river before we return home, and he can share his whisky with us so we all don’t tell the tale.”

There was a round of laughter from the men close enough to listen in, proving that Katherine and Robert’s words were very much in danger of being overheard. Robert went still in a way she’d never seen before. Katherine actually felt the bite of fear as she realized he was considering unmasking her.

He was her only friend, and the betrayal cut her deeply.

Well, she was going.

Katherine made sure the straps of her saddle were tight. She took a great deal of pleasure in the fact that she knew as much about preparing a horse for riding as every one of the men surrounding her. That would certainly not be the case if she’d been raised in England.

Her old life was only a memory now, hidden behind her adventures in the Highlands. She smiled as she recalled the many things she’d done at Robert’s side while disguised as a boy. She gripped the side of the saddle, making ready to mount.

But a hard hand dug into the back of her jerkin and lifted her into the air.

“What?” Katherine was startled, or she wouldn’t have spoken because her English accent persisted. More than one head turned in her direction as she landed and found herself looking up into the eyes of Marcus MacPherson, war chief of Clan MacPherson.

“I told her she should nae go.” Robert was quick to assign blame to her.

Marcus had braced himself between her and the horse. The war chief was huge and stood considering her from a position she’d seen too many times to count while she trained under his command in the yard. Of course, he thought she was a boy, which made Robert’s choice of words very bad.

“You clearly did nae tell her firmly enough.” Marcus shifted his full attention to Robert. “There will be a reckoning owed when we return, sure enough.”

Robert bristled as more men came to witness his chastisement. “She’s the one who will no’ listen to good sense.”

“Agreed,” Marcus said. “Which is why ye should have pulled her off her horse as I just did, since it was you who brought her into me training yard six years ago.”

Katherine gasped. She hated the way the sound came across her lips because it was so…well, so feminine. The men were frowning at her, clearly disapproving.

She shook her head and leveled her chin. “I have trained, and I am as good as many a man standing here.”

“Ye are a woman,” Marcus stated clearly. “And ye do nae belong riding out with us when we are going to needle the Gordons.”

“It isn’t a real raid,” Katherine protested, but she kept her tone civil. She would always respect Marcus for teaching her to defend herself. “Just a bit of fun.”

“Aye,” Marcus agreed. “And yet, not as simple as that. Men get their blood up when they are testing one another’s nerve. It is no place for a woman, even less so for a maiden.”

“But ye did nae make certain she could nae venture into danger. That’s the difference between a lad and a man.” Marcus spoke softly, which only gave his words more weight. “It’s past time for ye”—he pointed at Robert—“to recognize that a little lass like Katherine has more to lose if our luck does nae hold. As a MacPherson retainer, I expect ye to make sure the women are taken care of. That’s the real reason they respect us, no’ simply for the sake of our gender.”

Marcus shifted his attention back to Katherine, and she felt the weight of his disapproval. “Ye could be raped and ruined.”

“My reputation is already ruined because I am here,” Katherine protested.

“That is no’ the same thing at all,” Marcus informed her in a steely voice. “And I hope to Christ ye never discover the truth of the matter. For tonight, ye’ll take yerself back inside, and I will deal with ye when I return.”

Marcus’s word was law on MacPherson land. Only his father and his brother, Bhaic, might argue with him, and Katherine wasn’t dense enough to think either of them would disagree. So she lowered her chin and bit her lip. It earned her a soft grunt from Marcus before he moved back toward his horse.

Then the muttering started.

“More trouble than we need…”

Men she’d thought of as friends suddenly turned traitor, calling her “English” as though she had only recently arrived on their land.

She’d truly thought her feelings dead when it came to the subject of her blood. The rush of hurt flooding her proved her wrong.

Well, that was foolish.

And she would have none of it.

Her father’s blue, noble blood was a curse, and she’d learned the burden of it by the time she was five. His legitimate wife detested her because of the cost of the tutors needed to educate her and the dowry she’d require. She’d been abducted because of that dowry and nearly wed at fourteen.

Marcus MacPherson had taken her into the Highlands instead. It had seemed to be the perfect solution. So far removed from England and her family, there was no one to tell her what she must be. She had been free.

Even from her gender.

Katherine lifted her chin because even after mounting, the MacPherson retainers were still considering her. She refused to crumble. Training among them as a lad, she’d learned to keep her tears hidden, and she’d be damned if she’d show them any now. A stable lad suddenly came up and tried to take her horse.

“I’ll tend to my own mount,” she informed him, making sure her voice carried. “As I always have.”

Katherine didn’t wait to see what those watching made of her words. She reached up and ran a confident hand along the muzzle of her horse before she turned and started to lead it toward the stable.

Indeed, she took care of herself, and that brought her much-needed relief from the sting of her bruised emotions.

“One to read again and again… Breathtaking.” —Long and Short Reviews for Highland Heat

Want to win a copy of Highland Vixen?

**Giveaway Ends 2.24.17 and open to all who can legally enter.
Open to residents of the US Only
Must be over 18 or have your parents permission to enter.
An email will be sent and you have 48 hours to reply or a new winner will be chosen.
The Winner will be announced within 48 hours at the end of the giveaway.
Giveaway is organized by Bookhounds and sponsored by the Publisher (email Bookhounds@hotmail to verify if you won!)
It has no affiliation with Facebook, Twitter or any other entity.
Void where prohibited.**
Not Responsible for lost, stolen or misdirected prizes.