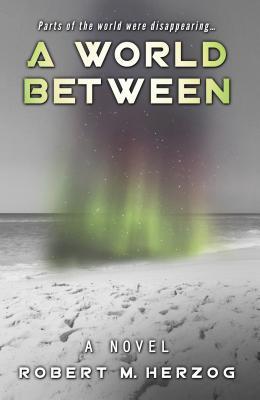 What if huge chunks of the Earth—beaches, canyon walls, mountains—simply vanished?  Entrepreneur, political philosopher, and passionate writer, Robert M. Herzog unfolds this mind-boggling scenario in his debut novel, A WORLD BETWEEN. Melding apocalyptic fantasy with scientific facts and astounding possibilities, this riveting work of fiction raises unsettling questions about the very foundation of our reality.

Could it really be the end of the world, or, perhaps, the beginning of a new one? What force—environmental, divine, or human—is behind this bizarre and chilling phenomenon? Pulsing with intrigue and danger, complicated by romantic attractions and political agendas, A WORLD BETWEEN unravels a gripping plot while rocking our sense of security and certainty. The result is both a compelling portrait of a world that could be and a metaphor for the world that is. With this accomplished, mesmerizing, and unique work of literary and speculative fiction, Robert M. Herzog is certain to make waves of his own and captivate readers.

ROBERT M. HERZOG has had his stories and poems published in Solstice Literary Magazine, Toasted Cheese, Downstate Story Magazine, Straylight Literary Arts Magazine, and South Jersey Underground. A physics major until he read Nietzsche, he went on to blaze trails as a political philosopher and entrepreneur. For over thirty years, he has founded, built, and led businesses dealing with the major issues of our time, from energy and the environment to technology and digital media to health care. A Brooklyn boy who’s climbed Mt. Kilimanjaro, he remembers the taste of the first (and subsequent) great wine he drank, and continues to savor a life of adventure enriched by family, friends, and children.

Six issues of the New Yorker, dating back to August; my iPad which I use at night for Kindle reading, (most recently The Sympathizer, an amazing book by Viet Thanh Nguyen), playing gin rummy, playing the NY Times Minipuzzle and checking the temperature of our house upstate; a Sharper Image white noise machine which I never use but there it sits; two connected wooden balls to massage my often aching back; the Consumer Reports 2016 Buyers Guide; Books: The Future of Theoretical Physics and Cosmology, Celebrating Stephen Hawking’s 60th Birthday (gift from a friend); Blood, Sweat and My Rock n’ Roll Years: Is Steve Katz a Rock Star, by Steve Katz (I met him recently, he was in The Blues Project, one of my all time favorite groups); the Coming, by Andrej Nikolaidis; I Curse the River of Time, by Per Petterson; and Game for Five, by Marco Malvadi.

If Shakespeare were alive I’d definitely be following, imagine his daily thoughts coming atcha!  Ditto Bob Dylan.  And John Burdett, his stories while set in Thailand have riffs on contemporary society and culture that are wildly insightful and imaginative.

After the election, I’m afraid that’s dominating my gag reflux.  I grew up in the Sixties, and the thought of what will dominate policies and the courts for years to come around women’s rights, climate change, the treatment of different peoples, the callous indifference to the poor to benefit the rich, scares and saddens me, not the way I thought or hoped the world would turn out.  Prior to the election, I would have said an abhorrence for when injustice goes unpunished, such as the spate of killings of young black men in this country, which I’m sure has been going on for a long time and we’re now only able to notice because of cell phone cameras.

It’s a mix, certainly first drafts stream with the river of my mind.  Revisions are more detailed, especially in thinking through the timing of details when and how they are revealed, the relationship to each other across the flow of the book.  Those foreshadowing elements… “It was the last time he would ever see her this way…” and such, to engage the reader.  Since I love language, the turns of words and phrases that captivate, provoke and capture large thoughts in a few words, I do perhaps obsess more about that.

Hopefully the right one at the right time!  If anything, I try not to be repetitive in the use of words, unless its for an effect.  I will say I do love the word murmur.  Also intrepid.

Sorry, no pets.  While I love dogs, I live in New York City, and I just won’t scoop poop.  When I was a boy I had a beagle for a short time, and also a half moon parrot.  Do the mice in our apartment count?  We once found some swinging in our dishwasher like they were playing on the monkey bars!

**Giveaway Ends 12.8.16 and open to all who can legally enter.
Open to residents of the US Only
Must be over 18 or have your parents permission to enter.
An email will be sent and you have 48 hours to reply or a new winner will be chosen.
The Winner will be announced within 48 hours at the end of the giveaway.
Giveaway is organized by Bookhounds and sponsored by the Publisher (email Bookhounds@hotmail to verify if you won!)
It has no affiliation with Facebook, Twitter or any other entity.
Void where prohibited.**
Not Responsible for lost, stolen or misdirected prizes.