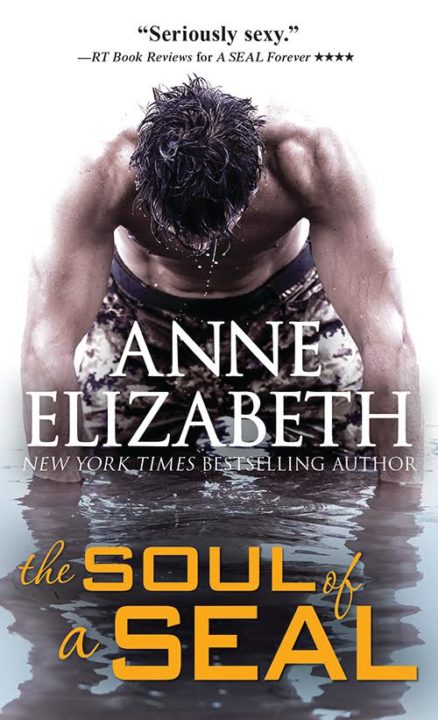 Anne Elizabeth is a romance author, comic creator, and a monthly columnist for RT Book Reviews magazine. With a BS in Business and MS in Communications from Boston University, she is a regular presenter at conventions as well as a member of The Author’s Guild and Romance Writers of America. Anne lives with her husband, a retired Navy SEAL, in the mountains above San Diego. Visit her website at www.AnneElizabeth.net. 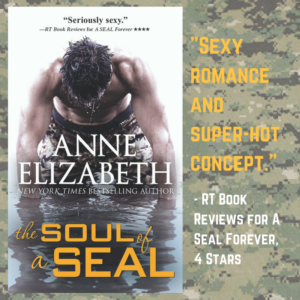 SEALs and their families are human. They have the same challenges that other military families do such as spending quality time together; health challenges; moments of spiritual crisis; money issues; births; deaths; marriages; divorces; child custody; location changes; duty changes; making rank or not making rank; new commands; retirement, etc.

As he turned the corner, he smacked right into her as if he had conjured her, sending her heading for the floor. He wasn’t a small guy. At six feet and 160 pounds, he was all muscle and could have been a decent wide receiver for any NFL team, even in his early forties. He ran every day, worked out, and had serious stamina for whatever task was at hand.

His hand caught hers, and with one tug he had her safely in his arms. He cradled her against him. He murmured in her ear, “Sorry about that.” His first instinct was to be polite and distant, but this contact brought a wave of protectiveness with it that made him even more uncomfortable. He needed to keep his perspective. “I always seem to be apologizing to you.”

“Must be something about me,” she murmured against his chest. Her body changed from pliant to stiff almost instantly. They were locked together for several seconds.

Realizing that she had to be at least five feet ten inches was kind of nice. It meant he wouldn’t have to bend down when he kissed her. Shit, there went his libido. He was attracted to her. Now he was going to have to be careful he didn’t compromise the mission.

Bennett righted her, and his hands dropped away from her gorgeous form. “Dr. Warren…”

Kimberly looked up at him. Her hands settled on her hips. Frowning, she said, “Captain, it was me. I wasn’t watching where I was going. I needed to consult with you anyway.”

“I…I have files for you.” The way she was groping for words meant he definitely had an effect on her. At least they were both in the same boat. Besides, his gut told him that she was an ally, wanting to get the shuttle off the ground and to find out who had killed the SEALs.

She pushed several files into his hands. “If you’ll excuse me.” She stepped around him, making a wide arc. Before she rounded the next corner, she stole a glance at him and blushed.

He smiled at her. Damn, he couldn’t remember the last time he’d been so drawn to a woman. The scent of lavender still filled his senses, and a hint of something else. Not rosewater. What was it, jasmine? Mmm, intoxicating.