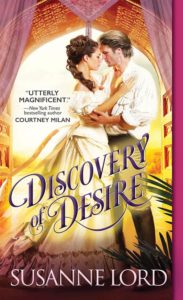 “If you like your romance with the sweetness of Mary Balogh’s novels or the anguish of Sherry Thomas’, this is one to cherish.” —Kirkus Reviews, STARRED Review

The one man who’s not looking for a wife

Seth Mayhew is the ideal explorer: fearless, profitable, and unmarried. There is nothing and no one he can’t find—until his sister disappears en route to India. His search for her takes him to Bombay, where Seth meets the most unlikely of allies—a vulnerable woman who’s about to marry the wrong man.

Discovers a woman who changes his dreams forever

Teeming with the bounty of marriageable men employed by the East India Company, Bombay holds hope for security for Wilhelmina Adams. But when the man she’s traveled halfway around the world to marry doesn’t suit, Mina finds instead that she’s falling in love with a man who offers passion, adventure, intimacy—anything but security…

Susanne Lord is a writer of Victorian-era romance and author of the London Explorer series published by Sourcebooks.  Originally from Okinawa, off-base and on, she now makes her home in Chicago where she is an active member of Chicago North RWA.  When not writing, attending theater or reading, she enjoys hiking the English countryside and visiting historic homes and gardens.

The second in Susanne Lord’s critically acclaimed London Explorers series, Discovery of Desire, is out this September. To give you a taste of her latest release, Susanne Lord has selected one of her favorite quotes from the book to share with us.

Author’s Note: Seth has disembarked from the steamship, onto the crowded, bustling port of Bombay. The other passengers, including the four dozen lady passengers who had sailed to wed East India Company men, are rushed by the bachelors and huddled together in the chaos…

A woman’s voice. Sweet and low and nearly swallowed in the fray.

Maybe it was because his explorer’s senses were honed to seek the rare, the anomalies in nature, but Seth trailed that voice to a venture girl twenty feet away. She wore a trim white jacket and green skirt with starry, white flowers all over it. Her sun helmet concealed all but a bit of brown hair.

“Ladies, as no one has told us yet what to do, if you are to be met by someone, would you move to this end?” She gestured and the ladies shuffled to do her bidding, obedient as soldiers.

Seth jerked to follow, then paused. He was to meet someone. Should he wait with them?

A small wave of her hand and the ladies leaned forward in attention. He did, too.

“And the others can wait here for Captain Travers,” she said. “He will accompany you to the customs house.” The women sorted themselves, fear in every pair of eyes clinging to their officer.

Seth dragged in a lungful of air that didn’t ease the tightness in his chest. Wasn’t any of his business. And wasn’t a thing he could do to help.

He turned to plunge into the crowd, but then the little officer spoke again.

The words were plain, but it was like she’d hushed the whole world. He didn’t want to, but he looked again. The venture girls stood in two close circles, their small valises and parasols clutched to their chests, and watched the chaos around them with wide eyes.

But they kept their chins up now.

For the first time in months, a real smile curved his lips. People needed someone to depend on. Like those ladies depended on that little officer.

And she was little, at least to him. She wouldn’t stand any taller than his chin and his hands could span her waist. But little or not, she wore that dainty, braided jacket like a captain of the Eleventh Hussars. There wasn’t a wrinkle on her skirts or wayward crease in its folds. And that straight spine was all the sight he had of her—she didn’t fidget and she didn’t turn.

Composed, capable, orderly-like. He’d drive a woman like that to Bedlam.

But he fell a little bit in love with her anyway.

He was bumped from behind. The mustache-man angling for a closer look. “Give the ladies their breathing room, mate,” Seth said. “They might like a bit of time to repair themselves.”

The man swung about. “You traveled with them, didn’t you?”

“Did you learn any names? Which are the prime articles?”

The man turned around to survey the girls. “Not that I expect them all to be handsome. They couldn’t find a husband back home, could they? But taking an ugly wife…” He grimaced, then squared his shoulders. “I mean to have one, just the same.”

Seth stared down at the man and muttered, “There you go, mate. Words to set a lady’s heart aflutter.”

Irritated, Seth waded against the stream of bachelors closing in on the ladies. Wasn’t any of his business.

The men holding signs had formed a line and were shuffling toward the ladies to be claimed. They obeyed the little officer, too. His translator might be among them, so he read his way through the crush. MISS EUNICE SIMMS…MISS LOUISE ALPERT—

The man holding the card eyed him suspiciously. So this was his translator. Brown hair, spectacles, younger than he’d expected. But he looked clever. He’d do.

Seth grinned. “For your purposes, I am.” He shook his hand. “I’m Seth Mayhew. You’ll be working for me instead.”

“This explains it.” Seth handed him Will’s letter. “Will couldn’t leave England on account of his being leg-shackled and expecting a little baby. But Georgie’s my sister after all, and the orphan in Tibet is who she was after, so I’m here and Will’s not. It’s all a bit Hamlet-without-the-prince, but there it is.”

Tom Grant blinked behind his spectacles. “Who are you?”

“Seth May—” He never was skilled at explaining. “Read the letter, mate.”

Tom Grant passed the sign to him, cracked open the letter, and began to frown. That frown wasn’t how Seth wanted to start their partnership, but the man had agreed to the job, and would be earning a hell of a salary for the effort.

But Tom’s expression wasn’t growing any happier as he started page two.

Tom flipped the letter over and started reading from the beginning. Again.

With a sigh, Seth dropped his bag at his feet to wait—and remembered the sign: CLAIMING MISS W. ADAMS. Tom Grant was collecting one of the venture girls then.

W? The man couldn’t write her name in full?

Wasn’t any of his business.

Meaning to be helpful, Seth held the sign high and waited.

“Mina!” Emma clutched her arm. “I see him. I see your Thomas Grant.”

Mina’s stomach rolled. Thomas was here. Of course he was—of course he would be. If only the ground would steady. Her sister’s sudden grab had nearly toppled her. Ninety-nine days on a boat and she couldn’t seem to lock her knees.

Mina reached into her skirt pocket and squeezed the stone in her hand. Through her lace glove, the quartz was as cool as if it still held the weather of England within it… 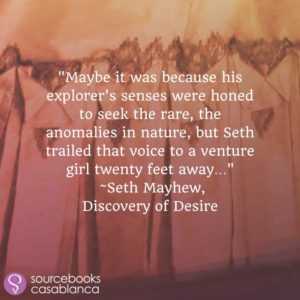