Excerpt 8 – As Rich as a Rogue by Jade Lee

Mari has just discovered damning evidence that her fiancé Lord Whitly is a fortune hunter. She and her parents confront him, and he has to admit to his difficult financial situation. So she calls off the engagement and rushes off to cry over her broken heart. Meanwhile, Peter is left behind with her parents and an impossible future.

“I don’t love you,” she whispered. And lest he think she was lying, the pure torment in her expression told him it was the truth. “I love what you want to accomplish. I love that I could help you. But now I don’t even know who you are. Oh God, another fortune hunter!” she cried.

She broke away, shoving to her feet in a clumsy display. Her sobs choked her, and she gasped even as she ran from him. He tried to catch her. He gripped her skirt as she stumbled away, but she tugged hard, and the fabric began to rip. He could not accost the woman. Not here on the floor of her father’s library. He could not grab her and drag her to his rooms where he could hold her until she grew calm enough to converse.

So he let her go, though his left hand was already reaching for her even as the right released her gown.

“Mari, wait!” he repeated, but she was already fumbling with the latch. A moment later, she was gone, and two footmen were staring in at him, their eyes wide and their mouths agape.

“Well, that’s a damned mess,” Mr. Powel said behind him.

Yes, it was. Peter pushed to his feet and dusted off his clothing. What more could he do, with the footmen staring and her parents looking at him with enough sympathy to make his pride churn? He was the heir to an earldom, for God’s sake. How dare two well-heeled cits look at him like he stood before them begging in rags?

Meanwhile, Mrs. Powel folded her hands together in her lap and shook her head. “Lord Whitly, I cannot understand what has occurred this night, nor do I approve.”

And now he would have to make apologies, damn it. To the mother with her pursed lips and her tight fists. “Your daughter does not know her own mind,” he said curtly.

“Don’t be ridiculous,” she snapped. “Mari has always known her own mind. It’s all the other things she muddles up.”

His gaze jerked to her face, wondering if there was meaning in there, but he was too tired to understand it. And he kept thinking that he heard Mari. A foot- step on the stairs. A thump in the room above them. Something that would tell him what she was doing. Was she calming enough to think? Was she cursing his name? Did she regret how he’d touched her last night? It distracted him and left his head thick, his chest tight. “Lord Whitly!” Mrs. Powel’s voice cut through his thoughts. He blinked and refocused, startled to realize that he’d been looking out the doorway.

“Lady Illston’s ball is in two nights. No matter what else happens, Mari will not miss that night. She has spent weeks training that bird, and even in a temper, she will not cry off your wager. I suggest you resolve your difficulties.” She gestured impatiently to the rolled map of London. “Whatever it is, see it done. And then think hard what you will say to her in two nights. I will be sure that she attends.”

He looked at her, his mind churning slowly. Resolve a criminal parent. Put a thieving ring in gaol. And then find a way to woo the woman of his heart, when a month of steady courtship had yielded nothing but…

But one night when she might have conceived his child.

It was a measure of his desperation that he wanted that as a way to force her hand. “I never thought I would have to work so hard for the woman of my choosing,” he mused absently.

Mr. Powel snorted. “Not for those timid English chits. But you picked a Welsh girl with fire in her. 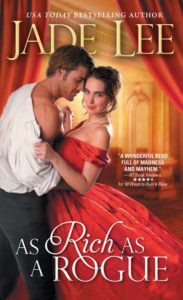 Title: As Rich as a Rogue

Mari Powel’s fiery Welsh temper is up. Peter Norwood, Lord Whitly, is back in town after six years romping around India making his fortune. Mari blames him for her social downfall and has spent all this time clawing her way back into the ton’s good graces. How dare he show up on his first day back and publicly embroil her in a bet involving long-awaited apologies, illicit kisses, and Lady Illston’s unruly parakeet? Mari is outraged, and is going to show him—and everyone else—what she’s made of. Little does she know, the unrepentant Lord Whitly has been dreaming of her all this time. Now he’ll do anything to win the wager—along with Mari’s heart.

USA Today bestselling author Jade Lee has been crafting love stories since she first picked up a set of paper dolls. Ballgowns and rakish lords caught her attention early (thank you Georgette Heyer), and her fascination with the Regency began. An author of more than 40 romance novels and winner of dozens of reader awards, she brings laughter into the sexy nights of England’s elite. Quirky characters and sexy banter are her hallmarks. Find out more at her website www.JadeLeeAuthor.com, or check out her wild contemporary half at www.KathyLyons.com.

A USA Today Bestseller, JADE LEE has been scripting love stories since she first picked up a set of paper dolls. Ball gowns and rakish lords caught her attention early (thank you Georgette Heyer), and her fascination with the Regency began. An author of more than 40 romance novels and winner of dozens of industry awards, she finally gets to play in the best girl-heaven place of all: a Bridal Salon! In her new series, four women find love as they dress the most beautiful brides in England. A Gentleman’s Gamble and What the Groom Wants are coming out in January and February.
And don’t forget KATHY LYONS. She’s Jade’s lighter, contemporary half. Don’t you hate it when you share erotic dreams with a stranger? It happens in her new Kathy Lyons series. Dream Nights with the CEO is available now!
To find out all the latest news on Jade or Kathy, visit them on the web at www.jadeleeauthor.com or www.kathylyons.com!

WANT TO WIN ONE OF TWO COPIES?

**Giveaway Ends 8.20.16 and open to all who can legally enter.
Open to residents of the US Only
Must be over 18 or have your parents permission to enter.
An email will be sent and you have 48 hours to reply or a new winner will be chosen.
Winner will be announced within 48 hours at the end of the giveaway.
Giveaway is organized by Bookhounds and sponsored by the publisher
It has no affiliation with Facebook, Twitter or any other entity.

Not Responsible for lost or misdirected prizes