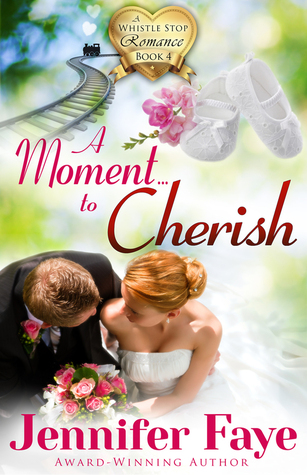 A Moment to Cherish

NOTE: each book in the series can be read as a standalone. Each couple has their own HEA.

Whistle Stop is abuzz…the mayoral election is just weeks away.

Candidate Mason Noble has a vested interest in fast-tracking the town’s revitalization project. But the votes he’d counted on are drying up because his engagement to Bella Nez ended abruptly. The local grapevine is humming with rumors, but only he and Bella know the truth. And they aren’t talking!

When an emergency puts Bella in the proverbial tough spot, she needs money and fast. There’s only one person who can help–Mason. He agrees to a loan, but he has a condition. He needs Bella by his side again. A reconciliation would win over the townspeople–and it would give him a chance to win back the only woman he’s ever loved.

Bella hesitates to accept Mason’s terms. Until she’s blindsided by an unexpected news that has her rethinking everything. Bella is expecting a baby, and there’s a heart-wrenching choice to be made… 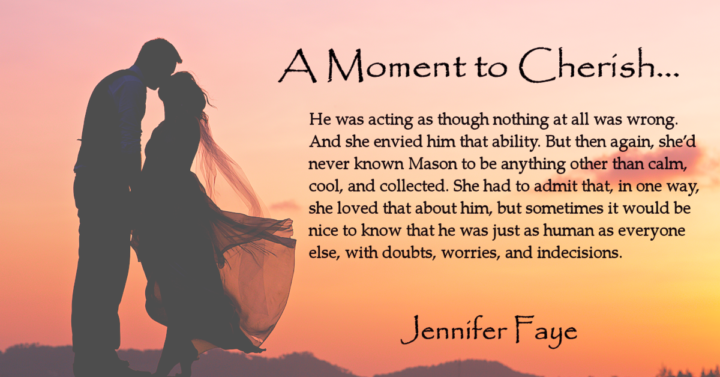 Bella started walking, and Mason fell in step beside her. For a while neither spoke, and then they both spoke at once. They stopped and turned to each other.

“Sorry,” Mason said. “Go ahead and finish what you were saying.”

“Oh, okay. I was just going to ask what you plan to tell people about that, um, kiss.”

“What do you want me to tell them?”

She frowned at him. “That’s not fair. You turned the question around on me.”

“Fine. I probably won’t tell them anything. It’s none of their business.”

She nodded as though she approved of that approach. “But why did you do it?”

Mason shifted his weight from one foot to the other. “Would you believe me if I said I got caught up in the moment?”

She shrugged. “You know, it’ll probably be in the newspaper.”

“I don’t think it was that newsworthy.” He tried his best to downplay it, but deep inside embers still burned for her.

“Wow! I had no idea this town was that boring. If that’s what qualifies as news, I’ve got my work cut out for me as mayor to liven things up.” But that would come after he gave their economy an infusion of new life to pump it up.

“What? I am. By the way, what did they say about my last haircut? Was it a little too short in the back?”

She lightly swiped at his arm as a smile lifted her lips. “Mason, quit joking around. I don’t want everyone thinking that we’re, well, that we’re getting back together.”

A MOMENT TO LOVE

The notorious cowboy meets his match…

Cord Lawson instantly distrusted the young woman in a smart suit who’d just arrived in Whistle Stop.  She was very pretty and clearly a city girl—but with memories of his failed marriage still darkening his mind, he’s determined to steer clear!  But she’s sniffing around his land—land that had been in his family for generations. There was no way he’d let it go—even if the bank was threatening to foreclose, and selling could give Whistle Stop a new lease on life.

Alexis Greer had one mission in mind—close the deal on the Granger estate; without it, her father’s land development company would go bankrupt.  But the word around town is to keep clear of Cord and to stay away from his precious land.  What in the world had happened to cause such a handsome cowboy to live such a solitary existence?  However, determination was Lexi’s middle name, and she just had to keep on trying to breach Cord’s barriers, appeal somehow to his head and heart—even if it put her in danger of losing both of hers…to him. 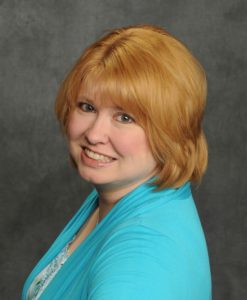 Jennifer is a two-time winner of the RT Book Reviews Reviewers’ Choice Award, has been named a TOP PICK author, and has been nominated for numerous awards.

Now living her dream, she resides with her patient husband, amazing daughter (the other remarkable daughter is off chasing her own dreams) and two spoiled cats.

However, you’ll have to select at least one thing on the Rafflecopter.

Remember, the more you do, the more chances you have to win…

By participating in the giveaway you are agreeing to all of the rules and regulations of this promotion. The giveaway is open to legal residents of their respective countries and is void if prohibited by law. This giveaway is not associated with Facebook, Twitter or Rafflecopter.

You must be 18 years of age or older to enter.

WINNERS WILL BE ANNOUNCED IN THE RAFFLECOPTER WIDGET

After notification, the winner will have 48 hours to respond 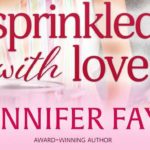 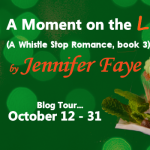 $15 #Giveaway Excerpt A MOMENT ON THE LIPS by JENN