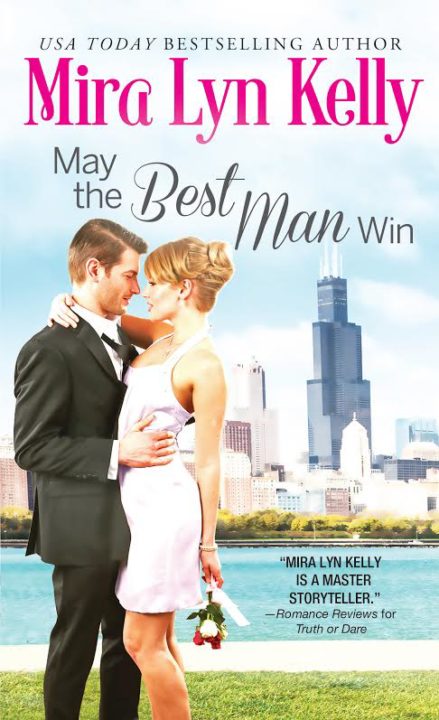 Jase Foster can’t believe his bad luck. He’s been paired with the she-devil herself for his best friend’s wedding: Emily Klein of the miles-long legs and killer smile. She may be sin in a bridesmaid dress, but there’s no way he’s falling for her again.

They can barely stand each other, but given how many of their friends are getting married, they’ll just have to play nice—at least when they’re in company. Once they’re alone, more than just gloves come off as Jase and Emily discover their chemistry is combustible, and there may be something to this enemies to lovers thing after all…

He looked down at her feet, which had taken on a mottled, angry appearance, and growled, “What the hell were you doing?”

Opening her mouth to speak, she snapped it closed again when those big hands started rubbing over her abused flesh.

“Barefoot. No jacket. Running across the—” His eyes went to the roof of the car, and Emily had the distinct impression that Jase was within a hellfire’s throw of blaspheming the sacred parking lot. “What? Didn’t want to ruin your shoes? Couldn’t be bothered with the hassle of a jacket? Is your vanity skyrocketing so high that the oxygen’s too thin to feed your brain?”

Her chattering teeth ground together as heat born of too many years listening to Jase Foster sell her short started to burn inside her. Her arm snapped out, one finger pointing in accusation. “I appreciate the r-rescue, but I-I’ve about had it w-with the rest of your b-bull. I d-don’t need you l-looking to tear me d-down every opportunity you can f-find. Not that you d- deserve it, but here’s the d-deal.”

Through chattering teeth, she detailed the chain of events leading up to her rescue, starting with the missing ring, the limo driver taking off before she could get her things out of the back, her car, and the fact that no one seemed to even notice she’d gone into a ditch. With each clarification she warmed a little more, her teeth chattering a less. “With all the ice under the s-snow, I thought I’d probably kill myself t-trying to cross the l-lot in those heels and figured my only option was to r-run. It wasn’t about vanity, you arrogant, accusing j-jackass. It was about necessity. So screw off!”

She finished on a rush of breath and then snapped her hand back under the blanket, quickly looking across the lot at the church. This guy didn’t deserve an explanation. She wasn’t supposed to care enough about what he thought to feel the need to give him one. But after everything else that had gone wrong today…

The heater blowing was the only sound. Then, “Are you okay?”

“I’m frustrated, Jase. Not about to b-break down and s-sob all over you or anything. Can you just drive up to the entrance and drop me? I c-can get in on my own from there.”

“Physically okay is what I’m asking. Your car is in a ditch. Did you bump your head or strain your neck?”

“Oh. Um, no. I was taking the turn into the lot pretty carefully, so when the wheels lost traction and started to slide, it was kind of a slow-motion event.” At his skeptical look, she let out a laugh. “I can’t believe you care, but really, it’s the truth. My heart was going faster than the car, I think.”

He gave a stiff nod. “That’s good then.”

Okay, so they were back to being civil. “Do you think you can drop me at the front?” she asked again.

Jase looked out the windshield. “I’ll carry you in, but yeah, I’ll get by the door first and then run back out.”

The icy blocks that were her feet suddenly burned within the grasp of two wide hands. “Can you wiggle your toes?”

Her feet were in his lap, her legs stretched across the console between them. Her heels rested between his thighs, and he was rubbing the life back into her abused soles.

She wiggled her toes, and while they were a little stiff… “I don’t see an amputation in my future.”

Jase laughed, then seemed to catch himself and look out his driver-side window. But she could see through the reflection that he was still looking at her.

His hands moved over her feet, rubbing and squeezing the blood through them. Circling with his thumbs at the center of her arch. Stroking the muscle that ran along the bottom. It felt good. Really good. Like maybe even a little too good because that slow, steady, warming touch was starting to relax her in a way she wasn’t accustomed to when it came to Jase.

He palmed her heel and rotated her ankle, his fingers extending just the slightest bit up her calf. Enough that for one second Emily thought about how it would feel to have those big hands coasting up past her knee.

She gave her head a solid shake and tried to pull her foot back. But Jase just told her to relax—because he wasn’t taking her anywhere until he’d gotten her warmed up—and then moved back to her other foot. His long fingers spread over her chilled flesh. Pressing exactly the right spot. Rubbing so it took everything she had not to moan.

The silence was starting to feel strained, but maybe that was just because for a second there she’d thought about Jase in a way she’d been working very hard not to. And that wasn’t cool. They had mutual loathing down to an art form. They were good with it.

Anything else would just be…weird.

He rotated her ankle and then knuckled up the sole of her foot—and this time, the moan of pleasure slipped past her lips before she was able to yank it back.

Heat rushed into her cheeks, but she wasn’t going to let Jase have the last word or the upper hand. Even if he had just pulled off what could only be described as a rescue of Prince Charming proportions.

“Yes, please. And if you’ve got a s-snapshot of Max to leave with me, that’d be swell.”

“You know, Em. The key to a successful burn is keeping a straight face. Or short of that, stifling the snort laugh.”

She gaped, her eyes locking with his, and damn it, more laughter bubbled up her chest. “I did not snort.”

She leaned forward, amusement and indignation mingling in her next words. “I didn’t.”

She thought he was ready to deliver the next slam. She might even have been anticipating it, just a little. But instead of him waiting the mandatory beat and letting her have it, his brows drew forward, his gaze darkening.

She followed his stare to where his hands were cradling her leg. The long, thick fingers on one of his hands were splayed wide to cradle her calf, the other hand resting over her knee where her dress had piled up.

She hadn’t noticed it before. Hadn’t even been aware of where his hands had ended up when she shifted forward in her seat. But now, now she could feel his fingers like a brand. Feel that tingle of awareness, that low charge working its way outward. Riding the line of her leg, the bend of her knee, the length of her thigh. She could feel the heat of his palms, the press of each finger where it lay against her skin. God, she could feel her blood heating beneath them.

Jase looked back to her. His eyes smoldered now with something she’d never seen in them before. They were close, only inches apart. A blanket of snow had already covered the windshield and driver-side windows, making this space they were sharing feel private, intimate.

About Mira Lyn Kelly
USA Today bestselling author Mira Lyn Kelly grew up in the Chicago area and earned her degree in fine arts from Loyola University. She met the love of her life while studying abroad in Rome, Italy, only to discover he’d been living right around the corner from her. They live in rural Minnesota.