by Kim Addonizio
Published by Penguin 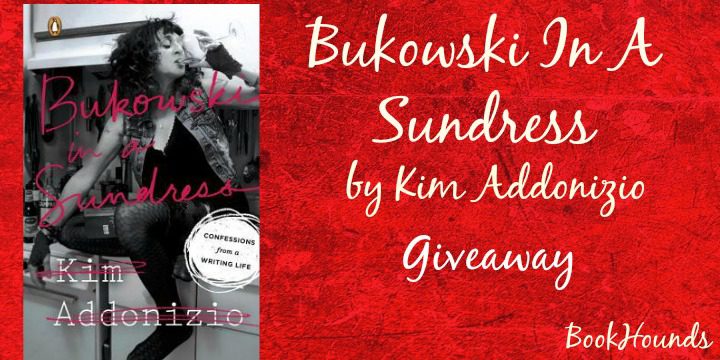 Bukowski in a Sundress by Kim Addonizio 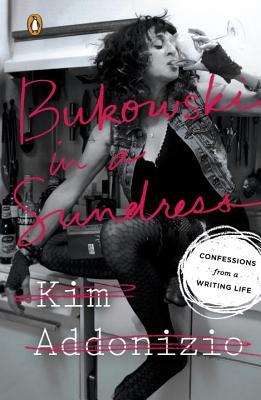 If Nora Ephron and Amy Schumer had a baby, it would sound a lot like Kim Addonizio. Like Mary Karr before her, Addonizio turns her poet’s sensibility to the art of memoir. In BUKOWSKI IN A SUNDRESS: Confessions from a Writing Life, Addonizio gives readers a backstage look at her life in letters—the good, the bad, and the hilarious. From surviving alcohol-fueled hook-ups at writer’s conferences to explaining the appearance of one of her stories in Penthouse to her teenage daughter to visiting her mother in the Geriatric Psych Ward, Addonizio writes with verve and candor about love, lust, family, and her career.

Addonizio has been hailed as “one of our nation’s most provocative and edgy poets.” It was a literary critic who first described Addonizio as “Bukowski in a sundress.” Though she suspected he was not being complimentary, Addonizio chose to embrace her new moniker because, she explains, it’s preferable to be a writer who is spoken about than one who is ignored. In chapters like “What Writers Do All Day” and “How to Succeed in Po Biz,” she illuminates what life is like as a writer, sharing stories of poorly attended readings, sexual advances from workshop students, and the mental wrestling matches and crippling self-doubt involved in getting words onto paper.

Equally compelling are the poignant and often uproarious stories about Addonizio’s family and romantic partners. Addonizio writes honestly and empathetically about her tennis champ mother whom she assisted through old age, her father who instilled in her a love of poetry, and her now adult daughter. Along the way, readers meet boyfriends, flings, and ex-husbands, all wrought in exquisite detail. With a glass of wine in hand, Addonizio chronicles the joys and indignities of being a writer, the optimistic bloom of new love followed by the crushing low of its unraveling, and the emotional obstacle course of familial ties.

At once intimate and outrageous, BUKOWSKI IN A SUNDRESS is a seductive cocktail of wit, heart, and utter originality.

Praise for BUKOWSKI IN A SUNDRESS:

“Addonizio is brash and tender, pissed off and funny, well armored and wounded. Emotions, bravado, and empathy run high in her award-garnering poetry and novels, and she now taps into the wellsprings of her creativity in this rollicking and wrenching memoir-in-essays. . . . Always vital, clever, and seductive, Addonizio, a secular Anne Lamott, a spiritual aunt to Lena Dunham, delivers shock and awe, humor and pathos with panache.” —Booklist

“This ‘Emily Dickinson with a strap-on’ as she calls herself, is ruthlessly honest and writes so well that no matter what she’s excoriating or dissing or musing about becomes immediately fascinating . . . the life of this poet is . . . captivating. An unrelenting, authentic, literary midnight confession.” —Kirkus Reviews

“Like Anne Lamott . . . Addonizio seems to sense how to pull back from sentimentality, be it with humor, honesty, or clarity of vision.”—Los Angeles Times 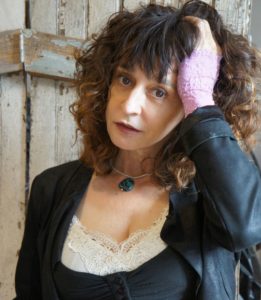 Kim Addonizio is an award-winning author of fiction, essays, and poetry. She has received numerous honors for her work, including the John Ciardi Lifetime Achievement Award and fellowships from the Guggenheim Foundation and the National Endowment for the Arts. Her poetry collection Tell Me was a finalist for the National Book Award, and she has won Pushcart Prizes for both poetry and prose. She is also the author of two hugely successful guides for beginning poets, The Poet’s Companion and Ordinary Genius, and has taught writing workshops in New York City, the Bay Area, and at conferences across the country.

Were there any parts of your life that you felt were off limits for this memoir? How did you go about shaping the book?

Hey, even “confessional” writers have their secrets! That said, I was focused on how to structure the book around both writing and life, and giving weight to each of those things—which for me are so intertwined they often feel inseparable. I had a very different manuscript originally, one that revealed a lot about the ending of a long-term relationship.  It wasn’t until I hit on that writing/life dynamic that I was able to finish the book.  And now I’m glad all that other stuff didn’t end up being in it—partly because I didn’t want to be unkind to that person. Revenge memoirs probably aren’t a good idea.  You need to step back at a certain point.

In addition to being a prolific writer, you’ve played harmonica in various bands. The relationship between music and writing—especially poetry—has long been a continuous one. Does focusing your creative energy on other arts like music affect your writing process, or is it more of an escape?

Music, especially the blues, has definitely influenced my poetry and my performance of it. I don’t think that’s true of my prose. And music is also, definitely, an escape sometimes, a room to go into when the writing isn’t happening. Studying music also reminds me of how much work goes into any creative endeavor, and reminds me that if I keep working, I’ll get closer to solving the problems of a particular piece of writing.

You were once characterized as “Charles Bukowski in a sundress.” Given the level of regard Bukowski is afforded in prestigious literary circles, it’s hard to believe the comparison was meant as a compliment. In the collection, you express your preferences for other characterizations, like “Gerald Manley Hopkins in a bomber jacket,” “Walt Whitman in a sparkly tutu,” or “Emily Dickinson with a strap-on.” Are you still adverse to the Bukowski comparison? How do you confront the unfair, petty, or sometimes belittling criticisms that writers often face, especially women writers?

Of course I’m being facetious about those comparisons. I guess it’s human nature to put people into categories—which is useful, but can be limiting or reductive. I’m always open to honest criticism. As for unfair, petty, and belittling critics, I say, Fuck you. Because that’s what they’re saying to me. And yes, women writers—don’t get me started! Right now I’m rereading Rebecca Solnit’s Men Explain Things to Me. She talks about silencing and “the necessity of making women credible and audible.” That’s what it’s about, on the personal, the cultural, the societal level. We could bring race and class and sexuality into this, too. Why was #BlackLivesMatter necessary? Because everyone knows that those lives, in so many ways that play out every day, don’t matter as they should.

You write candidly about your romantic relationships. What was it like to commune with the ghosts of relationships past? Did you gain any new insights into these men or yourself in the process?

Maybe this circles back, in some way, to the first question about “God’s honest truth.” There’s so much left out of all of those stories, and while they’re true, it’s impossible to tell, or understand, the whole story of those relationships and what they meant. I’m an awfully slow learner in terms of romantic love. I don’t seem to know how to make it work. It would help, for starters, if I knew how to get a date with someone who was actually in the ballpark.  The men I’ve encountered in the past few years aren’t even in the parking lot having a tailgate party. That probably, actually, says a lot about the work I’ve got to do on myself.  But I’m lazy that way. I’d rather write.

****Giveaway Ends 7.9.16 and open to all who can legally enter.
US only – must be over 18 or have your parents permission to enter.
An email will be sent and you have 48 hours to reply or a new winner will be chosen.
Winner will be announced within 48 hours at the end of the giveaway.
Giveaway is organized by Bookhounds and sponsored by the publisher !
It has no affiliation with Facebook, Twitter or any other entitiy.
Void where prohibited.**
Not Responsible for lost, stolen or misdirected prizes.**