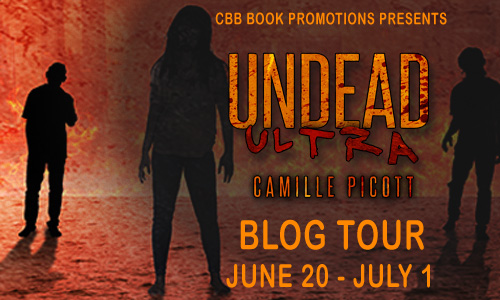 Welcome to my tour stop for Undead Ultra (A Zombie Novel) by Camille Picott! This is an adult post apocalyptic horror novel and the tour runs June 20 through July 1st with reviews, interviews and excerpts. Check out the tour page for the full schedule! 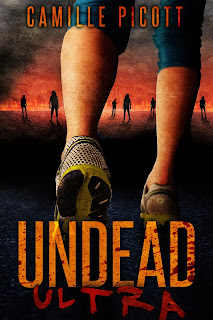 Undead: a reanimated corpse with a craving for human flesh.
Ultramarathon: any footrace longer than a traditional marathon (26.2 miles).

For ultrarunners Kate and Frederico, a typical Saturday morning is spent pounding out a twenty- to thirty-mile “fun run.” It’s during one of their runs that an insidious illness descends upon northern California, turning humans into flesh-shredding zombies.

When Kate receives a desperate call from her son, Carter, she and Frederico flee their hometown and set out to help him. The only problem? Carter attends college over two hundred miles away and the freeways—clogged with car wrecks, zombies, and government blockades—are impassable. Running back roads and railroad tracks becomes their only means of travel, but neither of them has ever run so far before.

As pain, injuries, hunger, and fatigue plague them, getting to Carter and staying alive seem impossible. It’s either outrun the undead or become one of them, and for Kate, death is not an option. 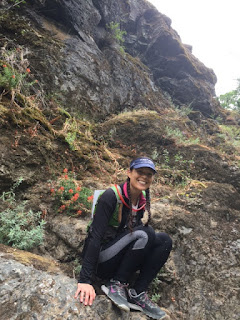 Camille Picott has been writing novels since she was twelve. When she’s not working on a book, spending time with family, or whipping up a new vegetarian meal, you can find her trail running in Sonoma County, California.

Leaves on the Wind—the fourth Serenity graphic novel. I just adore this world and it’s characters! The show might have been cancelled, but it’s great the story can continue for the fans.

Diana Rowland is one of my current favorites. I very rarely read an entire series, but I’ve read all of My Life As a White Trash Zombie and most of the Kara Gillian books. She writes great characters and I just can’t get enough of them!

I’m definitely a go-with-the-flow girl. I have basic ideas of the direction I want to go, but I wing it from place to place. I tend to approach a lot of things in life with way.

I’m a fan of the f-bomb. That single word can have so many nuances and meanings! I refrained from using swear words in my other books, but I let loose in Undead Ultra. I figure if there’s any genre that needs f-bombs, it’s a zombie book.

I’m a cat fanatic! I have a 10-year-old cat named Zero and a 1-year-old named Disco.

GIVEAWAY:
Two (2) $5 Amazon gift cards (INT)
Ends July 6th
Prizing is provided by the author, hosts are not responsible. Must be 13 or older to enter and have parental permission if under 18. Void where prohibited by law. No purchase necessary to win.