by Lynne Graham
Published by Harlequin 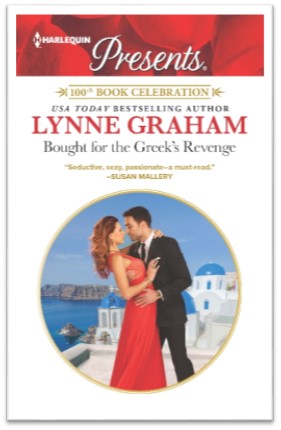 Ella Palmer has neither the money nor the connections to warrant the interest of Nikolai Drakos’s archenemy. Yet the unassuming beauty has done just that—and claiming her will be Nikolai’s ultimate satisfaction!

The ruthless tycoon will use any means necessary to ensure Ella’s compliance, so he buys out her family’s debts. Debts he’ll forgive if Ella becomes his mistress. But when he discovers the true extent of her innocence, Nikolai is forced to consider something new; it appears the indomitable Greek is about to take a bride!

Nikolai Drakos is determined to have his revenge against the man who destroyed his sister. So stealing his enemy intended fiancé seems like the perfect solution! Until Nikolai discovers that woman is Ella Davies.

Shock had welded Ella’s tongue to the roof of her mouth because he was sexually propositioning her and nothing could have prepared her for that. She wasn’t drop-dead gorgeous… he was! Male heads didn’t swivel when Ella walked down the street because she had neither the length of leg nor the curves usually deemed necessary to attract such attention. Why on earth could he be making her such an offer?

‘But we don’t even know each other,’ she framed dazedly. ‘You’re a stranger…’

‘If you live with me I won’t be a stranger for long,’ Nikolai pointed out with monumental calm.

And the very sound of that inhuman calm and cool forced her to flip round and settle distraught eyes on his lean darkly handsome face.

‘You can’t be serious about this!’

‘I assure you that I am deadly serious. Move in and I’ll forget your family’s debts.’

‘It’s not crazy to me,’ Nikolai asserted. ‘When I want anything, I go after it hard and fast.’

Her lashes dipped. Did he want her like that? Enough to track her down, buy up her father’s debts, and try and buy rights to her and her body along with those debts? The very idea of that made her dizzy and plunged her brain into even greater turmoil. ‘It’s immoral…it’s blackmail.’

‘It’s definitely not blackmail. I’m giving you the benefit of a choice you didn’t have before I came through that door,’ Nikolai Drakos fielded with glittering cool. ‘That choice is yours to make.’

‘Like hell it is!’ Ella fired back. ‘It’s a complete cheat of a supposed offer!’

Nikolai sent her a gleaming sideways glance. ‘No the real cheat was you kissing me the way you did last year and then saying no and acting as if I had grossly insulted you,’ he murmured with lethal quietness.

‘You did insult me!’ Ella flung back, her cheeks hot as fire while she wondered if her refusal that night had started off his whole chain reaction. What else could possibly be driving him?

Nikolai straightened lazily as he opened the door. ‘If you take offence that easily, maybe it’s just as well that the answer is no.’

Don’t miss
bought for the greek’s revenge by Lynne Graham,
available June 2016 wherever
Harlequin® Presents books and ebooks are sold.

Lynne Graham lives in Northern Ireland and has been a keen romance reader since her teens. Happily married, Lynne has five children. Her eldest is her only natural child. Her other children, who are every bit as dear to her heart, are adopted. The family has a variety of pets, and Lynne loves gardening, cooking, collecting allsorts and is crazy about every aspect of Christmas.

****Giveaway Ends 6. 16.16 and open to all who can legally enter.
US only – must be over 18 or have your parents permission to enter.
An email will be sent and you have 48 hours to reply or a new winner will be chosen.
Winner will be announced within 48 hours at the end of the giveaway. Giveaway is organized by Bookhounds and sponsored by the publisher
It has no affiliation with Facebook, Twitter or any other entitiy.
Void where prohibited.**
Not Responsible for lost, stolen or misdirected prizes.** 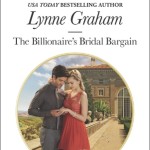