The publisher Publisher of the media / book has provided me with a review copy at no cost. Opinions are my own. Smoke: A Novel by Dan Vyleta
ISBN: 0385540175
Published by Doubleday on May 24th 2016
Genres: Fantasy & Magic, Fiction, Historical, Religion, Science Fiction
Pages: 448
Format: ARC
Source: Publisher
Goodreads 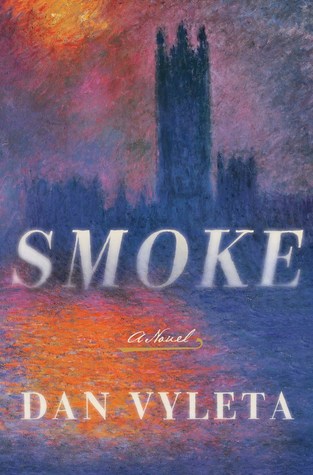 England. A century ago, give or take a few years.

An England where people who are wicked in thought or deed are marked by the Smoke that pours forth from their bodies, a sign of their fallen state. The aristocracy do not smoke, proof of their virtue and right to rule, while the lower classes are drenched in sin and soot. An England utterly strange and utterly real.

An elite boarding school where the sons of the wealthy are groomed to take power as their birthright. Teachers with mysterious ties to warring political factions at the highest levels of government.  Three young people who learn everything they’ve been taught is a lie—knowledge that could cost them their lives. A grand estate where secrets lurk in attic rooms and hidden laboratories. A love triangle. A desperate chase. Revolutionaries and secret police. Religious fanatics and coldhearted scientists. Murder. A London filled with danger and wonder. A tortured relationship between a mother and a daughter, and a mother and a son. Unexpected villains and unexpected heroes. Cool reason versus passion. Rich versus poor. Right versus wrong, though which is which isn’t clear.

DAN VYLETA is the son of Czech refugees who emigrated to Germany in the late 1960s. He holds a Ph.D. in history from King’s College, Cambridge. Vyleta is the author of three novels, Pavel & I, The Quiet Twin, which was shortlisted for the Rogers Writers’ Trust Fiction Prize, and The Crooked Maid, which was a finalist for the Scotiabank Giller Prize and won the J.I. Segal Award. An inveterate migrant, Vyleta has lived in Germany, Canada, the United States and the United Kingdom. He currently resides in Stratford-upon-Avon in England.
Website Twitter  Facebook

I wasn’t sure if this story is a basic, young-adult dystopian or a massive Sci-Fi epic, it turns out it is a mixture of both.  The story which reminds me of Dickens, filled with heroes and villains, is a retake on the Victoria era and filled with religious icons.  Children are born evil and smoke-filled which can only be cleansed by exposing their sin.  They are left to caretakers who are expected to absorb their sins as they appear as smoke.  Caught lying, you can be seen with whisps of smoke staining your clothes. As the children age, the upper class are sent to boarding schools were the “smoke” is basically beat out of them.
The story centers around Thomas and the fact that his father has commited a crime and that sin is carried on in him.  When Thomas visits his uncle, he meets Livia, whose mother is researching smoke in her laboratory (a bit of steampunk) and there is the basis for the rest of the story. While the majority of the characters are young adults, I think this one has more adult themes but I bet there were be a lot of teens wanting to read this one since I felt it had some shades of Harry Potter.
I really enjoyed it but felt that there was a bit too much detail.  I am more of a “dialogue” person and descriptive elements.  I loved the different viewpoints of each character and how easily it switched between them for each chapter.

**Giveaway Ends 5.31.16 and open to all who can legally enter.
US only – must be over 18 or have your parents permission to enter.
An email will be sent and you have 48 hours to reply or a new winner will be chosen.
Winner will be announced within 48 hours at the end of the giveaway. Giveaway is organized by Bookhounds and sponsored by the publisher
It has no affiliation with Facebook, Twitter or any other entitiy.
Void where prohibited.**
Not Responsible for lost, stolen or misdirected prizes.