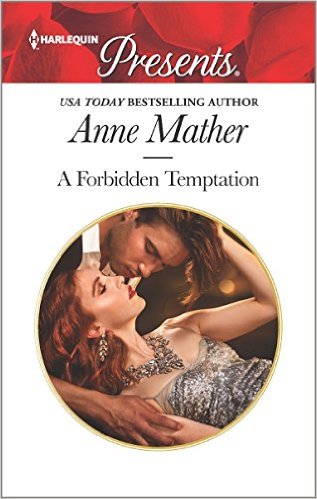 With the death of his wife still raw, Jack Connolly’s mood is dark and dangerous. He’s not looking for a woman, until he meets buttoned-up but beautiful Grace Spencer, who stirs his senses back to life. Yet Jack cannot act on his feelings, as Grace belongs to another!

Trapped in a fake relationship to safeguard her family, Grace knows crossing the line with Jack would risk everything she holds dear. Beneath the hunger she sees in Jack’s eyes is the promise of something more…but is it enough for her to surrender to a taste of the forbidden?

Anne Mather always wanted to write. For years she wrote only for her own pleasure, and it wasn’t until her husband suggested that she ought to send one of her stories to a publisher that they put several publishers’ names into a hat and pulled one out. The rest as they say in history. 150 books later, Anne is literally staggered by the result! Her email address is mystic-am@msn.com and she would be happy to hear from any of her readers.

The phone was ringing as Jack walked into the house.

He was tempted not to answer it. He knew who it would be. It was at least three days since his sister-in-law had contacted him. Debra seldom ignored him for very long.

But she was—had been—Lisa’s sister, and he supposed she was only looking out for him. The truth was, he didn’t need looking out for, he thought resignedly. He was doing just fine on his own.

Dropping the bag containing the still-warm baguette he’d bought at the village bakery onto the granite counter, Jack hooked the kitchen phone from the wall.

‘Connolly,’ he said, hoping against hope that it might be a cold call. But those hopes were dashed when Debra Car-rick came on the line.

‘Why do you insist on turning off your mobile phone?’ she greeted him irritably. ‘I called you once yesterday and twice today, but you’re never available.’

‘And good morning to you, too,’ Jack commented drily. ‘And why do I need to carry a mobile phone every place I go? I doubt there’s anything you need to tell me that can’t wait.’

‘How do you know that?’ Debra sounded offended now and he stifled a groan. ‘In any case, what if you had an accident? Or if you fell off that stupid boat of yours? You’d wish you had some means of communication then.’

‘If I fell off the boat, the phone wouldn’t work in the water,’ replied Jack mildly, and he heard Debra give an impatient snort.

‘You’ve always got an answer, haven’t you, Jack?’ she demanded, her frustration evident. ‘Anyway, when are you coming home? Your mother’s worried about you.’

Jack acknowledged that the worrying part might be true.

But both his mother and his father—and his siblings, come to that—knew not to ask those kinds of questions.

They’d accepted that he needed to move away from the family. And this house he’d found on the wild Northumbrian coast was exactly where he wanted to be.

‘This is my home,’ he said now, glancing round the large farmhouse kitchen with a certain amount of pride.

When he’d bought the house, it had been in a sorry state of repair. But after months of his living out of suitcases and cardboard boxes, the renovation—a lot of which he’d done himself—was now complete.

Lindisfarne House had emerged as a comfortable, but elegant, home. The ideal place to find refuge and decide what he was going to do with the rest of his life.

‘You’re not serious!’ He’d almost forgotten what his answer had been until Debra spoke again. ‘Jack, you’re an architect! A successful architect at that. Just because you’ve inherited that money doesn’t mean you have to spend all your time bumming around some godforsaken corner of England!’

‘Rothburn is not a godforsaken corner of England,’ protested Jack civilly. ‘And certainly no more remote than Kil-pheny itself.’ He sighed. ‘I needed to get away from Ireland, Debs. I thought you understood that.’

Debra sniffed. ‘Well, I do, I suppose,’ she conceded. ‘I’m sure your grandmother’s death was the last straw. But all your family’s here. Your friends are here. We miss you, you know.’

‘Yeah, I know.’ Jack could feel his patience thinning nonetheless. ‘Look, I gotta go, Debs.’ He grimaced at the lie. ‘There’s someone at the door.’

With the phone hooked back onto the wall, Jack spread his hands on the cool granite for a moment, breathing deeply. It wasn’t her fault, he told himself. Just because every time he heard her voice he found himself thinking about Lisa didn’t make her a bad person.

For God’s sake, he just wished she would get off his case.

The light, half-amused tone broke into his bleak mood of introspection. He lifted his head to find Lisa seated on the end of the counter, examining her nails. She was dressed in the same cropped pants and silk blouse she’d been wearing the last time he’d seen her. One high-heeled sandal dangled from her right foot.

Jack closed his eyes for a moment and straightened from his stooped position.

‘You don’t know that,’ he said flatly, and Lisa lifted her head and met his brooding gaze.

‘Oh, I do,’ she insisted. ‘Debs has been in love with you for years. Ever since I first brought you home to meet Daddy.’

Jack turned away and picked up the baguette he’d brought home from the bakery. Despite his conversation with Debra, it was still warm, and he switched on the coffee pot and took a dish of butter from the fridge.

Slicing himself a generous wedge of the baguette, he spread it thickly with butter. Then forced himself to eat it, even though he disliked having her watch him do so.

‘Are you going back to Ireland?’

Lisa was persistent, and, although Jack despised himself for humouring her, he turned his head. She was still sitting on his counter, a pale ethereal figure that he knew from previous experience could disappear in an instant. But today, she seemed determined to torment him and he lifted his shoulders in a careless shrug.

‘What’s it to you?’ he asked, lifting a mug from the drainer and pouring himself some coffee. Strong and black, the way he liked it. ‘You don’t like Northumberland, either?’

‘I just want you to be happy,’ Lisa said, spreading her fingers as he’d seen her do a hundred times after she’d applied a coat of varnish on her nails. ‘That’s why I’m here.’

Jack was sceptical. In his opinion, she was doing her best to make people think he was crazy. He was talking to a dead person, for God’s sake. How insane was that?

A draught of air blew across his face and when next he looked, she was gone.

She left nothing behind. Not even the faint trace of the perfume she’d always worn. Nothing to prove he wasn’t going out of his mind as he sometimes suspected he was.

In the beginning, Jack had dismissed Lisa’s appearances as a mental aberration. Even so, he’d gone to see a doctor in Wicklow who, in turn, had sent him to a psychiatrist in Dublin.

The psychiatrist had been of the opinion that it was Jack’s way of grieving. And as no one else saw Lisa, Jack had half believed he might be right.

But the visitations had continued, sometimes with days, at other times weeks, in between. Jack had become so inured to them that they didn’t worry him any longer.

Besides, he’d never felt that Lisa wanted to hurt him. On the contrary, she always appeared as quirky and capricious as she’d been in life.

Jack scowled and carried his coffee out of the kitchen and across a wide panelled hall into a sunlit living room.

The room was large, high-ceilinged and furnished with dark oak and leather. Pale textured walls contrasted with the beams that arched above his head, long windows overlooking the coastline and the blue-grey waters of the North Sea.

There was a leather rocking chair set in the window embrasure and Jack seated himself in it and propped his booted feet on the sill. It was early yet, barely nine o’clock, and the day stretched ahead of him, silent and unstructured.

Which was also the way he liked it.

**Giveaway Ends 3.10.16 and open to all who can legally enter.
US only – must be over 18 or have your parents permission to enter.
An email will be sent and you have 48 hours to reply or a new winner will be chosen.
Winner will be announced within 48 hours at the end of the giveaway. Giveaway is organized by Bookhounds and sponsored by the publisher
It has no affiliation with Facebook, Twitter or any other entitiy.
Void where prohibited.**