Music meets Movies in this sweet college romance from the bestselling author of Cinder & Ella.

NYU freshman Nate Anderson is a triplet who is desperate to escape his wild and crazy brothers. After they screw things up for him one too many times, Nate flees his housing situation and takes the first available room for rent as far from his brothers as he can get.

Enter his new roommate Jordan–a quirky LA girl who believes that everything in life has already been done in the movies. In this heartfelt tale of love, friendship and family, Nate learns how to deal with his new adult life using Hollywood films as a guide.

What readers just like you are saying about If We Were a Movie:
“WOW! This book is great! The concept is so inventive, and the writing is brilliant.”
“I thought Cinder & Ella jerked with my emotions too much but this one might have it beat.”
“I finished reading If We Were a Movie yesterday. I loved it! I fell hard for Nate. Jordan was amazing! And Pearl’s timing was perfect! “

“Amazing concept with movies as chapters, and fantastic storyline.”

“I loved this story and was humming along to the songs from the book whilst reading. I can see this book becoming the movie it was written to be.”

“If We Were a Movie made me want to binge watch movies, listen to old playlists and re-read it all at once.”

TEASER:
“So this is what a Pearl-approved guy looks like.” She shook her head once and cracked a smile. “She’s got good taste, I’ll give her that. You’re an odd mix of sexy and adorable. Don’t see that often.”
I was a little taken aback by the compliment, if that’s even what it was. She may have just been stating what she considered to be fact. She laughed at my surprise and held out her hand to me. “Nice to meet you. I’m Jordan Kramer.”
I’d been afraid of that. “You’re a girl.”
Jordan laughed. “That’s what it says on my birth certificate, but I’m really glad you were able to figure it out without needing to read it.”
Nope. I definitely didn’t need that.

“Music major,” I teased, picking up my keyboard. “I play this, too. A little. And the bass guitar.”

“Awesome.” She examined the electric guitar with awe.

“Why do you seem so surprised?”

She looked at me as if the answer to that question should be obvious. “Hello. Have you met yourself? You with an acoustic guitar singing soft songs around a campfire or in a coffee house makes perfect sense. But I can’t picture you up on a stage, jamming on your electric guitar like a rock star.” She studied me a moment, then shook her head. “You’ll have to play for me, or I’m not going to believe it.”

Author Kelly Oram
Kelly Oram wrote her first novel at age fifteen–a fan fiction about her favorite music group, The Backstreet Boys, for which her family and friends still tease her. She’s obsessed with reading, talks way too much, and likes to eat frosting by the spoonful. She lives outside of Phoenix, Arizona with her husband, four children, and her cat, Mr. Darcy.

Don’t miss the latest news from Kelly Oram! Sign up for her newsletter to receive e-mail notifications for all of her new releases, events, sales, & giveaways. This is a monthly newsletter often with exclusive giveaways and freebies from some of her favorite authors.

The music and movies behind the story (Kelly’s If We Were a Movie playlist)!

As I’ve said many times before, I’m one of those authors who needs peace and quiet to write. I’m a music junkie at heart, and if there is music playing, I will sing (and most likely dance) along. Fun times, but as you can imagine, not the most productive writing environment. So while I’m working, I turn the music off. But I still always have a playlist for each book. It’s usually a group of songs that remind me of a scene, or a certain character, or just have the tone that I’m going for. And while I’m working on the book, I will wear the playlist out. (Just not during writing hours.)

If We Were a Movie, despite its title, is almost more about music than it is about movies. My main character, Nate, is a talented musician on scholarship at NYU. Music is an intrical part of the plot, and hits home for me personally as I was a music major in college too. (For a while anyway…) The playlist I have for this book is closer to an actual movie soundtrack than just a random list of songs this time. (Very fitting.) Most of these songs are referenced in the book as well as that they simply remind me of the story. As you read, feel free to listen along.

The book also has a movie playlist and you can watch along as well. As much as Nate is a music junkie like me, his love interest, Jordan, is a movie fanatic. (Like my Hollywood screenwriter/editor/motion graphics artist husband!) The book is all about comparing life to the movies, and is a play on all the classic romantic comedy tropes that we all love so much. There are dozens of movie references throughout the book. In fact, each chapter is titled after a different movie that has something to do with that chapter. I guarantee after the first couple of chapters you will be trying to guess what’s going to happen next based on the chapter headings! I’m not going to give you that list of movies right now, because it may spoil some of the surprises, but I promise it’s a fun list.

So, are you ready to listen to If We Were a Movie? Here it is in my personal playlist order: (Warning, this is my most eclectic playlist yet!)

Signed copies of V is for Virgin & A is for Abstinence (1 winner, 2 books) 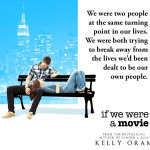 #Giveaway If We Were a Movie by Kelly Oram @kellyo