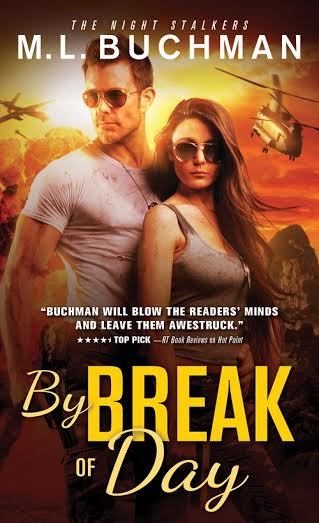 A Note from M.L. Buchman: Captain Kara Moretti is the newest member of the Night Stalkers aboard the USS Peleliu. She and Captain Roberts have just traded a first kiss (or two or three) but now she must face the women of the Night Stalkers. These scenes of the women in a group are so much fun to write and this was definitely another one of those. As an author, I get to look forward to these far more than Kara does.

As a group they unnerved her, and they also filled a table. Until the recent departure of Kee Stevenson and her teenage daughter, Dilya, there hadn’t really been room to join them. Kee was also one of those force-of-nature types that Kara both admired and found a little scary. With her gone, the group looked a little less unnerving. A little.

Connie Davis and Claudia Jean Gibson rarely spoke—scuttlebutt had them as the best mechanic and best Little Bird pilot in all SOAR—which only added to the risk factor of joining them. It was a gathering practically designed to terrify men and humble mere human females.

As Kara was finally settling onto her seat, Justin wandered in beneath that tall, white hat that almost reached to the overhead gray-painted pipes and cable runs. He did a casual scan of the room.

She looked down before she could be caught staring at him. Half alien from another planet and half man she really wanted to kiss again. Which made him even more alien. Sex was fun, a take-it-or-leave-it scenario for Kara. But that kiss, that stupidly simple kiss, had been incredible.

Tray. Focus on your tray. There’s food there.

The chief steward and her crew had served up beef stew and fresh-baked sourdough bread that smelled amazing.

“C’mon!” Trisha urged her, then took a large spoonful of stew and hissed against the heat. Unable to speak, she waved her spoon at Kara to speak.

Kara went for a subject change and turned to Lola. “Is she always this nosy?”

“You have no idea,” Lola commented drily. “Why, what does she have to be nosy about this time, or is it just her normal pushiness?”

Kara did her best to shrug it off, realizing her tactic was on the verge of backfiring on her.

“Cowboy,” Trisha managed to gasp out. Then she took a breath. “Wow! The stew is hot, but really good. So, how was the cowboy? Hot but good? He shore is purty, ain’t he?” Her fake Texas sounded ridiculous in a Boston Irish accent. Kara recalled an elbow in her ribs; no question Trisha had caught the meaning of Justin’s misstep in the debrief.

Trisha sighed happily. “I am. Doesn’t mean I’m blind though.”

“Why should I answer you?”

“Because”—Connie spoke up in that soft voice—“Trisha has over a ninety-seven percent success rate of getting answers with her pestering. Most choose to spare themselves the pain and simply provide requested information.”

Kara eyed the woman. Connie might look like the girl next door with her light-brown hair feather cut to her jaw, but Kara knew there was also a genius lurking behind those eyes. A genius with a photographic memory who just might have actually tallied Trisha’s success rate.

Kara held out her hand toward Trisha, who stared at it in puzzlement for a long moment before she reached out to take it. Kara offered one short handshake.

“Hi. My name is Captain Kara Moretti, and I’m one of the three percent.”

Trisha made a raspberry sound at her as Connie smiled and Lola burst out laughing. Claudia Jean nodded her quiet approval and turned back to her stew. 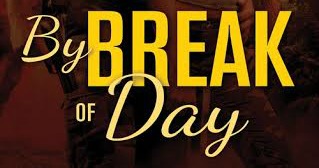 NAME: Kara Moretti
RANK: Captain of the Army’s stealthiest remote piloted aircraft (Don’t call it a drone)
MISSION: To be the eyes of the team

NAME: Justin “The Cowboy” Roberts
RANK: Captain of the Army’s most powerful helicopter
MISSION: To redeem the past, at any cost

They Put Life, Limb, and Heart on the Line

Two new captains join The Night Stalkers with two different strategies in life, love, and combat. When Brooklyn-raised Kara joins the crew, she knows one thing as an absolute truth: to stay safe, keep everything and everyone at a distance. Born in Texas, Justin knows only one honorable way to make up for losing his first crew to a suicide bomber: he flies with all his heart. When Kara and Justin collide on a top secret mission deep in the Israeli desert, then the battle truly begins.

In among his career as a corporate project manager he has: rebuilt and single-handed a fifty-foot sailboat, both flown and jumped out of airplanes, designed and built two houses, and bicycled solo around the world.

He is now a full-time writer, living on the Oregon Coast with his beloved wife. He is constantly amazed at what you can do with a degree in Geophysics. You may keep up with his writing at www.mlbuchman.com.

Want to Win a Copy?

Giveaway Ends 2..10.16 and open to all who can legally enter.
US only – must be over 18 or have your parents permission to enter.
An email will be sent and you have 48 hours to reply or a new winner will be chosen.
Winner will be announced within 48 hours at the end of the giveaway. Giveaway is organized by Bookhounds and sponsored by the publisher
It has no affiliation with Facebook, Twitter or any other entitiy.
Void where prohibited. 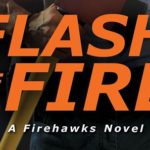